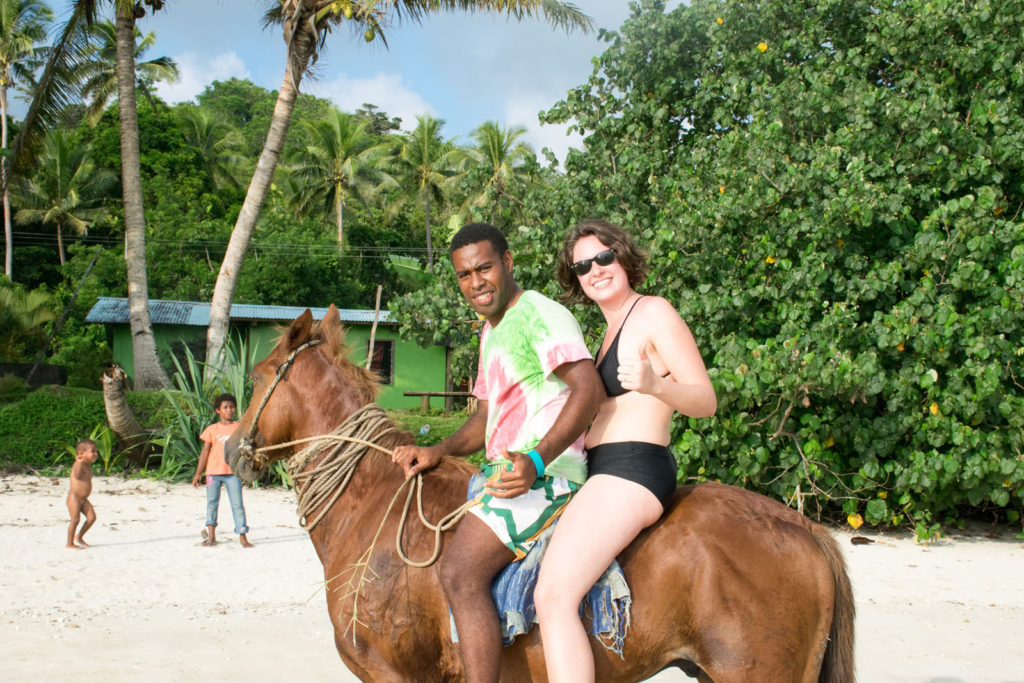 I was holding my mother’s DSLR, wearing only a bikini, and was alone on a beach in Fiji. My offer came from a dark stranger on a horse.

I didn’t hesitate. “No thanks.” I declined, smiling. I wasn’t sure why I said no, it was more an impulse than anything. Living in New York City taught me from a very young age that you don’t accept rides from strangers, especially when you’re practically naked holding a one-thousand-dollar camera.

The stranger asked me a few more questions about where I was from. He seemed nice and genuine. “Are you sure you don’t want a ride?” He asked again, patting the horse’s butt. I couldn’t refuse, the curiosity was killing me: I had seen a tourist on a horse earlier in the day when we first arrived to the beach. And here was an opportunity to ride one and not pay for it!

The man, whose named I learned was Simon, held out his hand. I was reminded of Aladdin holding out his hand to princess Jasmine in the Disney movie and thought about how this was about as close to a magic carpet ride I was going to get while in Fiji. I took his hand and he hauled me up onto his brown horse which immediately started to pick its way along the beach.

We chatted about this and that. I told him about New York. He told me about his favorite food and his village. He seemed genuinely curious about my life.

The horse teetered wildly around rocks and coral, picking its way like a mountain goat along a particularly black and rocky stretch of the beach. I suddenly panicked about how I’d get back: I had no shoes and these rocks looked sharp. Sensing my fear Simon asked if I wanted to be dropped off again. I said no. I wanted to see his village. He clicked at the horse and we stumbled on.

Two small boys were fishing in the surf. As we approached Simon called out to them in their language. They responded but stared at me. I felt like a giant: my long white limbs (pink now from a sunburn) my flabby figure pressed up against the lean local, dangling a camera from my shoulder… I dared not take a picture for fear of fully cementing the stereotype.

Turning the horse around at my request to drop me back off at the beach I had come from, I asked Simon how to address the boys we had seen fishing “Simon? How do you say ‘what’s your name?’ in your language?”. He murmured a string of words. I called out to the two boys. They yelled their names simultaneously, grinning at me. I smiled back and waved, gripping the horse with my thighs. “Natalie!” I called back feeling less like a grub than before.

As we approached my beach I saw Jackson in the distance. He was combing the beach for me. I wondered how long I’d been gone. Simon asked if we shouldn’t gallop over to Jackson. I giggled, unsure as to whether I wanted him to or not. Picking up a trot we met up with Jackson. He snapped a shot of me on the horse. I clambered down. “Thanks, Simon.” I said. “That’s an experience I won’t forget!” He waved and galloped up the beach.