Home / Blog / Oceania / Fiji / Hiking in Fiji: A Day of Getting Off the Beach 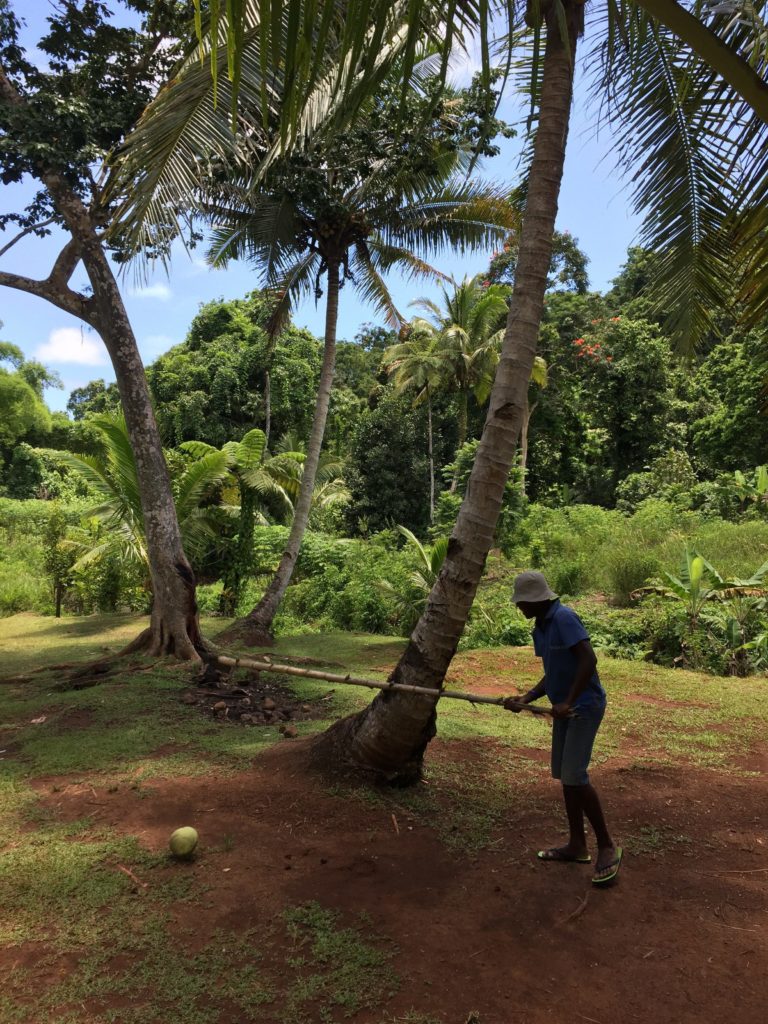 Fiji is everything the pictures made it out to be: lush, green and full of beaches. This does get a little boring after a few days and then you start googling “Fiji activities” just to fill in the time, like we did. Thankfully, hiking in Fiji is fun and easy and a great way to see more of the island you’re on.

We decided to take it low and slow the first few days at The Beachouse in Fiji. Other than the horse ride on our first full day, Saturday and Sunday were quiet and full of reading.

The Wifi was down so we couldn’t do much more than nap, lounge and nurse our ridiculous sunburns.

Note: don’t make our rookie mistake and think that a light coating of SPF 30 on your face and shoulders is enough. For god’s sake: slather on that sunscreen!

Monday found us more uppity and we decided to sign up for a 4-hour hike at $10 FJD each (about $5 USD each). We booked the hike through the lodge. They had a big activity board full of Fiji activities that tourists can participate in.

Juta, a grizzly, white-bearded islander with a white gauze patch on his neck, greeted us with a “Bula!” and promised to be our guide. 3 more women joined us: Lee, a former Australian flight attendant; Maria, a German professor teaching in Guam; and Andrea, a Filipino currently pursuing a doctorate in archaeology in Australia.

The 5 of us practically jogged to keep up with Juta (whom we half joked was probably 80 years old) who stopped briefly on the road to ask his daughter for a pair of sneakers so that Lee could wear something other than flip-flops. “There’s a lot of mud up there.” Juta promised, “but don’t worry, my friend, if you lose your shoe I will go back and find it. No problem.” What a champ.

Juta lead us past a school with the Korean flag and then explained how Jesus had blessed his people and that the heathen god was gone and God was so helpful to his people because he sent the Koreans to build this school. It was a rather long-winded way of explaining a little about the local village and gave Jackson and I the full blast of Christianity that we had read the Fijians possessed, but hadn’t seen until that point.

I looked at the other 3 as Juta talked, but all remained stone-faced and polite while Juta went on to bless all of us and congratulate God again on the wonderful gift of bringing the British to the Island to give them all Jesus. I wanted to ask about what the “false god” the locals had worshiped was like– and what that god was doing now that he’d been laid off– but thought better of asking.

Juta took us deep into the jungle along a very muddy path (it had poured the day before). It was steamy and hot, but there were a lot of rivers and we walked through each one, the milky water felt so cleansing on our mud-caked feet. Hiking in Fiji is hard work! The big island of Viti Levu is not flat, and has a very mountainous interior. To do Fiji activities, means you are either climbing over rocks to get to a waterfall or you’re out on the surf catching a wave.

Juta, the bad-ass that he was, kept bounding ahead of us. He then took the hike to the next level by plunging his water bottle into a stream and taking a long drink, grinning at us as he did so (I guess the tourists he takes on this hike would have gasped at this point?). I was tempted to do the same, but thought the potential parasites in the water might not like me very much. Locals have great gut bacteria!

The hike was to a waterfall, about an hour uphill. We scrambled over boulders and roots, up ravines and down slippery slopes avoiding huge amounts of caterpillars (they were EVERYWHERE and it was really easy to slip and fall on one of the squished dead. Yuck!). One of the local dogs followed us. The bitch would run ahead and then come back, herding us toward the promise of a cool dip.

The waterfall was very secluded. No one else but the 6 of us were there. Juta took a seat and directed us into the water. It was delightful. We paddled around the pool a bit before Juta stood up and started barking directions. “YOU!” he shouted at Lee over the roar of water, “stand up there! On the falls! Yes! All of you! Go!” We dragged ourselves up the slippery rocks and sat as Juta snapped a shot with Maria’s camera. “NOW! GO! INTO THE WATER!” He gestured wildly indicating that we needed to stand in the falls. We did after a lot of difficulty because that water was coming down hard! Juta snapped another few shots. He was a pro.

Fiji activities generally include a lot of smiling and getting smacked by rushing water.

Sitting on the rocks for a breather before the march back, Juta asked me why Jackson looked so red and if his skin was really like that (or did he just mess up at life?). I told him it was all a sunburn and, no, my husband was not a lobster. Pale people, amairight?

The walk back was far quicker. It was all downhill and sliding in the mud really made coming down much faster. We arrived at a small hut where Juta’s niece had prepared roti and curry wraps for us ($4FJD/ea for all of it, that’s about $2USD). The pumpkin curry was delicious and steamy, which I held by my finger tips to avoid burns. We were also given a fresh coconut. The juice was cool and a little fizzy and tasted like nectar of the gods. If you here, you MUST try a fresh coconut! It’s great after hiking in Fiji.

Little boys were stalking the hut and laughing at us. They kept screaming “BULAHHH!” at us before breaking into giggles and circling back to the matron. Juta told us the largest group he’d taken was 37 Canadians. I tried to imagine that big a number standing by that tiny hut: too many people!

As we walked home Juta pointed out a watering hole. “You want to jump in? It will be good to be wet for the walk back!” There was a drop down to what looked like a stream. Juta pointed at his son who had followed us clearly for the intention of jumping in. “Jump in and show them!” Juta barked. The boy bounded into the stream like he’d probably done a million times before. He smiled as his head popped out of the water.

Jackson threw his clothes off. Juta started to count to 3. Jackson jumped. My turn! Here’s another classic example of Fiji activities to do: jump in a river or a stream!

The jump was long enough that as I fell I wondered what the very hell I was doing. I plunged into the light brown water and came up sputtering. It was delicious. Suddenly a gaggle of local boys came running over to our group. Lee, Maria and Andrea had only just jumped when the boys threw themselves in, laughing and chattering away in Fijian. Little heads kept bobbing and disappearing in the water all wearing smiles and shyly staring at us.

It wasn’t until we got back to the hotel, utterly exhausted by the heat and exertion of hiking in Fiji, did I realize I had a butt rash and Jackson got a stomach bug. Island life can be delightful, but not without a price, I guess.

I’d do it all again if I could.