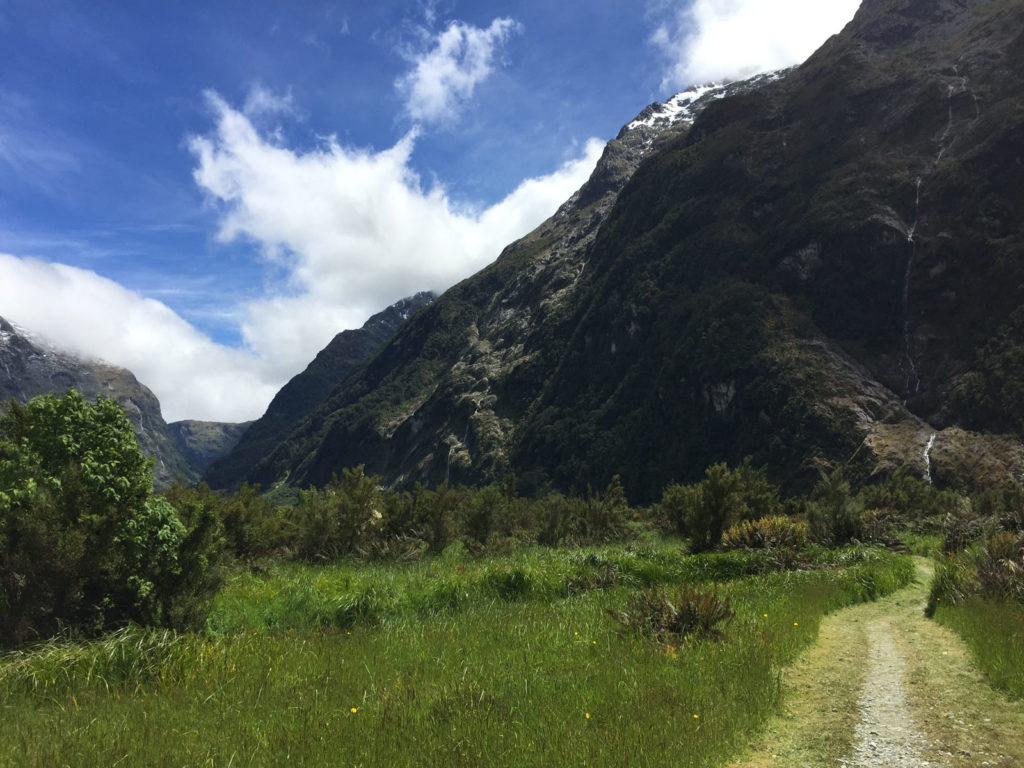 Sleeping in a dorm with 15 other people can be tolerable at best. I am a very light sleeper and even the slightest snore can snap me awake. The first night at Clinton Hut revealed 2 snorers. They were snoring in tandem at one point. I wanted to scream. Instead I laid awake and stared at the ceiling. I eventually got up to use the bathroom (all of which are located outside, and a little bit of a walk) and the stars were incredible! Unfortunately it was only 11:00pm and therefore the glow of sunset was still a slight smudge of the horizon (sunset was around 9:30pm) so I couldn’t get the full beauty of what the sky had to offer, but from what I did see I was in awe.

Around 5:30am people started rustling. Because everyone has plastic bags, getting ready becomes a cacophony of noise. There’s shuffles, snuffles, shifts and creaks. We got on the trail around 7:30am to begin day 2.

The track was lovely: it was sunny and there were birds chirping. As we walked the trees began to thin and we burst out into a valley. The mountains were gorgeous! Peaked with snow the mountains sloped down to a valley carved out millennia before. There were small waterfalls trickling down the sides which ended in icy pools.

We ran into 3 friends we had made the night before: Anna, Kari and Steven. Reading about a pool a few minutes off the track our party turned off the route and searched for the pool. It was a waterfall-fed body of water that was crystal clear and super cold. It wasn’t a particularly hot day, but the sun did have a punch when walking under a 30 pound bag. Jackson and I decided to jump in.

Like I mentioned before: there are no showers on the track so it’s easy to feel grubby. No one in our party seemed keen to jump in, but Jackson was determined. We peeled off our clothes and ran in! It was so cold!! I wanted to see if I could submerge my head, but my body screamed at me. Within a few seconds Jackson and I ran out sputtering.

I felt baptized. The air felt as fresh and warm as a towel. I pulled on some clothes and sat near a rock to enjoy our lunch. The rest of our group decided to jump in after seeing us break the ice. It was fun watching everyone scream and run around naked! Dan declined to get in, but I was most proud of Jen who decided at the last to wade in.

The 8 of us sat still for some time after the dip. It was quiet in the valley and the peace of being alone in nature felt so calming.

The rest of the walk was at times a bit hot. We were warned about rock falls and found a few where we had to trip our way over large boulders. Near the end the path sloped upwards and trudging up felt brutal at the end of a long day. The scenery was beautiful but began to get covered by foliage again. My legs felt like jelly.

Mintaro hut sits facing steep mountains that climb a kilometer high. As we sat staring at them we were told that the following day would be about getting over the ridge and coming down the other side. In the sunshine, basking in the glow of a hard day’s walk and the warmth of the afternoon it was hard to imagine the difficult day to come. It was hard to imagine anything difficult, really. It was so peaceful and isolated.

Kathy, our hiking guru, found us and told us to go to the Heli-pad. It was gorgeous. Mountains on all sides, crystal clear rivers, snow on the peaks, blue sky, sun… like kittens we curled up on the pad and let the wind wash over our faces. It was a lovely day.