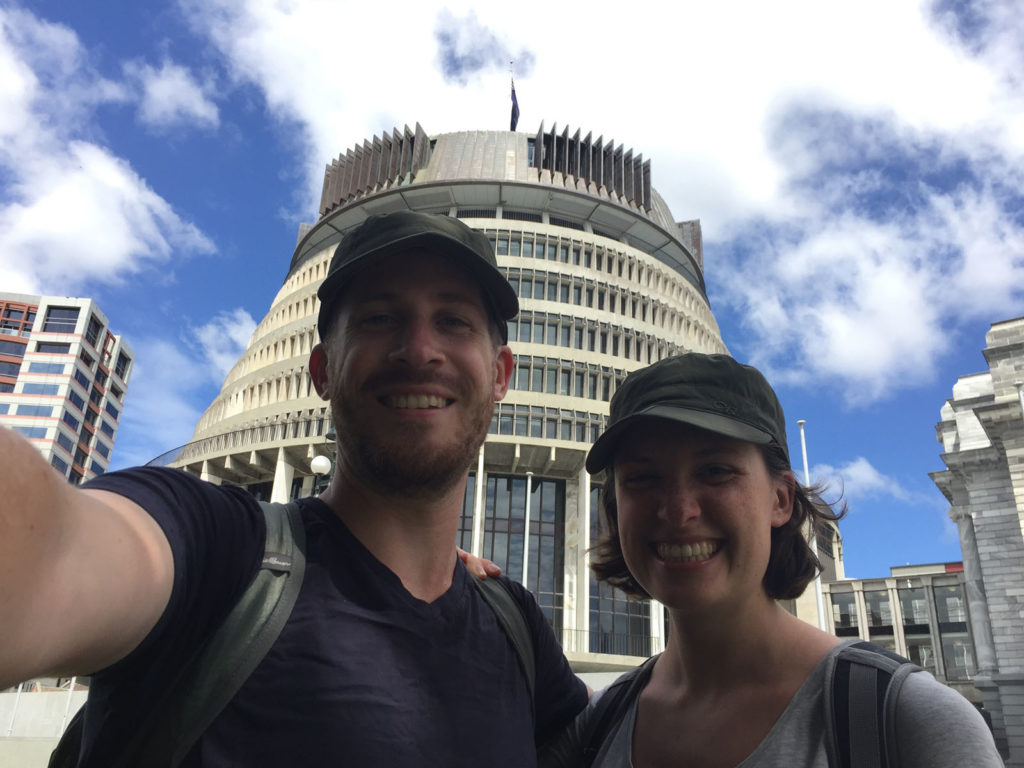 Having never spent time in the North Island, going to Wellington was exciting. I was looking forward to comparing the Capital to Christchurch and observing how a large city in New Zealand looks having not been destroyed by devastating earthquakes.

The flight from Christchurch is quick and easy (35 min) and cost about $90NZD round-trip for each of us. It felt more like a weird bus ride than a plane trip.

We took a butt-crack-of-dawn flight which got us to Wellington around 8:30am. We caught the local public bus which is about a 5 min walk outside the terminal. There is an express bus you can catch at the airport which will run about $9NZD per person or the local which was $5 and perfectly comfortable and easy to catch. You can pay for the bus far on the bus when you step on!! (You know you’re not in NYC when that happens…) Fares are based on zones and we had no idea how much it would cost to get to the center, the bus driver helped us out. Nice and easy.

20 min later we stepped off into a bustling downtown. Where CHch is quiet and flat with a lot of construction going on (see Jackson’s photo rolls) Wellington is stocked with larger buildings, buses, cars and people. We stopped at a cafe called Sixes and Sevens and had a quick bite to eat and some flat whites (New Zealand’s not-quite-a-cappuccino: delicious!).

Heaving our backpacks we walked along the water front which has a very pretty view.

The Gallipoli WWI exhibit at the Te Papa Museum was highly recommended to us by Jackson’s parents and we went to check it out when the museum opened at 10am (free entry!). The exhibit was really well done. Lots of first hand accounts, pictures, interactive props and walkways and large life-like statues. It was a very sobering experience and took about 40 minutes to walk through. Afterwards, Jackson and I felt really emotional and quiet. I think Jackson was even more affected by the stories because that could have been him had he been alive during WWI. I think, above all, the exhibit highlighted how horrible war is in all forms and was a commentary on the loss of innocence. Very well done. We highly recommend a stop-in if you are in town.

Leaving the museum we set off to walk around downtown, heading over to The Beehive and the Parliamentary buildings. Deciding we’d stop inside the Parliament building for a drink of water (the sun came out and it got quite warm! An unusually sunny and windless day in Wellington: not the usual weather by any means!). Inside the building we were invited to join a short 30 min. tour of Parliament (Free!) which we did. Unfortunately, they didn’t allow any pictures inside and we had to check our bags. But, the building was very nice (I think the Beehive looks dated and the tour guide said that 3 days after it won an architectural achievement award it was named one of the ugliest buildings in the world. I believe it! Walking around outside the building could have been something out of Mordor if you slapped on a few gargoyles and spikes…).

After the tour we signed the guest book and sped off for lunch and the Cable Car which takes people up to the top of Wellington to the Botanic Garden.

The Cable Car is $4NZD each way per person. You can get a round-trip but DON’T. It’s so much better walking down the hill through the gardens, which we did.

The Gardens are wild looking. A bit like Milford Trek lite. Lots of trees and shrubs and plants. It’s easy to forget you’re in a major city. The Rose Garden was nice, but I liked the Christchurch rose garden in Hagley park better.

We made our way back to our hostel room for a nap. Jackson booked us a double-occupancy room at “The Set Up on Dixon” which was in a great location, but was pretty forgettable otherwise. The bed wasn’t too comfortable, but the price was right ($74NZD/night for a shared bathroom). It was perfect for the one night, but I would not have wanted to spend 3 days there.

Meeting up with Jackson’s brother, Vince, and his girlfriend, Dina, we went to “Chow” which was having a 2-for-1 night (suuuper sweet! 2 entrees for the price of 1!). Chow was packed, so we went to the bar next door (The Library) for some cocktails before enjoying some Asian fusion. Dina suggested the beef ribs and she was so right: they were delicious!

We sped over to Hawthorn’s (across the street and up the block from Chow’s) for another cocktail. The waitress was delightful, asking us what spirit we favored and bringing over surprises for all of us. She gave me a smoked Old Fashioned served in a glass bottle filled with apple-wood smoke. I haven’t had a cocktail like that and it was delicious ($17NZD).

Deciding on a night-cap, we walked over to Matterhorn which has outdoor seating that’s heated and it was a really nice vibe. They had great modern jazz playing and the mood was chilled out. I ordered a New Zealand Syrah ($12NZD) and we spent the remainder of the evening chatting over wine (and Jackson’s cider).

Before catching our flight out of town, Vince took us to Maranui Cafe. It’s a delightful little restaurant about a 30 min walk from the airport on Lyall Bay, overlooking the sea. I was feeling lucky so I ordered the bagel with smoked salmon (I know I shouldn’t EVER order a bagel outside the Tri-State area of New York, but I was feeling a little nostalgic). The bagel wasn’t bad, but what really did it for me was the fried capers: yum! ($14NZD).

Had we spent another few days in Wellington I’d want to go around the city and see some of the vineyards and surrounding areas. The downtown isn’t too big (especially by NYC standards) and is very walk able. There were lots of shops Jackson and I ducked into to finger the clothing and eye up different summer styles. I’m a terrible shopper so I bought nothing.

Wellington was nice, but I prefer Christchurch from the little I’ve seen. I think Wellington is nice and I’m looking forward to seeing Auckland at some point in the future.