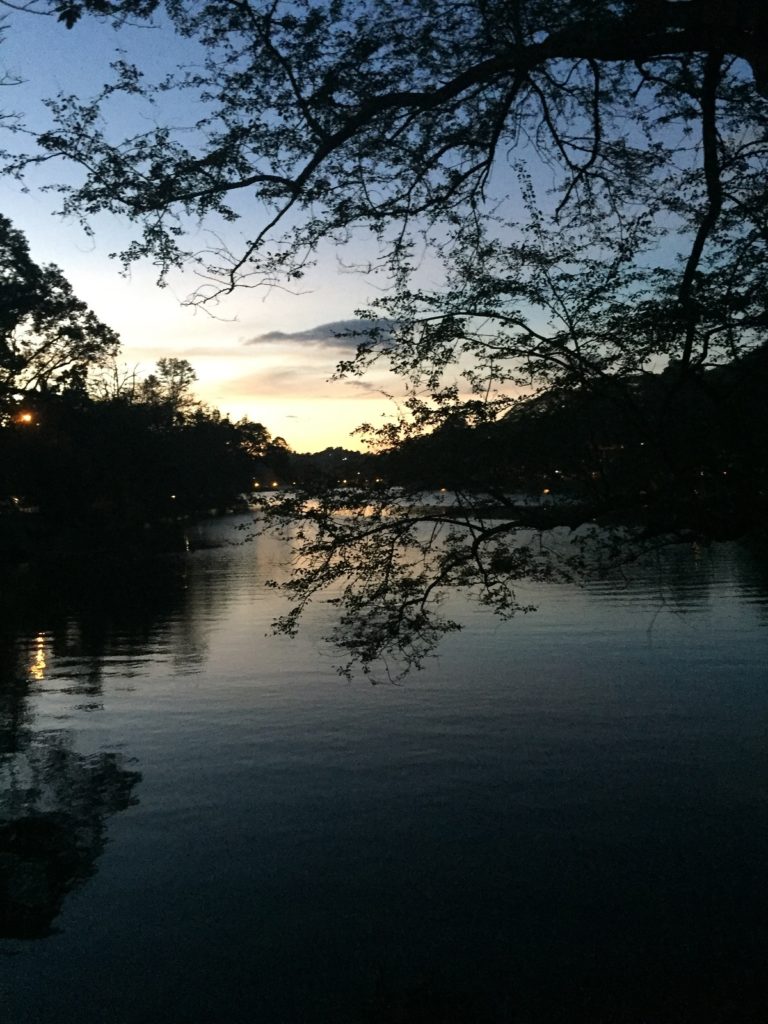 Breakfasting on fresh fruit, yogurt, and an omelet was a great start to the adventure ahead. Our host, Jagath, was very sweet and helpful, he helped us schedule an aryuvedic massage for later in the day (score!).

We set out for the Temple of the Tooth.

According to the Lonely Planet guidebook, this tooth was snatched from the funeral byre of Buddha himself. Over the centuries, it has passed from ruler to ruler until it was supposedly burned by the Portuguese in Goa- or not? There are “fake” teeth, just to throw off those who seek it harm and apparently that was one of them.

The real tooth is now encapsulated in a large golden container and is a shrine to Buddha. It is said that those who go to see it gain good karma.

The compound of the tooth used to be a King’s compound and as such, it is quite large and grand. The temple is beautiful inside: lots of gold leaf, carved wood and stone, and ivory tusks practically dripping from the ceiling.

It is vitally important that the visitor to a Buddhist temple observe the temple rules: no bare shoulders or legs, do not take a picture with your back to the deity, and remove all shoes and hats. Everything else, it seems, is up to the interpretation of the one in charge. For example: tipping the guy who watches your shoes when you enter the temple is mandatory for all “foreigners” and that price seems to change quite drastically from 100LKR to 50LKR (we give 50 for the 3 of us, if we can help it!).

The entrance price for the Temple was 1,500LKR ($10US) each. Cash only. Everywhere. All the time. Even hotels! So, for god’s (or Buddha’s) sake- bring a crap ton of cash with you. ATMs are around, but some don’t work and they can be few and far between.

We made the rooky mistake of going to The Temple on a Sunday so it was crowded. I’ll bet it’s much less so during the week. The line to get to glimpse the tooth was super long and really pushy. I’ve noticed this in India and now in Sri Lanka: the locals seem to have no sense of personal space when it comes to standing in “line”. A “line” is really a suggestion as they’ll push, bump and skip their way to the front. I had one lady behind me fingering my shirt as she waited until she pushed past me and squeezed herself into the next group. The good thing is that everyone is super friendly and chilled out, so even though there might be a hand on your back pushing you forward, the minute you turn around to chew the bastard out it’s some sweet looking grandma who’ll crinkle her face into a large white-toothed smile and the rest of her family, including a 7-month-old baby, will smile as well.

Is the Temple worth a visit? Yes. Will you get a chance to gaze upon the sacred tooth? No. A glimpse is all you’ll get as you’re pushed past the viewing window and onto the next part of the temple. No pictures, either.

We checked in at the Museum of Buddhism (also on the grounds of The Temple) which was just okay. I liked that they exhibited all the different interpretations of Buddhism around the world. However, it seemed like the exhibits consisted of a lot of photocopies of some original document or a picture of a statue that’s now in some other location. It was a little sad, to be honest. Sri Lanka has been picked clean in a lot of ways: first by bandits, then the Indians, then the Portuguese and then the British. Everything left was either a ruin or overlooked. Annie joked that we’d probably see more authentic stuff from Sri Lanka in The Met in New York City and I believe her.

Jackson found a place to get a massage located outside Kandy (Wedamedura Ayurveda) that came to pick us up and drop us off. The massage was 4000LKR each and included a steam bath at the end. I’d had an ayurvedic massage in India in 2008 and remembered liking it. The one we got was very nice. It was a lot of rubbing oils into the skin. Afterwards, my skin felt baby soft and Jackson’s skin looked so fresh: bye, dandruff!

We had dinner at the Garden Café (a decent place to eat that is not in the town center and is nice and cheap, a vegetarian kottu will run about 250LKR) before passing out in bed. Day well spent.