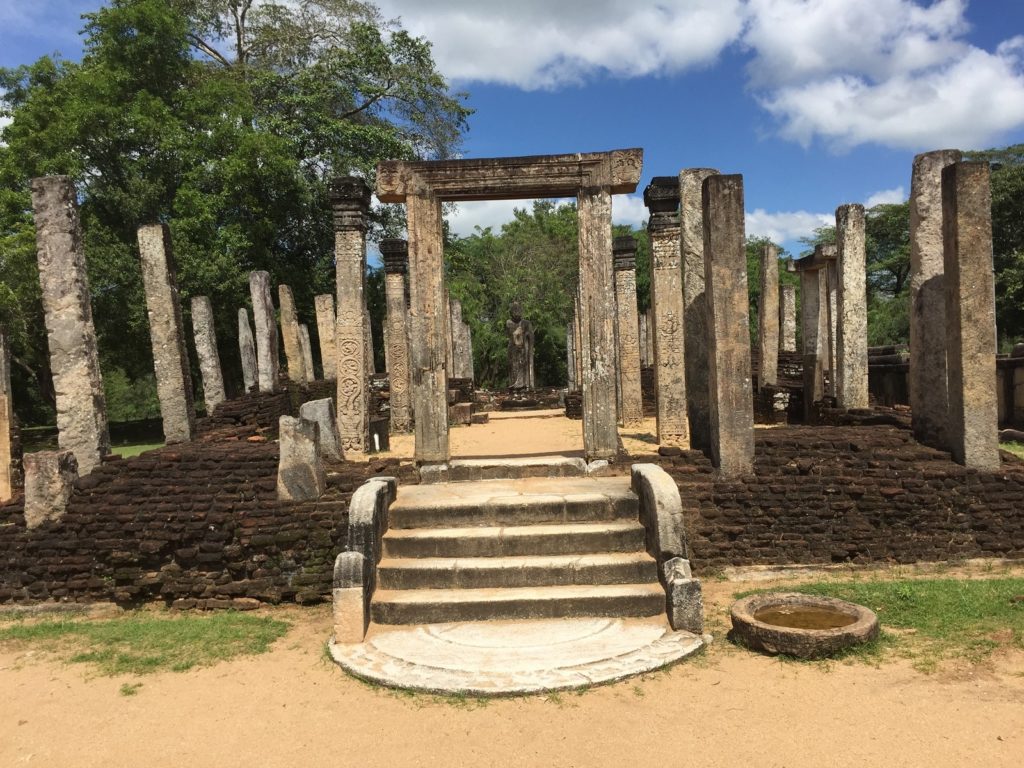 We awoke early, preparing ourselves to meet Nishanta again. This time, he offered to drive us to the bus station to catch the bus to Polonnaruwa. What a guy! We piled into the back of his jeep and motored down a one-lane road (Sigiriya Rd. to be exact) before coming out the other side. Stupidly, I’d thought there’d be some sort of indication that a bus would stop. Not so. Piling out, we stood next to Nishanta’s wife who merely stood on the side of the road and assured us a bus would come and we’d need to get on that. She was going to work, and we were going to have to figure the rest out. Hailing a large, red, screechy bus over we clambered on.

100LKR to get us to our destination and 1.5 hours needed. Polonnaruwa is not super close to Sigiriya.

What’s often the case on these buses is we’re frequently the only white people on them. Tourists just don’t do buses here? Then again, there aren’t many tourists in Sri Lanka outside of the UNESCO sites, so seeing “3 white giants” as Annie put it, always turns a few heads. It’s not animosity or suspicion as I’ve felt in other counties, more bemusement and curiosity.

Polonnaruwa is the 2nd ancient kingdom of Sri Lanka. It was started about 800-ish years ago after the invading Indians sacked Anuradhapura. Polonnaruwa is smaller than its older brother to the north, and it’s more compact: making a tour of the grounds really easy to do in a day.

We walked up a busy road ignoring the millions of tuk-tuk drivers asking us if we wanted a ride around. We decided to rent some bikes and had to haggle like crazy to get an “ok” price: 800LKR for 3 bikes for “3 hours” the guys said (although we held on to those puppies and returned them around 4.5 hours later. Wuddya gon’ do abou’ it???). I think a good price for a bike should be 200LKR for the whole day, to be honest. I would have haggled more, but Annie was eager to get inside.

The ruins are FANTASTIC! Really gorgeous. There were bus loads of tourists at some points and none at all at others. It’s easy to tool around on a bike and much of what there is to see is grouped together in bunches.

At one of the stupas I was walking barefoot (because you need to remove your hat and shoes when entering a holy site) and something bit my foot. I’m still not sure what it was (an ant?) but it HURTTTT, it felt like a shard of glass was grinding into the bottom of my big toe. I couldn’t walk properly after that. Ugh. That sucked.

Getting home was another story. We hopped another bus that the locals assured us would stop at Sigiriya and waited to get home. But… the bus didn’t go toward Sigiriya, it blew right past the stop we had gotten on that morning and motored in another direction. Panicking, we literally jumped off while it was still moving (never done that one before: I don’t recommend it. Scary as hell, although a little Indiana-Jones-like) and sought out a tuk-tuk to take us back down Sigiriya road (the same one Nishanta had taken us down that morning!). Could the people on the bus have meant the road, not the town? We’ll never know. What we do know was that bus was not heading the way we needed. We got fleeced for another 800LKR for a tuk-tuk to take us the rest of the way. Great…

Heading (and in my case: limping) back over to Nishanta’s restaurant for dinner my toe was throbbing. It had swollen up and I was all worried about dying in my sleep of some unknown poison.

Over dinner, Annie mentioned my toe. Nishanta’s eyes widened. “Yes! Little black ant! Yes. Very hurt! You needing uh…” he put his hand to his head to search other the correct word. “One moment.” He called his employee and demanded something. The waiter came over carrying a piece of a shallot.

Nishanta held up the piece of food. “You needing this onion. You put on your foot.” We walked over to me and demanded to see my toe. I held it up. He peeled the shallot, got down on his knees and began rigorously rubbing my foot with the shallot. “Very old way,” he continued. “Very good. You know?” I nodded. I wasn’t sure if the shallot was actually making the pain and swelling less, but the attention was soothing my foot anyway.

Nishanta stood up and threw the used piece off to the side. “OK.” He said, smiling. “Good now.”

The next morning my toe was better! Thanks, Nishanta.