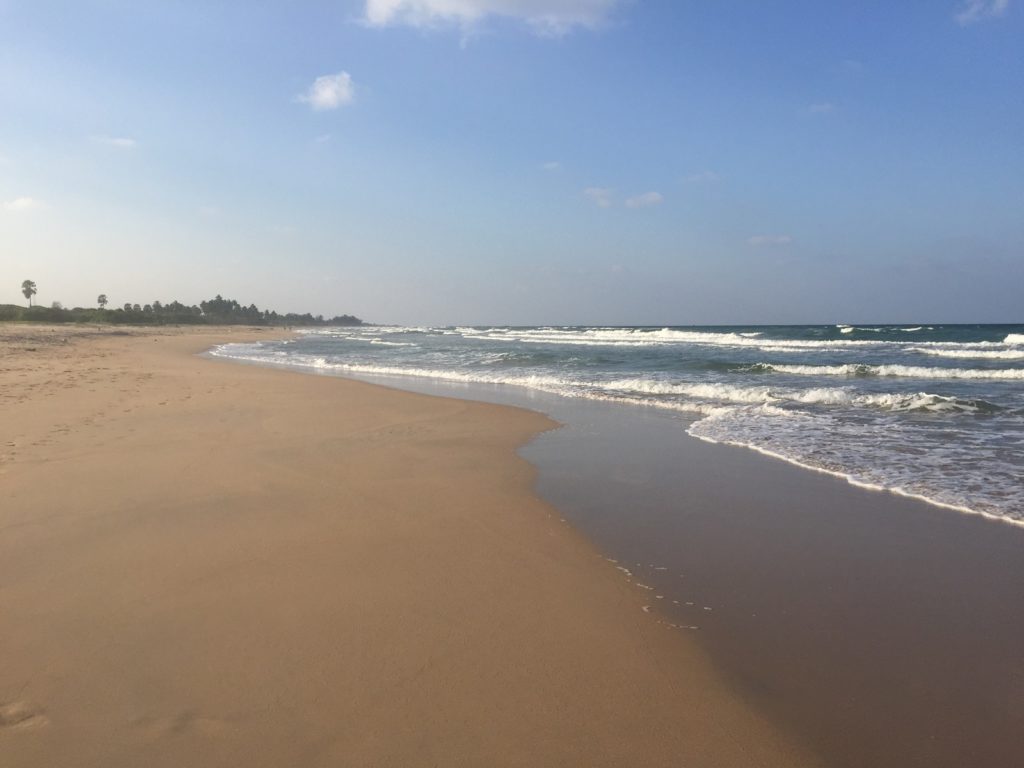 Poor Annie had to go back to New York’s winter and work. I felt bad that she had to leave because a week in this country is just not enough. Saying our goodbyes in the crap-tastic home stay we were staying in was sad, but we had a bus to catch.

Our next destination? Nilaveli Beach via Trincomalee. The guidebooks have described the north and east as quieter, less-developed and fewer tourists: they were right. Our bus ride was about 2.5 hours from Anuradhapura. The land was green, lush rolling hills and then: the bay and the ocean.

The people in Sri Lanka are incredibly helpful, not only to each other but to foreigners as well. On the bus we watched as a passenger handed the ticket man a 5,000LKR note and disappear; the ticket man pulled the bus over an hour later so he could give another guy down the road the note. What? That’s a lot of money! There’s a lot of trust there and this seemingly small act struck me as a common occurrence. We’ve seen these buses deliver medical equipment, letters, boxes and food. And the people on the bus are always giving up their seats to the elderly or the small. So nice!

Trinco (as it is commonly called) is a bustling coastal city. The minute the bus pulled into town we knew we were there because of the smell of fish. Traffic zoomed back and forth and we stumbled off the bus and, after asking around, found our bus to Nilaveli beach.

The 2nd bus was PACKED with people by the time we pulled out of the bus depot. I’ve never seen so many people on a bus before. It was epic. Dudes were hanging onto the handrails and stairs outside the bus in order to get a ride. Apparently this bus runs up and down the coast and acts as mail carrier/school-bus/public transportation all at once. When we got off we were more than happy to find our accommodation.

After the Tsunami in 2004, the eastern coast of Sri Lanka was devastated. About 30,000 people died and the communities that existed were literally wiped off the map. Places like the Nagena Hira are very new and are popping up here and there. Jackson and I supposed that in the next 5 years the beach will be unrecognizable. As it is now: it’s amazing. Sleepy beach towns, a few hotels and a whole lot of locals make coming to this part of the country a real treat. Other than the few people we were sharing our hotel with, we saw only a small handful of other tourists.

We had booked 2 nights at Nagena Hira, but we liked so much we decided to stay another night. We were a bit stupid in that we hadn’t gotten out more cash before going to the hotel, so we had to hoof it back to Trinco (a half hour away by bus) to get out more money from an ATM. Because this area is so underdeveloped, there are literally no ATMs for miles: be prepared.

The beach was beautiful. We were staying just opposite Pigeon Island, so we got to see some small boats going to and from. A couple at the hotel told us it wasn’t really worth going to see. Apparently there was snorkeling and diving to see coral, but the place is overrun with locals and it’s hard to see anything. Plus, it’s expensive getting out there. Pass.

The only problem I had with the beach was the lack of cleanup. The ocean spat a whole lot of garbage onto the soft golden sand and it was really sad to see the beach littered with fishing nets, plastic bottles and plastic bags. It hurt my heart a lot. We have so much to do to make this planet a better place.

As for nightlife and food outside of our hotel: from what we saw it was almost non-existent. We went for a walk around the area after getting back from Trinco on our ATM run and there was only 2 places we could go for lunch and both were some Mama’s kitchen where she’d slapped a sign to advertising food. We went into “Home Food Center Nilaveli” and were the only people there. The fried rice was good.

The stay was bliss, otherwise. Perfect weather, ok WiFi (this whole country has crap WiFi, by the way), lots of stars and beautiful sunsets. I highly recommend Nagena Hira, it’s $40-50USD a night, which is very expensive for this part of the country, but we splurged and we’re not sorry. Some other accommodation looked a lot cheaper and probably gives you what you pay for….