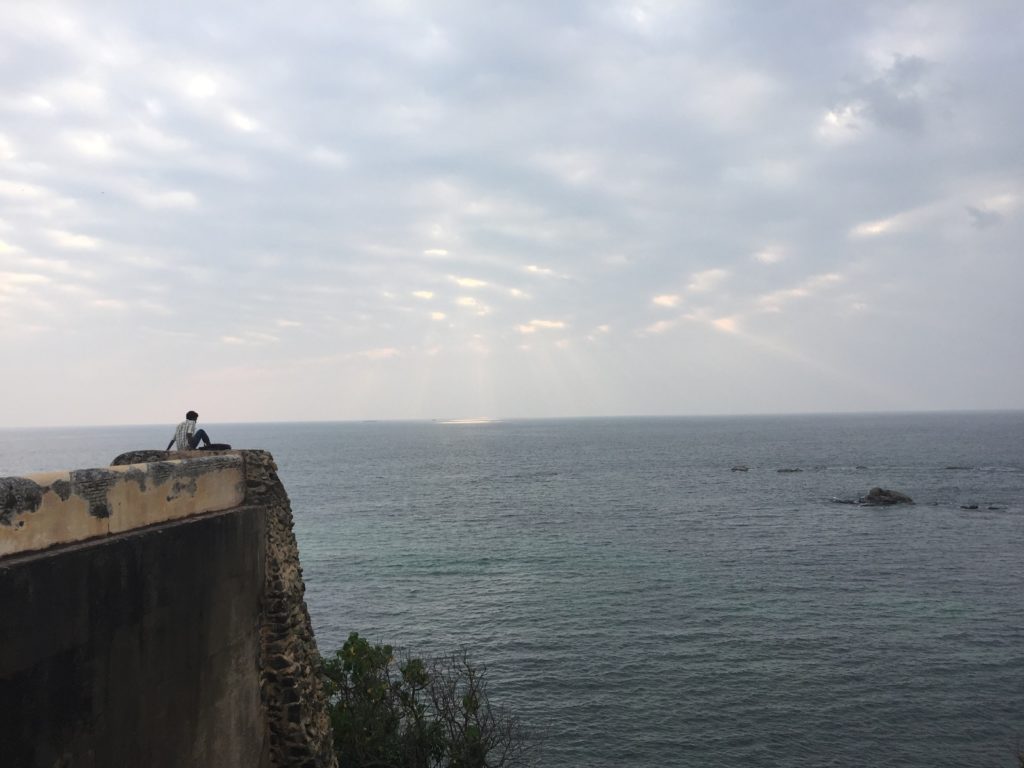 Dilemma! Do we head to Mirissa beach or just go to Galle? We’d heard that Galle was a great place to see and that we shouldn’t miss it. Our time in Sri Lanka was running short at this point and we needed to make some tough decisions: to beach or not to beach?

We opted to not beach and went to Galle. How could we top Nilaveli?

A few hot and sweaty hours later on the bus we arrived. By this point I was getting well and truly sick of the buses. My back and butt were constantly covered in sweat and the pollution blasting in with the air that comes through the open windows was getting old. I was tired of cleaning my face and wiping black snot out of my nose. (But, also, you CANNOT beat the price of the fares, it’s so damn cheap).

We stayed at Ging View homestay which was 2km outside Galle center. It was quiet and a really comfy stay. The host was SO NICE. He told us that he’d worked in South Korea for 7 years and saved up all his money so he could open the homestay and live comfortably in Galle with his family. He explained that he wanted to send his sister to college and pay for her exams so she could learn Japanese. “Japanese people can not speak good English.” He explained. “They have difficult time speaking in Sri Lanka and my sister will help them when they come.” Since he already spoke fluent Korean he could help one group of people out, why not another?

The dinners his sister cooked for us were the best food we had outside of Anuradhapura. The curries and the daals were fantastic!! Seriously, the best food we’ve had has all come from homestays. Also, the dinners came to 900LKR ($6USD) which was half of what they were charging in Galle’s center.

Galle itself is a strange contrast of old and new. The “real” Galle, or the Galle that’s currently in use, is very much like any other Sri Lankan city: busy, congested, chaotic. The older part of Galle, the Fort part, was a completely different story.

The Fort, built in the 1580s, was originally intended as a way to defend the Portuguese colony that had been established around 1505. The Dutch then took over, after kicking the Portuguese out, and built a bunch of churches and fortified The Fort some more. The Fort was captured by the British (with no fighting) in 1796 and was then used as an administrative base. Now it’s a crumbling ruin of epic proportions and a UNESCO site.

It’s free to walk along the walls of The Fort and I highly suggest you do. The views of the ocean are gorgeous and to clamber all over something so massive is fun! Just, careful you don’t fall into the many holes and crevasses that pock-mark the structure. I got so freaked out that I was going to break my leg that I got down off The Fort and stuck the smaller roads. It’s strange: on the walls, the paths run here and there, with no real purpose. Some paths end abruptly at sharp drops and some end at staircases leading to the street. Many times we’d be wandering and find ourselves at a bit of a dead end and would need to slide down the side of a wall to continue. Is this safe? Absolutely not. Does anyone seem to care? Nope.

Inside The Fort are old streets lined with Dutch and British-influenced buildings. It’s a lot like walking around a Caribbean port city, as Jackson pointed out. He’s so right. A little while back, Jackson and I went to Key West to take a gander at what was going on down there. When we arrived we were confronted with tourists and drunks everywhere. It was disheartening and really annoying. The architecture was drowned out by neon signs and techno music. There were no picturesque beaches or quiet places to stroll down a street at your leisure or sit in the shade of a palm tree and breathe in the sea air. Fast forward to Galle: and it felt like everything Key West should have been but wasn’t. Small shops, boutique stores, expensive restaurants, holes-in-the-wall and bars can be found everywhere. We were able to sample a delicious cocktail at The Galle Fort Hotel (originally a Dutch mansion) before strolling along the side streets to duck into old churches and marvel and quaint buildings and ancient looking trees. Galle is beautiful. Really worth the trip.

We stayed in the port city for 24 hours. Then, we needed to make our way up to Negombo to catch our flight. We caught a train (2nd class) from Galle station to take us up to Colombo. The 10:55am train was PACKED with tourists and locals alike (and it was a Monday). We didn’t get a seat until 1.5hours in (the trip is 2.5hours total). It was nice to have a break from taking the bus, but the train wasn’t that much better. Had we scored a 1st class seat maybe it would have been more enjoyable? I did like being able to stand at the open doorway and watch the world go by. In The States you’d never be allowed to do that.

You’re supposed to arrive at the airport at least 5 hours before your departure time. DO IT. The lines are insane. Also, you never know with the traffic in Colombo. We hopping in an Uber which was really expensive for Sri Lankan standards (you can take a bus to the airport for 120LKR- a little less than $1USD) but we were sick of buses and wanted to get to our flight in comfort.

Sri Lanka was a country of surprises, beautiful people, places and unbelievably delicious food. It was really cheap overall. It was easy to travel around. The sites are really worth a visit and, I think, as long as you stay away from the crowded cities and tourist hubs you’ll find a land full of originality, optimism and solitude. What a beautiful country. We’ll miss it.