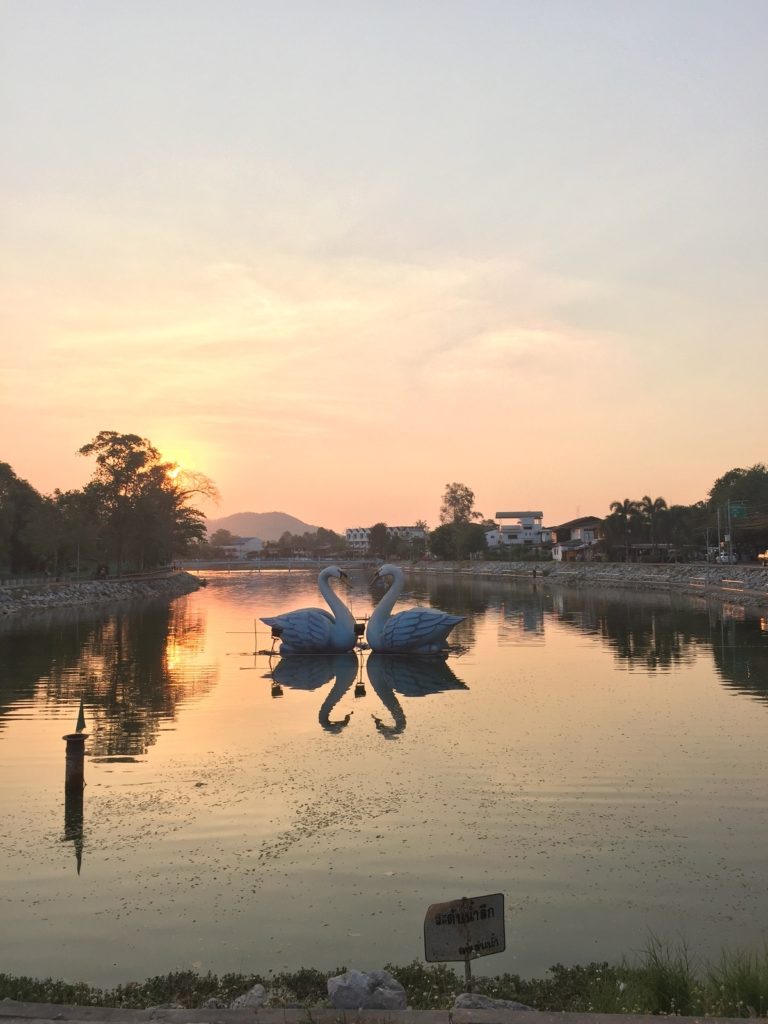 The cabby was confused. “Pai! You want go Pai!?”

The cab driver was silent again. “Loei?” He repeated to himself.

Jackson offered the name of the park we wanted to go to: “Phu Kradueng?” The cab driver seemed to get it then. “Ahh, okayyy.”

He dropped us off at the bus station and pointed to a small table in the middle of the waiting area with a bored looking chick on her phone. “Buy ticket there.”

The bus trip from Chiang Mai to Loei city was long! It took about 10 hours and left Chiang Mai at 9:30am. The tickets came to about 400bhat each (about $12USD). We scored a seat in the front and were able to look out the window of the double-decker bus as it pulled away from Chiang Mai: byeeee!

The drive was quite lovely, weaving in and out of the mountains and hills of The North. The thing that was totally unexpected was how many security check-points there were! It felt like the bus we were on was constantly getting stopped and checked. Jackson and I had to pull our passports out quite a few times. I was a little nervous because I had cut my hair and wondered if the officers would give me a hard time about how different I looked from my passport photo (they didn’t).

At one point a Japanese man got on next to us and muttered to himself in Japanese for quite a while. We wondered where he was going. Hell, I’ll bet a lot of locals were wondering where the hell we were going. Jackson and I were the only two Westerners on the bus going to a very quiet part of Thailand.

We pulled into Loei around 7:30pm and got a ride to our accommodation from Beer, the guest house’s owner’s cousin (yeah: her name was Beer!). The “Stay Guest House” was a 10-minute ride from the center of town. We had originally planned to stay one night and then shove off to get to the National Park the next day, but found Loei so charming we stayed longer.

Loei region is full of things to do. Beer offered to drive us around to look at caves and go hiking for a mere $70USD the next day (uh… no). Instead, we decided to take it easy and go check out Ang Kep Nam Man Ton Bon Reservoir. Apparently, there were bamboo rafts you could rent to go out on the water and relax. Sounded good to us! It took 30 minutes to drive from town. We had to hire Beer to take us. The problem with Loei province is that it is quite large and hard to get around unless you have rented a vehicle. Even a motorcycle would be a bit tough. You can rent motorbikes quite easily, though, for about 250Bhat a day ($7USD) if you’re willing to ride out to the different locations.

The reservoir was gorgeous! We were the only westerners there and no one spoke English. Beer had to translate for us (thank you, Beer!!). I think Jackson and I could have gotten a smaller raft for about 200bhat, but we got stuck with a larger one for 350bhat ($10USD) oh well.

The raft was taken out by a guy on a motorboat who also took our food orders and later brought our lunch out to us on the water. We agreed to stay out there for 3 hours and felt like that was a good amount of time. We were right, too; after 3 hours the water started to get busier and our views were being blocked. Also, Thais love to play acoustic guitar and the radio which started to impede on our zen as the two sounds began to compete with each other across the water.

That evening we biked around Loei city. It’s not a pretty town, but there was a nice park with a while bunch of ladies doing what looked like a Zumba workout and I found it all hilarious. There are several small night markets as well and Jackson and I enjoyed sampling Northern Thai food which is lighter in flavor than the Southern cuisine. After dinner, we found a brewery called “Outlaw Brewing” and had a cold house ale in what felt like a place right out of Brooklyn. Loei felt really laid back and friendly. We only saw a small handful of Westerners and felt good about our decision to go out that way.