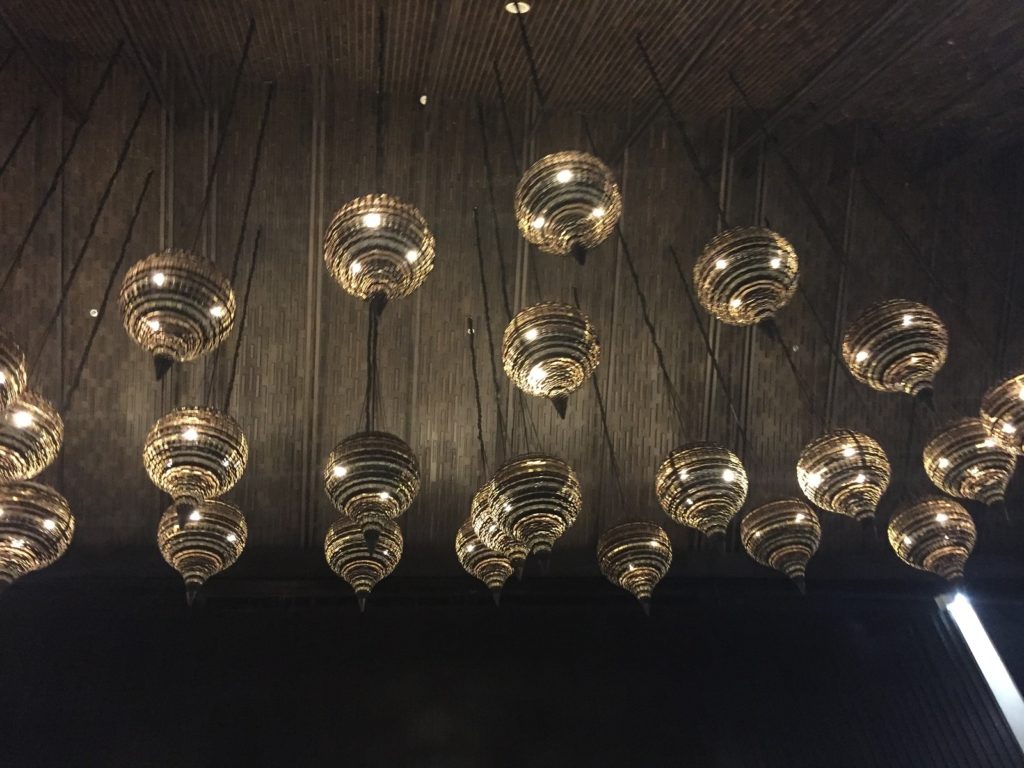 To treat ourselves (and get a much needed good night’s sleep without the added soundtrack of other people’s farts), we checked into one of the ritziest hotels Khon Kaen could provide: the illustrious “Avani Hotel.” For a whopping $40USD/night we were living large on the 11th floor overlooking a huge pool and the rest of Khon Kaen. Oh yeah.

Jackson found a restaurant nearby that boasted incredible Isaan food. Yes! Let’s get some well-made local food! At a restaurant! Civilization!!

We rocked up to this place whose name was in Thai: ร้านอาหาร โอมเพี้ยง (which roughly translates to “Presto Restaurant” in English) and sat down in a cloud of mosquitoes. We tried to look as dignified as we could while smacking bugs out of our faces and hair. The servers set up fans and offered me some bug repellent (Thank you!). We ordered whatever looked good from the photos on the menu. Isaan food! It’ll be different and yummy! The only lady who could speak any English took one look at us and said “No spicy! OK!”

She looked at me like I was an idiot. I slapped at a mosquito.

Several minutes later we were brought two of the blandest meals. I feel like we got the “white people special.” No spice. Lots of dill and mushroom. A big side of disappointment. Everything was very expensive as well. Ew. Why didn’t we just hike around and find a market stall? They’re so much better! Lesson learned.

Khon Kaen itself is not much to see. The city is a large center for business and not much else from what I could gather. We wandered a little and saw little. Not many tourists, though, which was nice. There were a LOT of power lines and traffic.

A word to the wise about the bus station: there’s a small, dinky little station that all the taxi drivers drop you off at and then a van shows up and drives you to another station about 20min outside of town. We were thoroughly confused until we realized what was going on. Also: clouds of mosquitoes everywhere. I shudder to think what the place is like in the wet season…

We caught a really delux bus heading back to Bangkok: huge seats! Nice, but it was a LONG ride. 10 hours. No dinner. Sore muscles. Traffic. A/C blasting. But also no checkpoints!

Getting into our hostel in Bangkok I. Lost. My. Mind.

Here’s the thing about me and some members of my family: if I don’t eat every 3-4 hours, I’m a wreck. I lose concentration, my blood sugar drops, I can’t form sentences correctly and I get really emotional. Combine that with a 10-hour bus ride and all prospects of dinner closed because we pulled in at 10pm? Natalie= hot mess. What really did me in was buying what I thought were mango slices from a 7-Eleven, but really they were pickled mango-flavored sticks. I took one bite and burst into tears. Was nothing sacred? This was a low point of the trip.

I assure you, reader: the next morning, after breakfast, I was a much happier camper. The world wasn’t coming to an end. We even got passport photos: how productive.