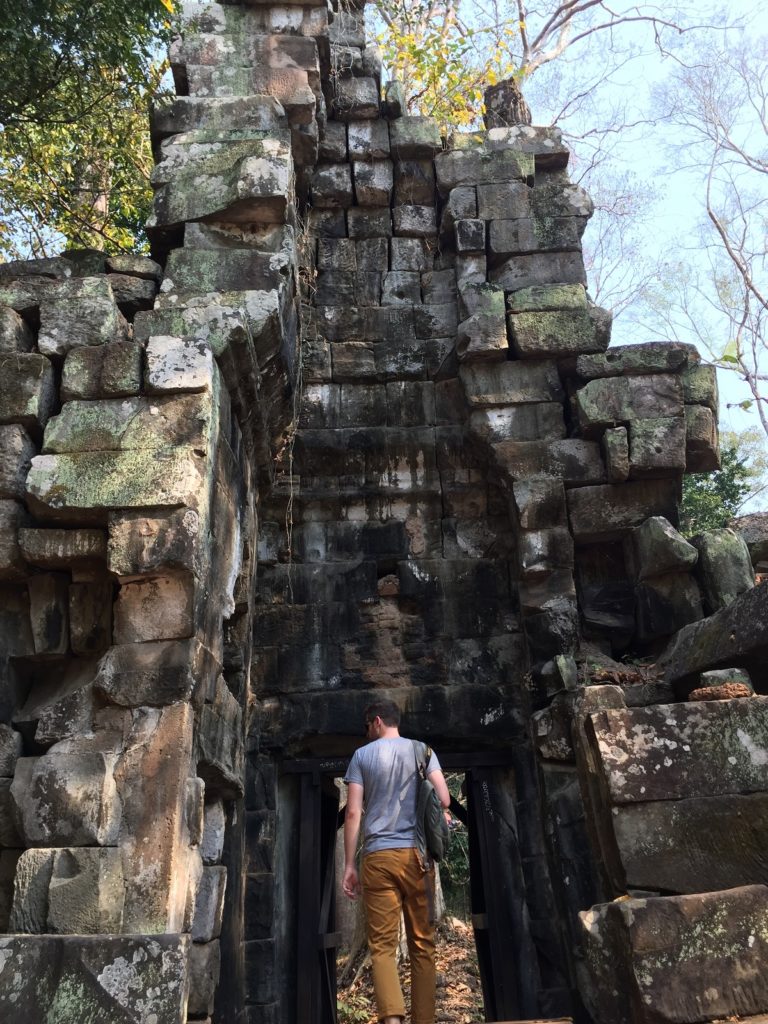 When I first arrived in Siem Reap 5 years ago, it was a smaller town with some paved roads in the center and dusty dirt roads out leading to scattered hotels. There were children begging in the streets and victims of land mines asking for help. I remember being reminded of India’s bone-grinding poverty and wishing myself back in Thailand.

Coming back to Siem Reap I felt as if I had walked into a completely different place. In a conversation with my parents, when I was exclaiming over the change, my Dad pointed out how the last 10 years has seen unprecedented amounts of people lifting themselves out of poverty around the world. “Not all things in the news are bad.” He said, always the optimist. I could see what he meant in this city. Dusty dirt roads no longer! Paved streets, a bustle unlike anything I experienced last time. No begging children, in fact there were signs everywhere asking not to give to children as the government was trying to get the kids into school. There were shops, food stalls, markets, cars, buses, people, people, people everywhere! I felt a hum of excitement there: the locals had confidence.

The real difference between the “touristy” aspect of Siem Reap versus Chiang Mai, Thailand was how I felt welcomed in Siem Reap and more of nuisance in Chiang Mai. Cambodians seemed happy to have their streets thronged with tourists. There seemed like millions of food stalls lining the roads at night and the night market was a glow of activity. What a contrast! As much as I fear globalization will make us all the same, I was happy to see this city thriving as a result of it.

Our hotel was a 25-minute walk from the town center. We booked a sweet deal at a 4-star hotel called “Savada Angkor” which had a pool! We were paying $28USD a night. Super sweet. Jackson and I were joking about the hotels in The States. From our experience, a “cheap” hotel would be about $70USD a night and anything close to what we were getting in Cambodia would run us about $200/night, easily. The States are expensive!!

Siem Reap is not just about temples, there are other things to see, too! Jackson and I went on a tour of a silk factory which was super cool. I had no idea how silk was made and watching the process from start to finish was awesome! I feel as if nothing has not changed in thousands of years. Jackson pointed out that if the power went out the workers would be able to continue without even blinking. If I wasn’t so bad at shopping (I hate it) I would have bought several silk items. But, I didn’t. I’d rather spend money on a bus ticket. Maybe I’m a sucker.

Ok, so the temples: I can’t begin to describe how huge this complex is. Nor can I describe just how jaw-dropping it is to scramble, hike, climb, slide and cling to the ruins. I can’t tell you accurately about the breath-taking feeling you get when walking through time-less ruins and feeling as if time, nature and humanity had all found a way to be melded into several physical monuments in such ferocious harmony and destruction. “Feasting your eyes” is an understatement. I’m posting some pathetic attempts to capture what we saw on camera. You really have to see it to believe it. Jackson’s photo essay on it does a good job.

Tickets to the Angkor Temples got more expensive in the last 5 years. When I went last it was $40USD per person for a 3-day pass. It’s $62USD now. Ouch!

Oh, and if you want to see these temples (which I HIGHLY recommend you do, if you haven’t already) get your ass to the ticketing line before 5am. Seriously. We read in one review that if your sorry butt is not in that line before sunrise you’ll be an “animal in the ticketing-line zoo.” I believe is how the review phrased it. In the couple minutes we were waiting the line had doubled. Bus after bus pulled in to the parking lot: it was 5am!!

Why were we there so early? To see the sunrise. It’s something you have to do to beat the crowds. And the sun. It’s hot. The stones bake and it gets even hotter.

Pro tip: if you want to see Angkor Wat for the sunrise get there at, like, 6:30am and walk around the grounds while all the suckers with selfie sticks try and take stupid photos of the sun in the pond. Then, around 8am when the suckers are swarming the ruins, walk down to the deserted pond and snap a few awesome shots.

Breakfast can be bought inside the ruins for $5USD. Jackson and I ordered some eggs and toast and got a huge helping and found that 5 bucks was not that much more expensive than what we would have paid in Siem Reap.

I’d say the only sad part of this whole experience was how ridiculously crowded the place can get at times, which is really annoying, but I can’t blame anyone for being there. When the tourists were quiet, awed and peaceful it didn’t feel like they were in the way at all. When they were screaming at each other and loudly pronouncing their presence by taking selfies in front of important sites I wanted to smack their stupid faces. You win some, you lose some.

Renting a tuk-tuk is a must. They’ll allow bicycles, but this complex is huge and a tuk-tuk or car makes getting around so much easier and faster. For about $20USD a day you can really see a lot.