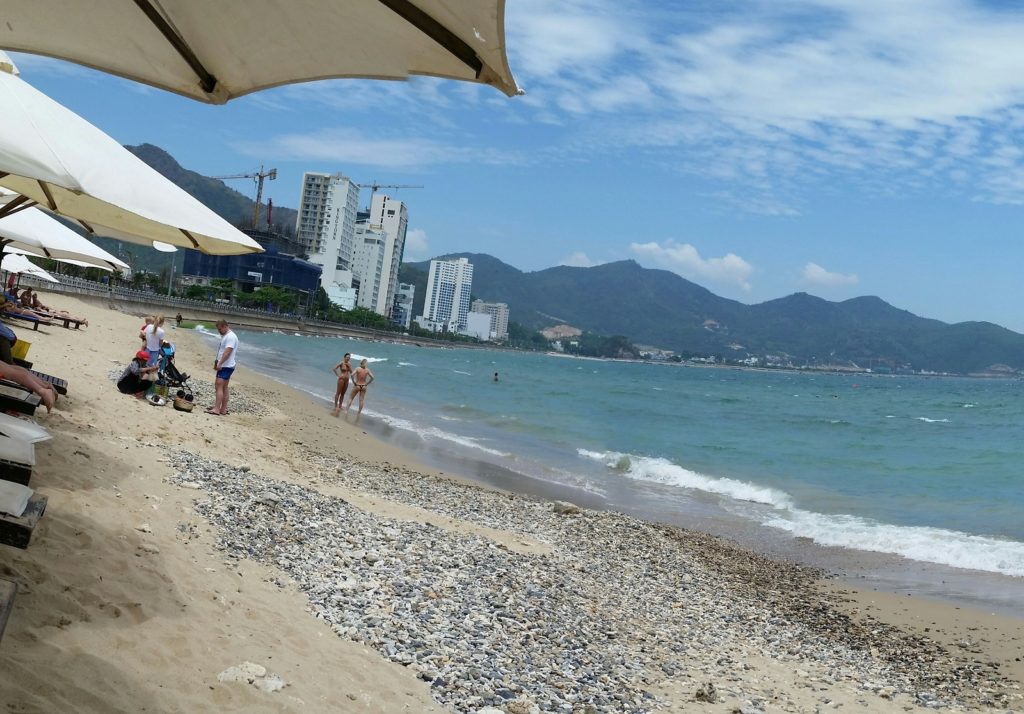 If you can read that you would have done better than we did in Nha Trang, which was FULL of Russian tourists.

Overall, Nha Trang was alright. Compared to the beach in Phu Quoc I’d say it was a little more beautiful because of the mountains ringing the bay. The beach was dirtier, but less crowded. You win some, you lose some. 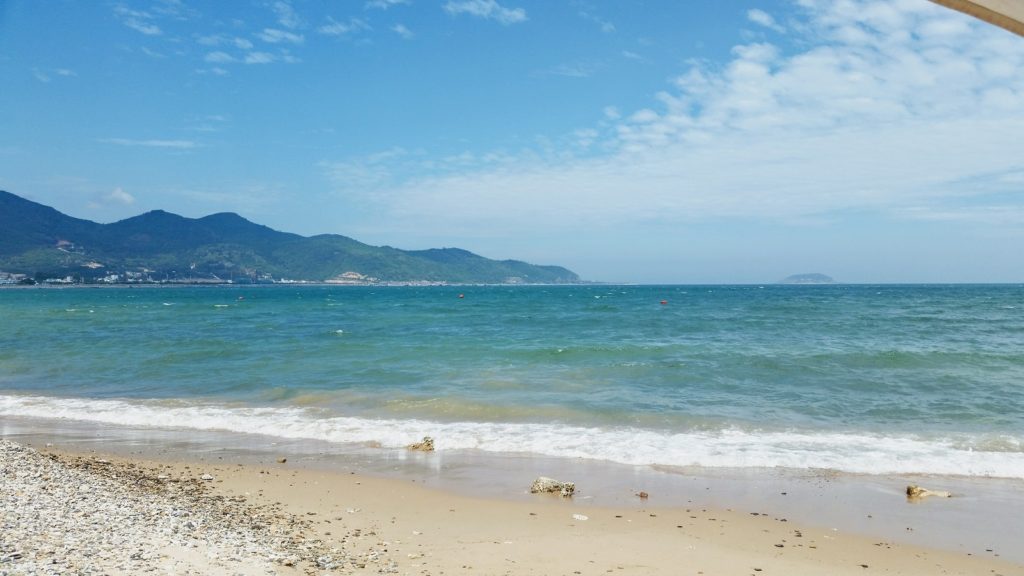 The biggest highlight of Nha Trang was meeting Felix. Felix is a firefighter from Cologne, Germany who was travelling around Vietnam on his own. He’s energetic, inquisitive, has a strong German accent and loved to tell us about his job (I’ve never gotten a chance to talk to a firefighter before: fascinating!). He was staying at the same guest house we had booked. When we first met him he was chatting with a little girl named Linh who was the daughter of the owner of the guesthouse. I knew the minute we started talking with him we’d be good friends.

Inviting Felix along, Jackson and I went to the beach where the 3 of us talked about world events. We compared notes about Vietnam and our travels. Felix seemed disappointed in the beach at Nha Trang. He admitted to searching for the Shangri-La of backpackers: the (almost) untouched beach nestled in a remote and beautiful surrounding. Honestly: as long as we weren’t getting swindled I was enjoying myself. Although, as soon as I thought that a man came up to us and demanded that we pay for our beach chairs (even though we already had). Thanks, Vietnam.

Having met an American couple in Saigon who was in Nha Trang as well, Jackson and I ambled over to the downtown area of Nha Trang, an hour and a half walk from our home stay, one evening.

The traffic in Vietnam is legendary. There are millions of scooters and motorbikes. They drive with a set of rules that make sense only to the locals. What’s truly remarkable about the unbelievable amount of motorbikes is it causes the traffic to become liquid, parting around a group of people crossing the road like a stream around a rock. Cars can be blocky and act like dead wood in a river. To cross the roads in Vietnam is to literally plunge in. There are traffic lights, sometimes, but mostly it’s a matter of walking confidently across the street and making no sudden movements, a little bit like swimming.

The walk to the center of Nha Trang was filled with traffic then punctuated by moments of quiet as we wound our way through the warren of residential streets leading to the beach. We got a lot of stares in Vietnam. I didn’t blame anyone, we do look really different. Also, what are two white people doing in the middle of a residential area? They probably would have asked us in Russian, if they could. Maybe they did? We couldn’t have responded, anyway.

Our American couple suggested a burger joint. Sure. Walking past the barrage of Russian script we came to our destination: “Bogosov Burger and Steaks.” The American couple was from New York City. Hernan was originally Argentinian and Latanya’s family lives in Georgia. They’re an interracial couple who decided to quit their jobs, leave their apartment and dog and travel the world for 9 months. Badass. I knew we’d get on with them when, in Saigon, I leaned over and asked if the pizza they were eating was any good. Hernan shrugged and said “It’s aight.” Good answer. We ordered a large.

Reality Check: interracial couples live a different life than I do. Check your privilege, Natalie. I felt terrible. I apologized. Latanya very warmly accepted and seemed no worse for the wear. “But, is it at times difficult for you two to travel as an interracial couple?” I asked. Hernan explained that in South East Asia all the tourists are so different that the locals would stare no matter what. It was really the worst in places like South America, Europe and The States.

I admitted my ignorance and expressed my frustrations at the world. As a white couple travelling, Jackson and I really have it good. There are a lot of people out there trying to live their lives and society won’t let them do it comfortably. Damn. I’m really really sorry. It’s not fair. Everyone should feel like they belong somewhere without a side of judgement.

Back at the home-stay, Linh and I became fast friends. Her English was good for an 8-year-old and she was eager to ask me a ton of questions and speak. “What’s your favorite color?” “How old are you?” “Do you like ice cream?” I found her extremely charming, especially when she’d comment on how tall I was. I’d put my elbow on her head and say “I’m not tall! You’re just short!” She even taught me how to count to ten in Vietnamese which I promptly forgot.

Saying goodbye to our hosts (and heaving a huge sigh of relief because we didn’t have to sleep on the HARDEST bed I have ever slept on) Jackson and I caught a bus to Dalat.