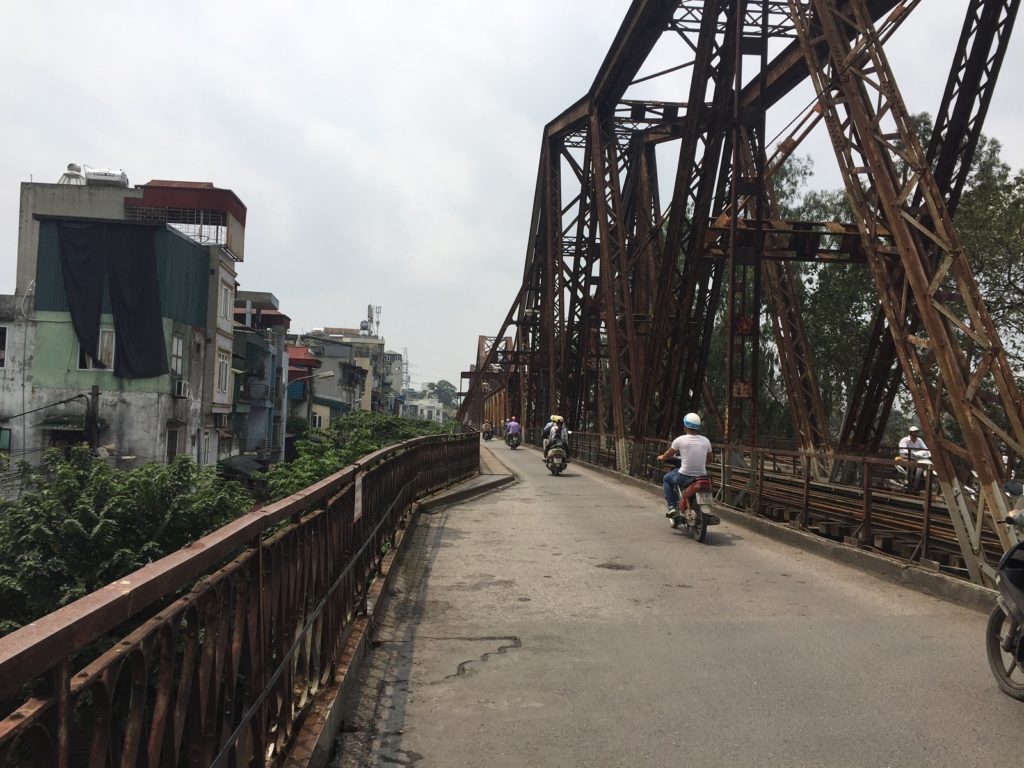 We hopped a flight to Hanoi from Dalat. The national flights in Vietnam were quite reasonably priced we found them a whole lot more comfortable than the buses we took (the bus we took from Nha Trang to Dalat was a sleeper bus and the seats were so tiny it was hard to sit comfortably let alone lie down!!).

The northern city of Hanoi greeted us with a much more relaxed vibe than its southern sister, Ho Chi Minh City. I was immediately impressed by the smaller roads and alleys of the old city, the stalls and districts that dotted the streets lined with large trees. We could really see the French influence here as well. Like Dalat, this city had a certain European flavor to the architecture while still remaining distinctly Vietnamese. 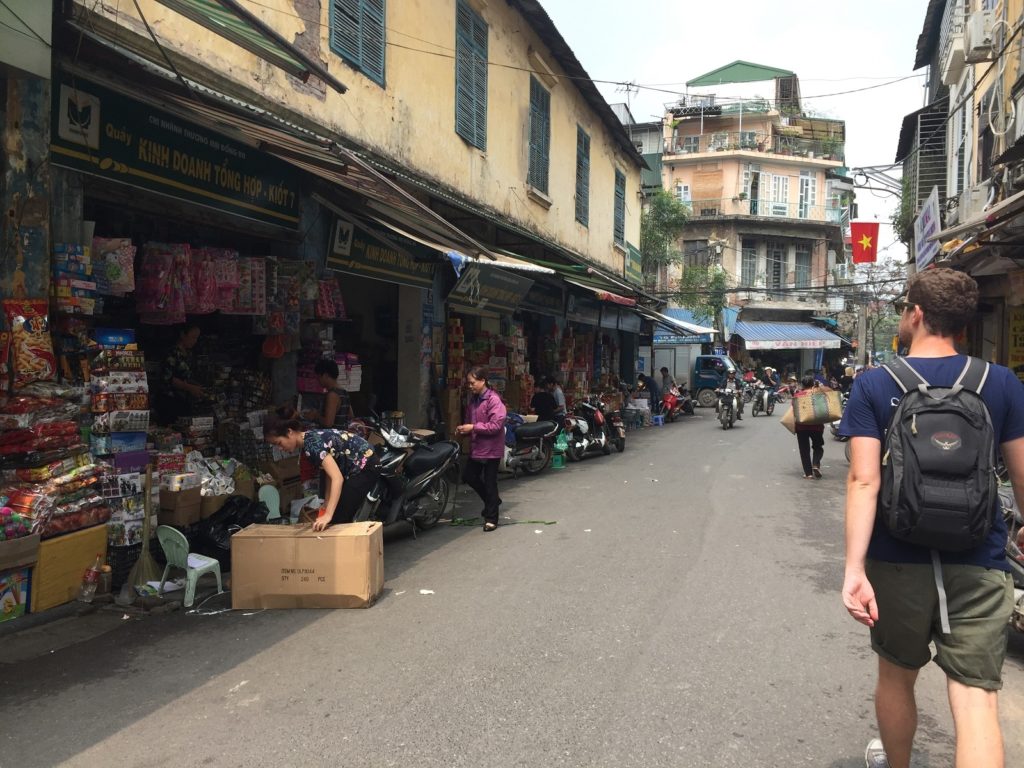 We checked into our accommodation: “The Hanoi Culture Hotel” which put us on the 5th floor of a building with no elevator. Got our legs moving!

We budgeted one day for Hanoi. We were ready to leave Vietnam and figured 24 hours would be enough to get the basic flavor of the city before we shoved off.

Our day was nice! We saw Den Ngoc Son Temple in the middle of a lake (again: floating dead fish like in Dalat; what’s up with that?). 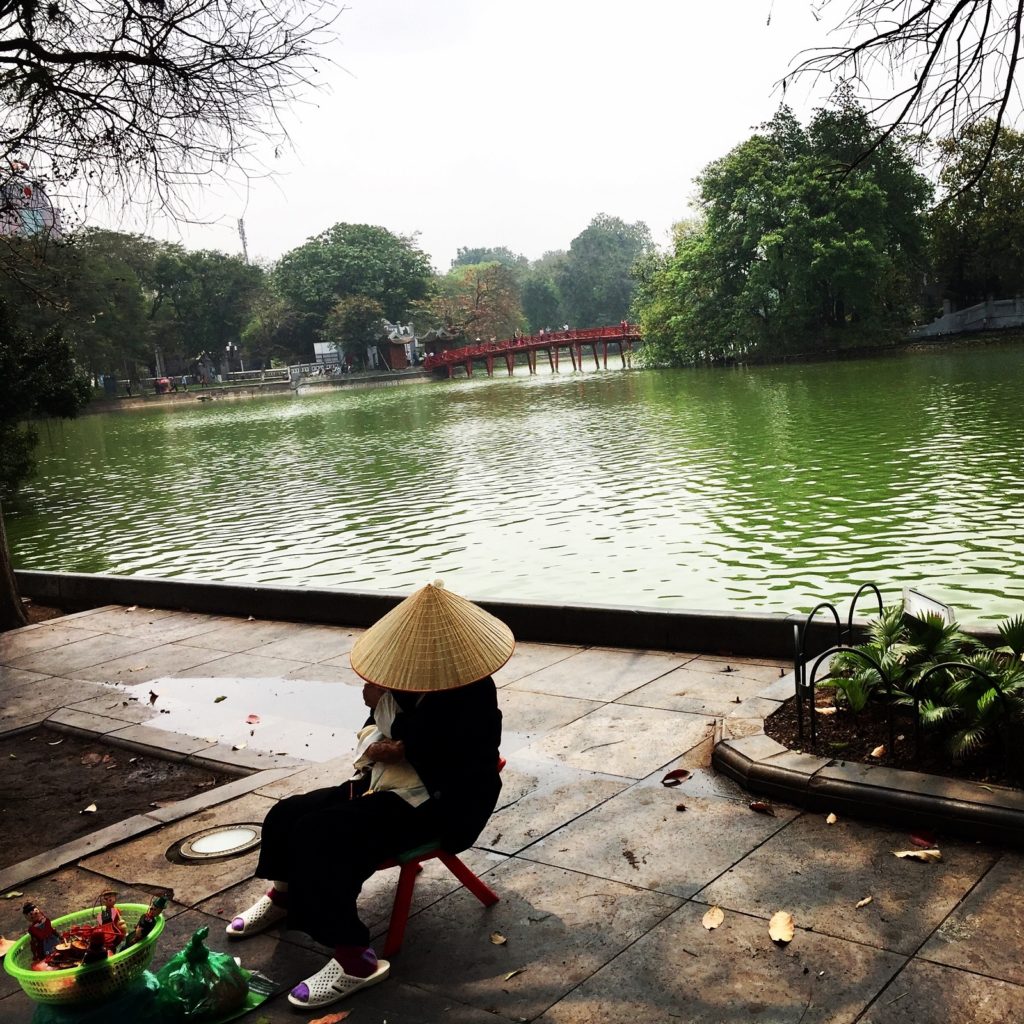 Winding our way through the city we ambled over to Cau Long Bien bridge and walked across, marveling at the farms in the middle of the Red River and seeming to come out of nowhere in the metropolis which abruptly ended on one side and started again on the other. There were banana trees and patches of farms for what looked like miles. Walking along the bridge was hair-raising as the pathway skirts the edge of the road and at some points the enforced concrete had crumbled away leaving gaping holes you could look through and see the river many many feet below… Yikes! I would not have gone out there had Jackson not egged me on. I’m glad I did. The views were worth it.

We set off to check out Ba Dinh Square and Ho Chi Minh’s tomb. It was nice to be somewhere with a lot of space to walk at our leisure, a nice breeze and a clear shot at the blue sky. 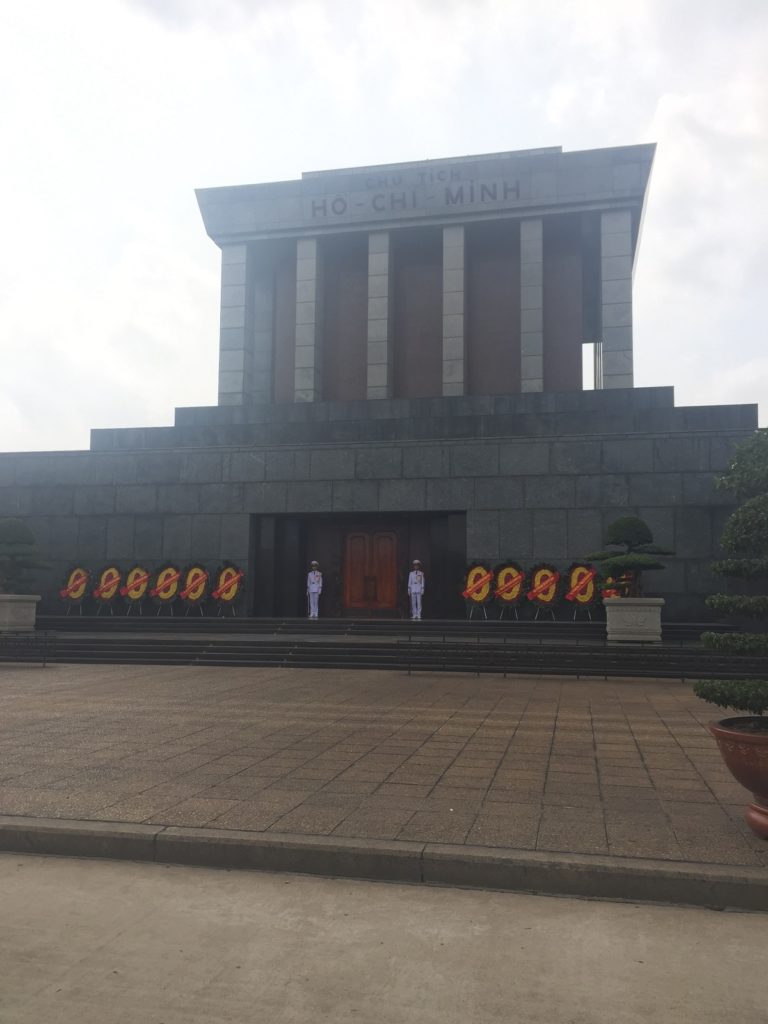 The meals we ate in Hanoi were strange. Walking into one place because it looked promising, we ordered chicken legs only to have a whole bunch of fried chicken feet show up. I’d had chicken feet once before at a Chinese restaurant in New York and thought it was a bit like eating a hand. This was no different except the deep-fry gave the claw a much crunchier bite. Unsure of how to eat the things (or really what to eat on them) I watched as a mother and daughter chewed on theirs. The mother would pick up a claw, delicately bite off the nails on the end of the claws and then chew away at the joints. It was super weird, but yummy. I was almost tempted to order another plate by the time we finished.

Overall, we liked Hanoi. The pace felt a little slower than the other places we’d visited in Vietnam. There felt like more to see as we walked: cracks and crevasses, people, bubbling liquids, and tons of shopping areas. I particularly liked the food market we walked past. It felt cleaner than the markets we’d seen elsewhere: not as many flies. Observing how people display food in other countries is fascinating to me. For instance: I think The States is in a small minority of countries who actually refrigerate our eggs. Meat is also something that will sit out in the open for hours without refrigeration. Vegetables are wonky, irregular and taste MUCH better than in the USA. There is no such thing as “organic” or “locally grown” in many parts of the world because it is obvious that these things are all of the above.

I’ll miss how unapologetic the food markets are. I like that what you see is pretty much what you get.

We had an early morning flight to Hong Kong and I couldn’t wait to get my mouth around some dumplings.