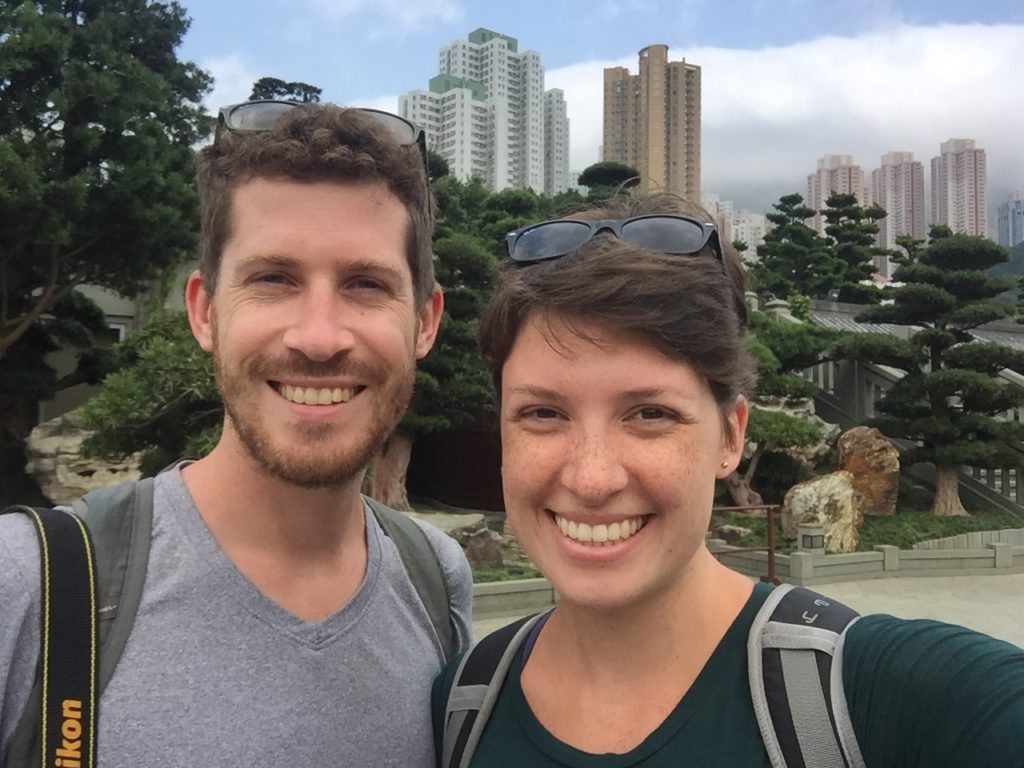 Hong Kong has always been portrayed in my subconscious as this ethereal place full of opium, red lights and dumplings; it was the port that pirates used alongside British businessmen; it is a Chinese-but-not-main-land-Chinese city; it’s British, but it’s not. I didn’t know when I would ever visit, but I knew I would eventually. How could I miss it? I love dumplings and cities!

A big shock in coming to Hong Kong was how chilly the air felt to us. Having spent the last few months in hot temperatures, we were not ready for the cooler air! Out came the “winter” clothes we’d been hording for weeks. My jeans were loose when I put them on. Yay for losing weight on the road!

Taking the bus in from the airport, I had no idea how large Hong Kong was! I just imagined it as a small island off the coast of mainland china, but this was way beyond what I expected! Huge green mountains towered above condos and skyscrapers. The contrast was amazing! The turquoise water and ships zipping in and out of the waterways was beautiful! Our friend Andy later told us that only about 20% of the landmass in Hong Kong is used for the city and the rest is park or protected areas. I believe it!

Jackson had found us a cheap room at the “Peace” guesthouse located inside the Chungking Mansions Building. This building was straight out of New York City circa 1988. We took the airport bus into town (the A21 bus: about $33HKD or roughly $5USD per person). As we drove along Nathan Road there were tons of high-end shops: Chanel, Gucci, Prada, etc… and then: Chungking Mansions building. You could find this building immediately because it is swarming with Indian men trying to sell passer-bys tailored suits. Walking in, you step inside a seedy mall filled with cheap electronic shops, Indian Food, money exchanges and retail shops that advertise clothing which make you look like a rap star.

Walking all the way to the back, we had to take a tiny elevator up to the 7th floor… no, the 5th floor only to get to our room on the 13th floor. There was a hairy moment when the guy checking us in didn’t see our reservation and demanded that we call Expedia to figure it out. Uh… what? Someone has our money and we have no cellphone service and why the fuck don’t you have this figured out because we booked two days ago? He got really mean when we pointed this out to him. We had to wait in a tiny hallway for his buddy to look through the emails again (after repeatedly saying that we hadn’t booked something there) only to get back 10 min later explaining he hadn’t scrolled down far enough on the computer to see our reservation from Expedia. Thanks, bud.

The room was the extremely small and very claustrophobic. There was a little window that looked out onto an airshaft, but no daylight. The bed barely fit, let alone our bags! I tried not to think about what would happen should the building have a fire. The price was good though, $35USD a night and we were in prime Tsim Sha Tsui (called TST by expats) area. Right in the middle of downtown HK.

My sister Caitlin recommended we check out the Temple of 10,000 Buddhas as well as the Chin Lin nunnery. On our first full day in Hong Kong we set out to find these attractions.

The Temple was a really amazing stop! It’s up a small mountain that has a beautiful view of some condos and green slopes in the distance. There is quite a climb to the temple, it took us about 20min to get to the top but as you go up the path is ringed with hundreds of the strangest golden Buddhas. All of them are posed differently and all of them have a character that is unique. Some ride animals. Some try to kills animals. Some look like they were cast in mid-sentence and some look like they’ve never said a word. I liked imagining them all coming alive at night and talking to each other about the pilgrims and tourists they saw throughout the day.

The temple itself lived up to its name. In a room we were not allowed to take pictures of, there were thousands and thousands of tiny Buddhas lining the walls. They all looked somewhat similar and had Chinese written underneath so we had no idea what they must have stood for. I found it disappointing I couldn’t take a photo of what we saw, but a picture would not do this room justice. Plus, there were so many other Buddhas and female deities lining the place that it hardly crossed my mind as an inconvenience.

The Nunnery was a relatively quick subway ride away and this place was a completely different experience. We walked into the traditional Chinese gardens that a next to the Chin Lin Nunnery first and found the place stunning. Everything was clean, in its right place and the views around it were lovely. We ambled around the paths taking pictures and ducking inside the buildings along the way that boasted miniature wooden replicas or cool-looking rocks. I was fascinated by the Chinese calligraphy and later in the evening started practicing writing what we’d seen earlier in my diary. It’s a lot of fun copying the characters. I don’t know what the meaning of each one was, and the translations were stupid, but they’re so different from anything I see on a daily basis back home!

The Nunnery was a lovely traditional Chinese building housing these HUGE golden statues of Buddha and his disciples. The place was not too crowded and it was free to go. I liked breathing the heady incense that accompanies some Buddhist temples as we walked over to view the statues.

I was feeling rather sleepy at this point and glanced over to one of the guards who was in charge of making sure no tourists were touching the statues and she was nodding off something fierce. I would hate to do that job. It was warm, there was the sounds of monks chanting over the loudspeakers, the incense was strong and it was quiet and dark: recipe for disaster. How does anyone ever stay awake?

For dinner, we went to a famous Michelin-star-rated dim-sum restaurant called “Tim Ho Wan.” Worth a stop. It was quite yummy and cheap: about $20USD for the two of us to eat.