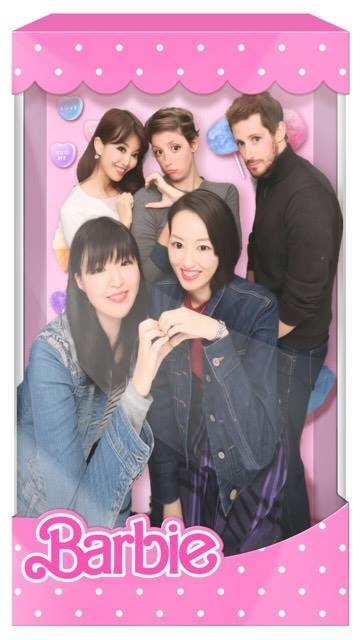 I booked us into the APA Hotel, a pricey venture but necessary as everything else seemed to be sold out. The hotel was right in the middle of Shinjuku: a crazy, crowded area of Tokyo known for its red light district, gambling rooms and food. As we walked to our hotel we were blasted with neon lights, loud techno-game music and large guys trying to get us into their clubs to see a show.

The incredible part was checking in and going up to our room: all was completely quiet! I expected some ambient noise from downstairs and heard none. Well done!

I arranged to meet with some students I had taught in New York about a year ago. Ayaka and Aya were at OHC (Oxford House College) at the same time and at various points of their studying I had taught them. Ayaka had announced she’d gotten married and moved to Melbourne, Austalia but was in town at the same time I was (sweet). Aya lives in Chiba, which is outside of Tokyo, but kindly took the day off work so she could meet us (total sweetheart).

Hanging out with Aya and Ayaka was our first experience of spending time with locals for longer than a meal. We got taken all over town. The girls looked up the best places to view cherry blossoms and off we went. At the time, the blossoms were only a few days away from full bloom, but despite the not-one-hundred-percent bloomage, they were beautiful. Tokyo was alive with flowers and color. I enjoyed walking along the river and small parks to see people enjoying Hanami, (which literally translates to “cherry blossom viewing) a practice that is done quite a lot by the Japanese. They’ll get a bunch of friends and family together, buy some plates of food and a couple of bottles of sake and sit under the branches of the flower covered trees. I was impressed by how organized and clean it all looked. There was no garbage in the parks, and the clusters of people stuck to themselves keeping all of their stuff on tarps and blankets. They weren’t even very loud- in the States I’d expect to see some groups with boomboxes or portable speakers playing songs. There was nothing like that in Tokyo from what we saw.

For lunch we went for sushi and got to eat off our first Tokyo sushi train. I found it bizarre that the pieces of sashimi and sushi were delicately put together, then placed on a conveyor belt for the hungry customers to feast on at their leisure. I’d seen this in New York once, but thought of it as an American bastardization of sushi serving. I was wrong. I think it’s everywhere. The sashimi was good and it was nice to have our guides order everything in Japanese for us.

Another student of mine, Ayami, who had finished studying English in New York recently,  joined us as we went to Shibuya, the famous square that is pictured in all the movies about and based on Tokyo. We were taken to a coffee shop just above the square and sipped on coffee and chatted about our lives as the people below crossed the largest crosswalk I have ever seen (seriously, it’s a monster and for good reason: there are millions of people crossing the street!).

Jackson and I got our first dose of “purkikura” which is a place for adolescent teenagers to go to take photo booth picture taking to the next level of ridiculous. We had no idea what we were about to do, but, giggling, my three students assured us that it was very Japanese and very stupid and fun. They were totally right! I loved the pictures we took! In a small booth we were told to pose like Barbies and then a program on the computer would airbrush our faces, enlarge our eyes and heighten colors. We looked like anime versions of ourselves. I think Jackson won best transformation, being the only male in the group.

Expressing that I’d like to buy some Japanese stationary at some point, my students made it their priority to find a stationary store. Some people drool over cars. Some people lose their minds over book stores. Me? Give me a stationary store and I. Can’t. Even. A Japanese stationary store!? These, my friends, are the places of legend. The Japanese take pens, pencils and paper to a whole new level. Take, for example, paper that has been developed to create a digital copy of itself onto your ipad. Or pens that have several types of ink and the ink is completely erasable. Aya and Ayami were picking out all sorts of amazing pens that had different colored ink and pencil lead in it. They knew what to get. I surrendered to their knowledge. I am not worthy.

For dinner we went to an “Izakaya”, a Japanese bar/restaurant. The food is served with copious amounts of alcohol and food comes in tapas style dishes. All the food we had was incredible. Fried chicken (which we had to order two helpings of because we couldn’t stop ourselves), fish, potatoes, salads, noodles, on and on and on. Our gals kept finding new dishes on the menu that made then excitedly chatter in Japanese and then, within a few minutes, the dish would arrive and bring a fresh burst of flavor to our mouths. Everything was very Japanese and different to anything  we’d ever tried before. I loved it. As we gorged ourselves, a large table of business people were getting louder and more drunk by the minute. Ayaka explained that they were welcoming the freshmen members of their team.

Could the day have been better? No. We walked all over Tokyo. Going through parks, subways, streets, famous areas and eating our way through an unbelievable amount of delicious food. Aya, Ayaka and Ayami showed us a wonderful time and Jackson and I were so happy to have had them as guides.

The rest of our visit in Tokyo consisted of avoiding the crowds and seeing more cherry blossoms. We stayed in the city for 3 days. I met another student, Ayaka, for Ramen and we chatted about our lives. I enjoyed hearing about her travels and woes about starting a new job. The Japanese work really really hard. It was explained that working long hours is seen as noble and proves to your boss that you are serious about your work. It sounds exploitative to me.

I really loved the gardens and castles of Tokyo. It felt good to get away from the metropolis and sit in a field of grass for a while looking at the blue sky. We had great weather while we were in town.

I don’t think of Tokyo as anywhere I’d want to live. It had a crazy vibe at times and the subway system was incredibly confusing. After meeting a college friend (Jennifer), who is currently teaching English in Tokyo, for lunch and talking over what it would be like to teach English in Japan I felt a bit turned off. Jen explained that there are long hours and lots of work to do for not great money. I don’t mind working hard, but I don’t like long hours. Also, even though it was Tokyo, I did feel very different from the locals. I don’t speak Japanese, I don’t look like them and I come from a completely different culture. It’s hard to blend in in Tokyo. I’ll leave it as a destination I would love to visit again, but don’t want to live in.