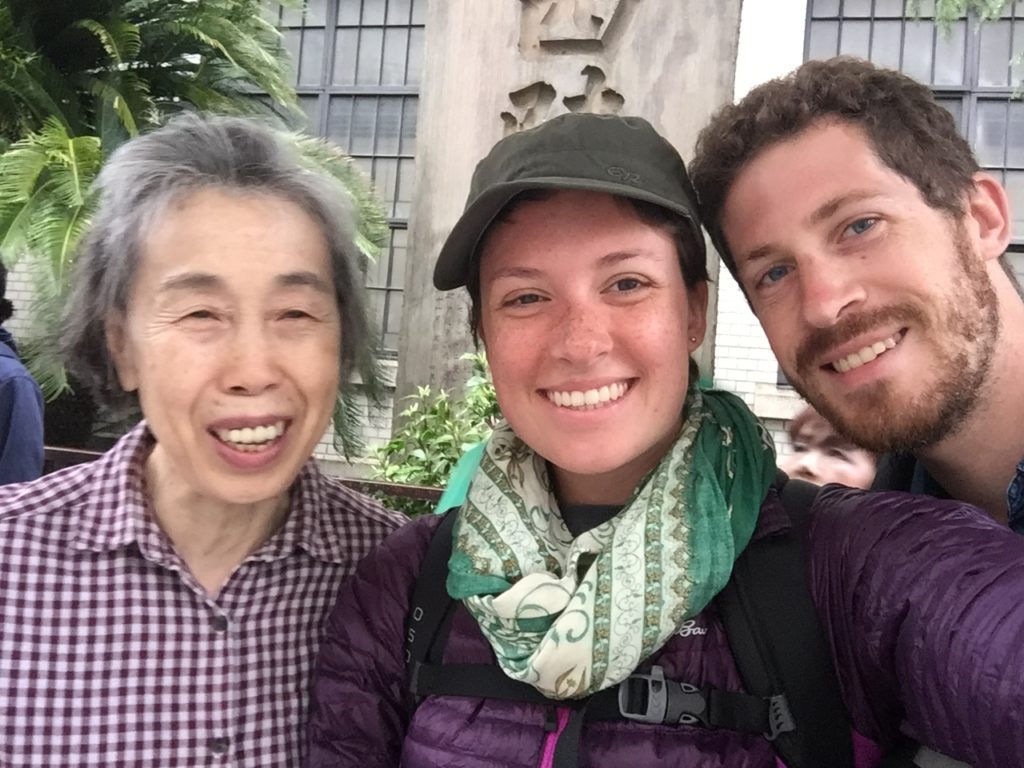 “Shaaaabu shabu… shaaabu shabu!” Hiroko said, carefully turning over the thinly sliced piece of beef in the hot pot. She held up the finished product, dripping with fat and juice, with her delicate chopsticks and pointed to it. “Finished!” She said, laying the steaming meat into a bowl filled with shredded dashi and soy sauce. “Eat!”

This was my first time eating Shabu-Shabu, a meal consisting of hot stock left to boil in the center of the table as diners pick up pieces of meat, vegetables and tofu and boil them. At the end of the meal the stock is then used to cook udon or ramen noodles. It’s a guaranteed way to feel absolutely stuffed full of hot goodness by the end of the night.

Hiroko spared no expense when it came to hosting Jackson and me. Indeed, her hospitality was so above and beyond I felt like I was staying with a grandmother rather than an old student of mine.

Over the course of the few weeks I taught her our conversations would always come back to travel and the places she’d been. The beauty of age is the plethora of experiences one collects and Hiroko had many. It got to a point when I would name a country during class and ask if Hiroko had been there and the answer, almost always, was “yes!”

At one point in New York, Hiroko and another student of mine named Marie came to my apartment for dinner. Hiroko offered to cook for me and I couldn’t pass up the opportunity. She made an amazing meal of tempura fried vegetables and fish! Marie, who became a side-kick of sorts for Hiroko, acted as translator many times and an excellent foil to Hiroko’s traditional grandmotherly ways.

When I sent an email to Hiroko and explained that we’d be visiting Japan she graciously offered her apartment as a place to stay. She also acted as a tour guide and cultural ambassador to Kyoto.

Our first night’s “shabu-shabu” was accompanied with an excellent sake that Hiroko bought after our field trip to “Liquor Mountain.” (LOL) I seem to lose a lot of battles with my students in Japan: very few of them would let me pay for things and Hiroko was no exception.

Over the course of the 3 days we spent in Kyoto Hiroko’s generosity only increased. Jackson and I would wake up in our tatami-mat-covered room to the smells and bustling noises of Hiroko making us a traditional Japanese breakfast.

Casually, I mentioned that I enjoyed rice balls with salmon and, like a genie, Hiroko made us a bento box full of homemade rice balls to take with us on the train as we left Kyoto. Another morning she whipped up homemade mochi (a gelatinous rice pastry sometimes stuffed with red bean paste).

As if the meals she made for us were not enough, Hiroko’s personality was at times impish, witty and wickedly funny. Her English was not very strong, but her sense of humor and care for details was. She’d talk to us in broken English and then unconsciously switch into Japanese nattering away about something and only until she noticed that we were staring at her with glassy eyes would she chuckle and slap her forehead. She still didn’t know what to say so she’d shake her head and wave her hands at us. A good laugh was a great way to end those exchanges.

I was also amazed at her stamina. One day she took us around Kyoto for hours. Marie (the side-kick from New York) came to join us and the four of us walked all over Kyoto.

Hiroko would point to old wooden buildings down side streets and explain that that was a kimono shop or a fabric making shop or a place to dye materials, etc, etc. Jackson and I would ogle at the temples, some hundreds and hundreds of years old and then Hiroko would lead us to the alter and patiently half explain half gesture the rituals of making a prayer. The practice involved a lot of bowing, clapping and bell ringing. You’re also supposed to chuck a coin into a prayer box. I pulled out a 50-yen (about 50 cents USD) coin at one point to throw in and Hiroko quickly stopped me. “No No! Too much!” She pulled out a 5-yen coin. “This is better (and cheaper)” she explained with a twinkle in her eye. In Japanese “5 Yen” translates to go en which is a homophone to go being a respectful prefix for something or someone en meaning “relationship” or “connection”. Therefore, when visiting a Shinto shrine, the Japanese will toss in a 5-yen coin for a “respectful connection” with the deity.

I felt pampered, fat and happy staying with Hiroko. Her meals were full of chatter about our days and the sake poured freely.

I was sorry to leave and say goodbye. We told her that she was welcome to visit us in New York the next time she came. Jackson promised to cook for her. I’m looking forward to pulling out the stops for her.