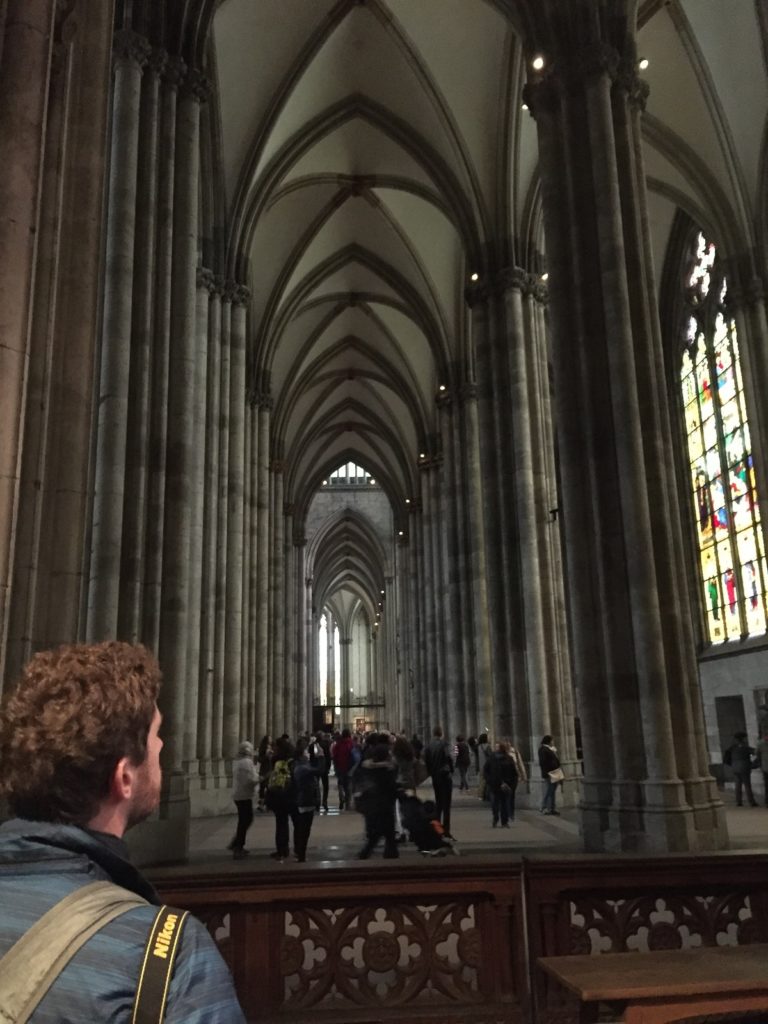 A while ago Anthony Bourdain’s show “Parts: Unknown” did an episode based in Cologne, Germany. I remember watching this episode from our living room and Jackson and I remarking on how cool this town looked. What did I know of Cologne? I didn’t know anyone who had gone there and I associated this city with part of the greater Rhineland area including Düsseldorf and Essen; names that had passed my ears while learning about World War 2 and the annexation of this area after World War 1.

What was it about this episode that appealed? Watching a dripping, fatty, steamy-hot piece of pork get taken out of a large cauldron and served on a plate in a traditional German beer hall.

Along with this heap of pork meat came small glasses of Kolsch, a light pale beer served in .2 liter glasses and replaced constantly by bar backs who patrol the beer halls for empty glasses. 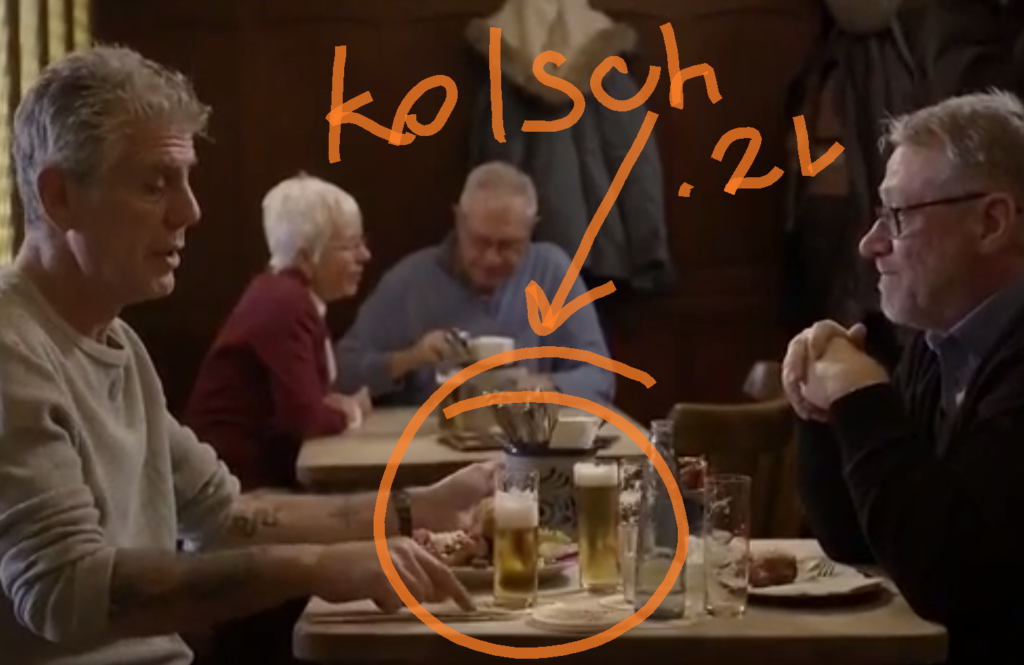 Anthony Bourdain gushed about Cologne. And, since we take his word very seriously (I love this guy: his advice and show are fantastic) when we got invited to visit Cologne, Germany by our new-found friend Felix (whom we met in Vietnam) we just had to go.

Cologne was a complete surprise and an absolute joy of a visit. Felix was an incredible host and even let us use his bedroom to stay in while we were in town (more on that later).

Is Cologne worth a visit? Yes.

It’s a small city and the locals describe it as “…not very beautiful, but the people are really open and it’s better than Düsseldorf!” I wouldn’t have any comment on that as we didn’t go to Düsseldorf, but the locals loved to talk about Düsseldorf as “that other city” and the two have a rivalry that dates back to the 14th century when the two went to war briefly. I found this quite funny until I realized that New York City and Boston have the same kind of rivalry (albeit a lot younger and more based around their baseball teams). Can you blame, ’em?

The highlights of Cologne (or Köln as it is called in German) include the Gothic cathedral in the old square. It looks really creepy and black and, as Jackson put it: “like it was made of bones”. I think it was somewhat sinister looking, too. Do you agree? 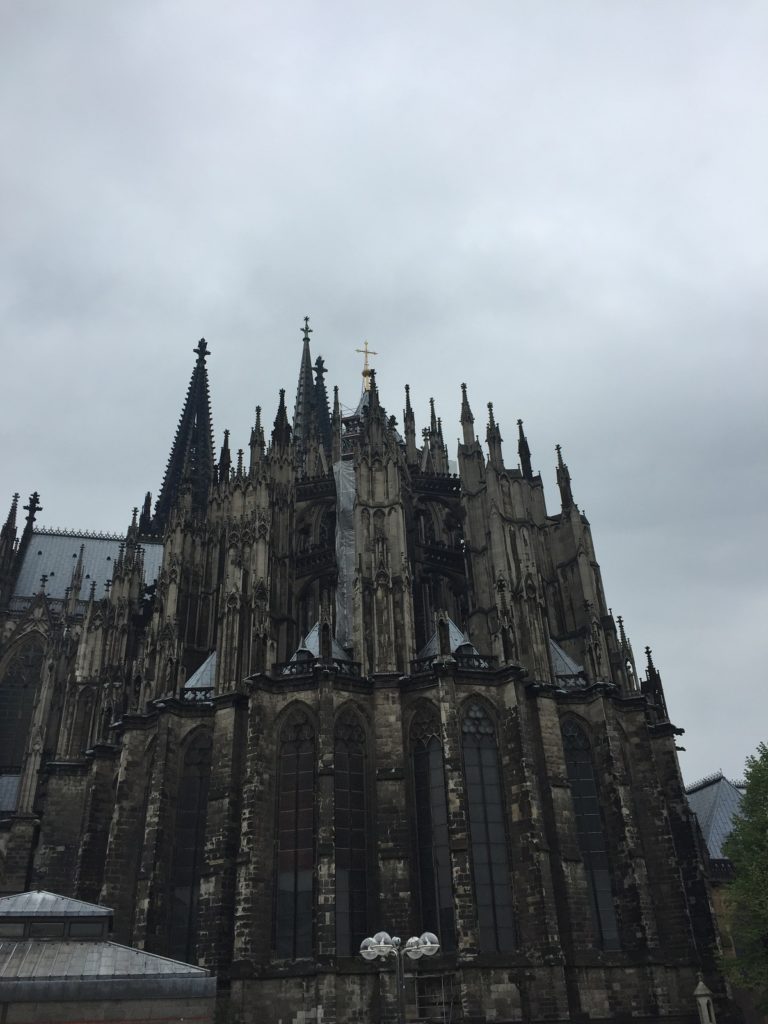 We also went to check out the Church of Saint Ursula which has a “bone room”, a one room Sept where the walls are covered in the bones of (supposedly) 11,000 virgins who were sacrificed by the Romans. Is this number true? Is this legend of the virgins real? No one knows. But, what they do know (and what we sure as hell saw) was a room covered in bones. It was creepy as fuck. It was also 2 Euro to go see it. The rest of the church is also pretty creepy, so if you want to go to a place that is probably haunted, I’d recommend a stop here. 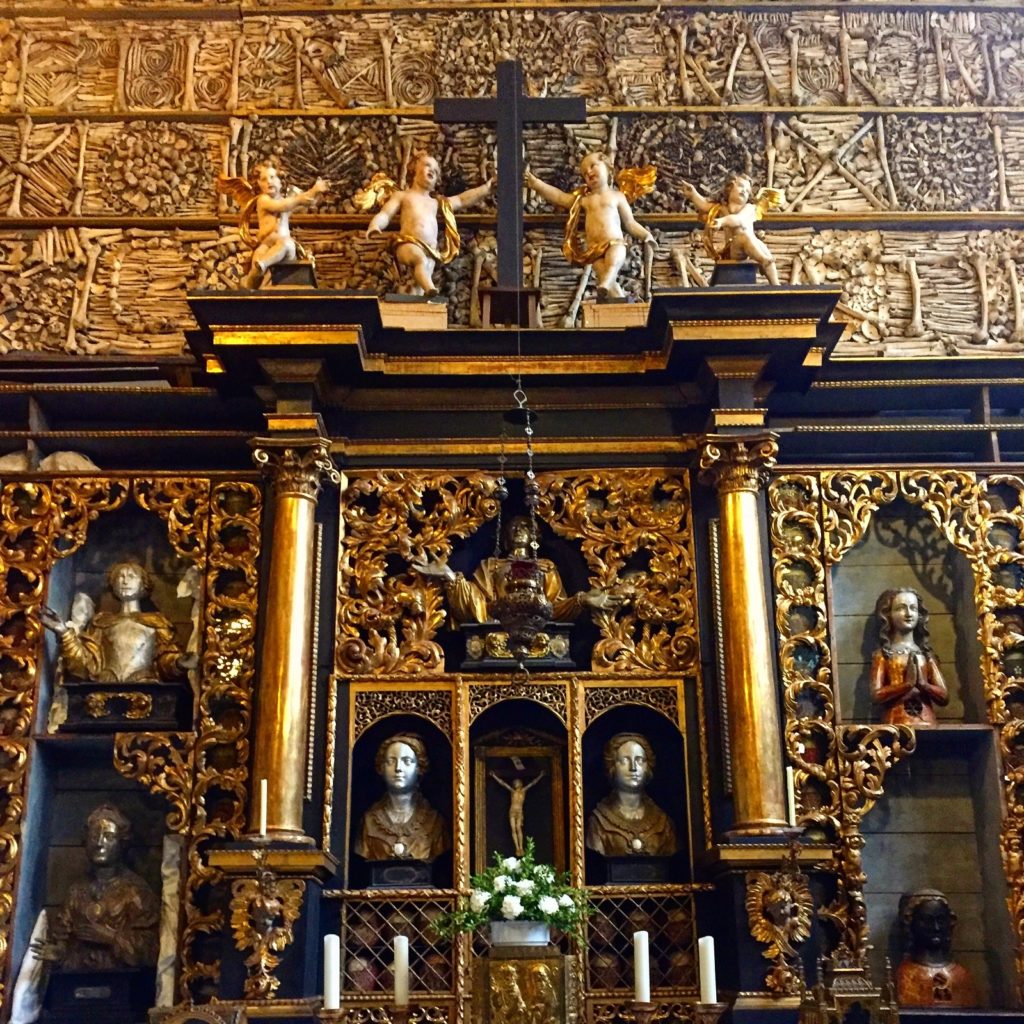 But Cologne isn’t all about creepy old churches! By chance, Jackson and I walked into a Germany Beer hall (called Bier and Weinhaus Vogel)  while looking for lunch and stumbled upon the most delicious and authentic food we’d had in a while. 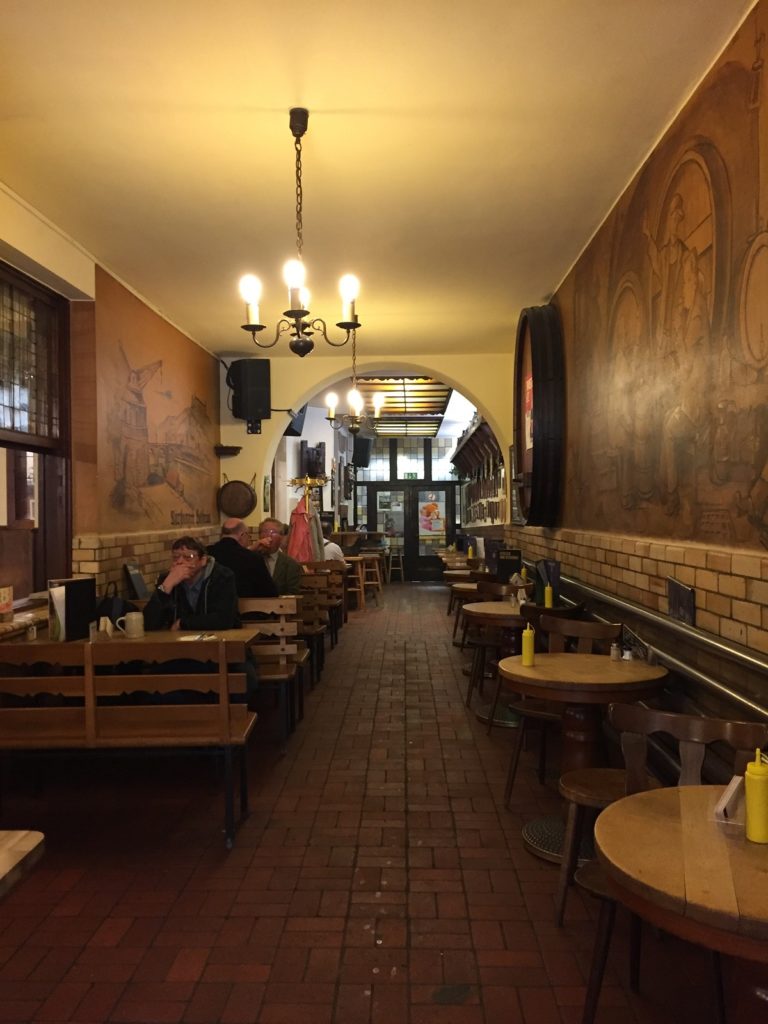 I ordered the Schweinshaxe: remember that dripping, hot piece of pork from the Bourdain show? That’s what this is called. It’s served over a bed of sauerkraut and it was SO GOOD. Jackson ordered a Schnitzel which is a breaded and fried piece of pork served with potatoes. We cried a little while eating this meal: partly because it was so damn good and partly because we were SUPER full and couldn’t eat more but had to. Oh, and the, say, 3 pounds of meat that we consumed came with glasses of Kolsch! Behold! Small .2 liter cups ‘o beer! And they’re cheap: about $1.50 USD each. 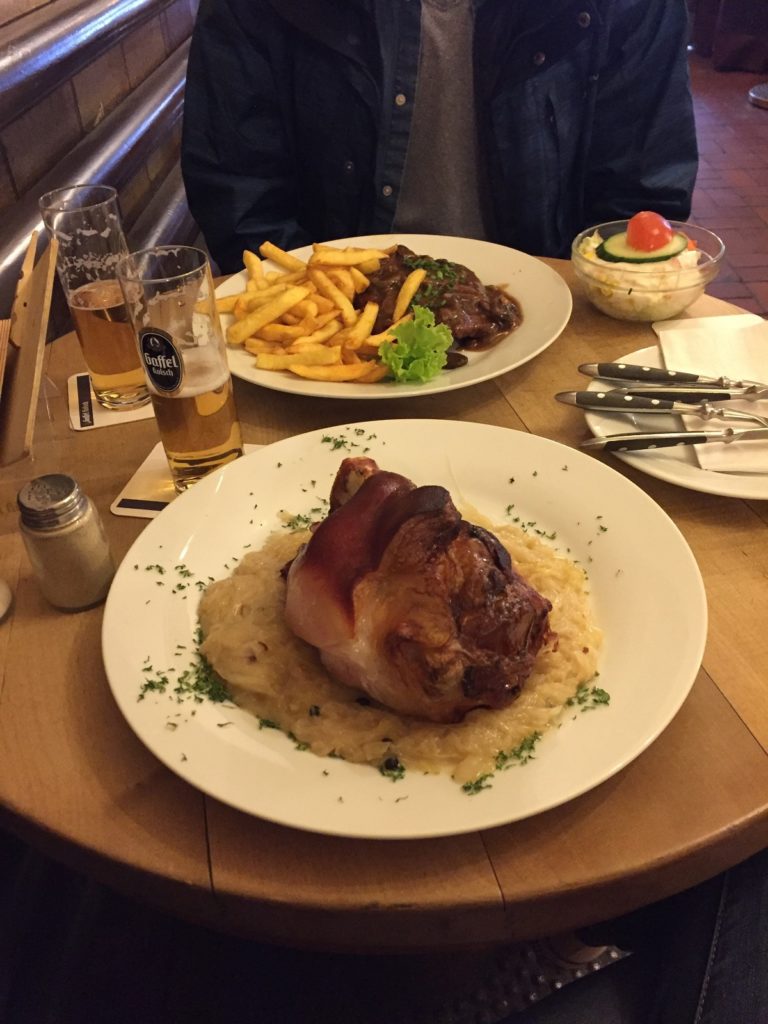 We opted out of doing a walking tour. At this point we’d done about 3 (1 in Amsterdam and 2 in Paris) and were feeling burnt out. Also, walking around the city and checking out the “love-lock bridge” and remnants of the old gate was cool enough on its own. 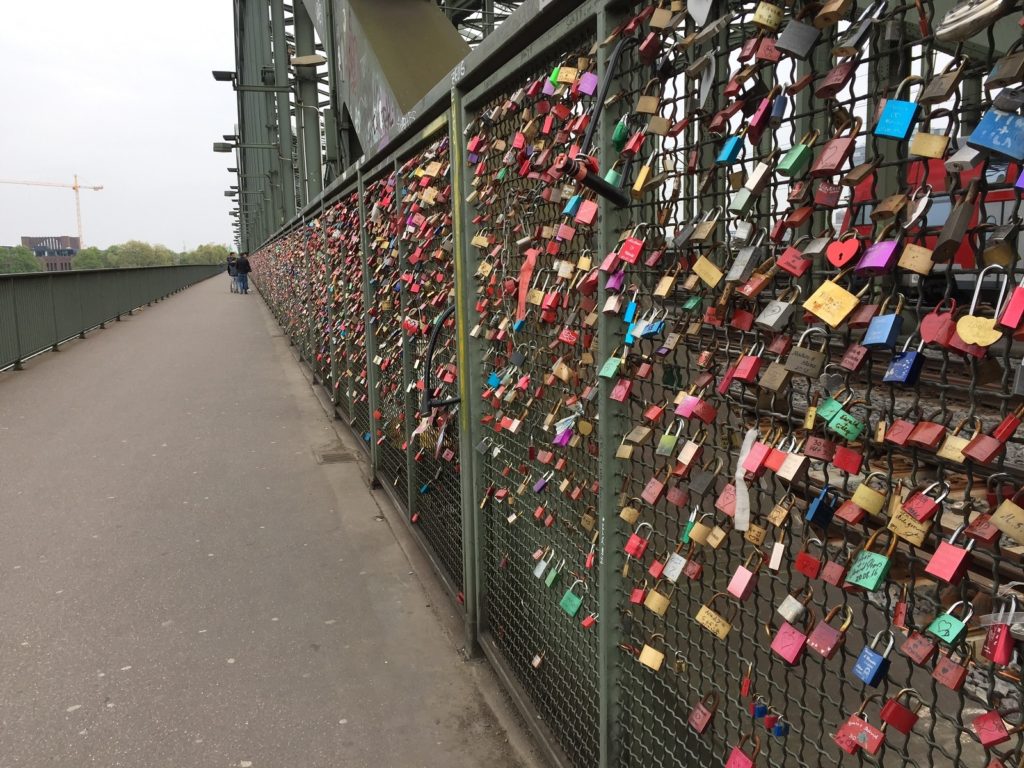 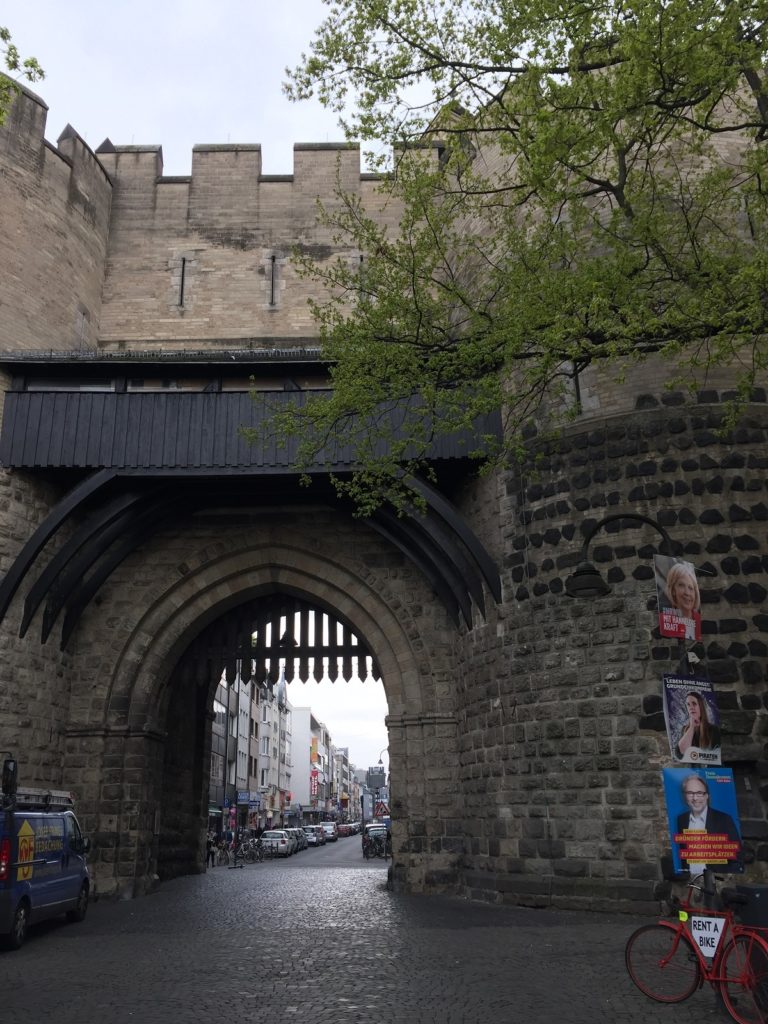 One of the cool aspects of being in Cologne was the large rally that happened the second day we were in town. Trams shut down and one of Felix’s roommates recommended we go check out Bonn to get out of town “…we don’t know what this will turn into.” Jackson and I considered Bonn (about 45 min away by train) but opted to stay in town and get some coffee and treats with Felix and his roommate, Dennis.

The funny thing was that the news was reporting riots and a large demonstrations in Cologne against the rise of the alt-right groups who have been gaining in popularity and you wouldn’t have known it where we were. Everything was peaceful and quiet. We even went and got delicious food later that night and met Felix’s friend, Christina, who was lovely.

It’s a weird/wonderful time to be alive, for many reasons. Asia wasn’t nearly as politically charged as Europe has been up until this point, but between the looming elections in France which had Paris all riled up, and the demonstrations in Cologne: Europe is electrified. I can’t speak from experience because I haven’t been to The States since Trump was elected, but I imagine the same thing is happening there as well. The West is full of spicy anger and it’s bubbling over all over the place. It is at once thrilling and scary to witness, maybe a bit like a birth: dirty, smelly and beautiful. But, a birth of what? What identity are we trying to embrace?

The western world’s angry, that’s for sure. It’s not just The States.

Ok: back to Felix. This guy was, for lack of better words, a real stand-up, amazing guy. I’m saving a post for him and what he did for us because it’s too big and generous to share in this post. More to come….