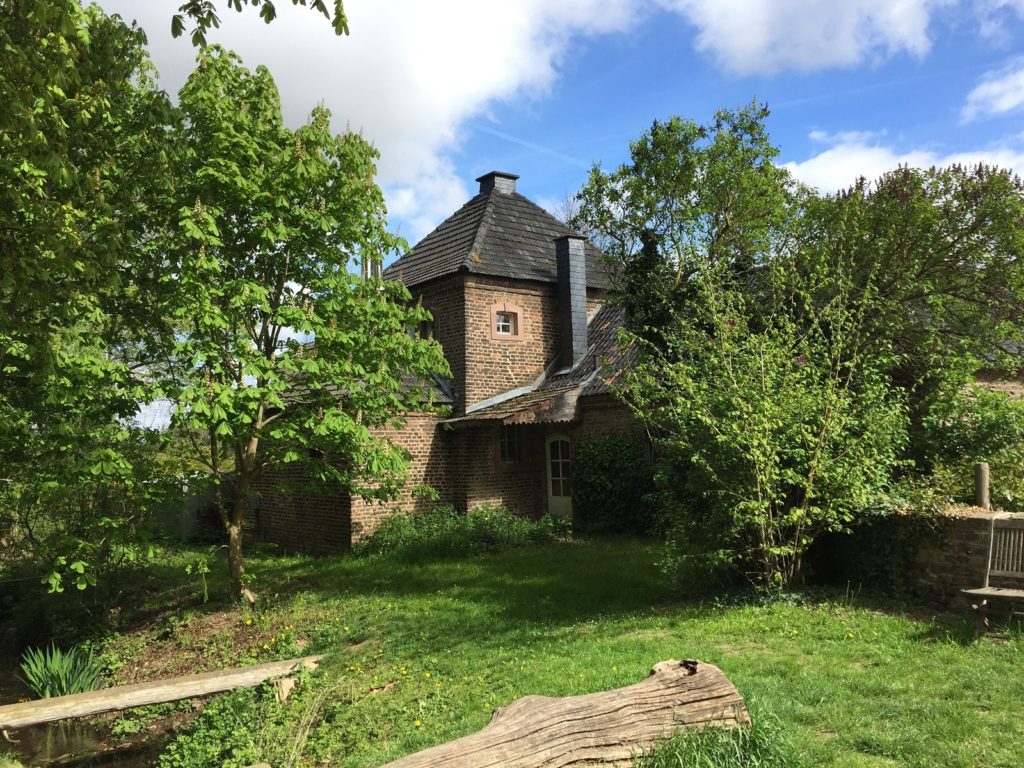 As with Hiroko in Kyoto, there comes some people along this trip who open up their lives to us and show us an experience that is completely unique and unforgettable. Felix was one of these special people.

Ok: so, some context. Let’s rewind back to Vietnam where we all met in March in a beach town in Nah Trang. At the time we were sloshing hot-pot down our chins and talking about what “home” meant for us while sitting at a small plastic-chaired, florescent light eatery after a day spent lounging at the beach.

Felix was telling us about Cologne. He was describing the cheese. The beer. The food. The people. His job. I remember listening to his stories of being a firefighter and how excited he was by his job. Agreeing to go visit him was a no-brainer.

When we arrived in Cologne, and were walking down the street toward his apartment, he popped his head out of his first-floor apartment window as if a bell had gone off and saw us coming toward him. All smiles, he introduced us to his roommates and friend, Christine (a doctor-in-training who speaks 5 languages and just got back from healing patients in Africa, because, you know, she’s a bad-ass) who made us a delicious lentil and sausage stew for dinner.

Felix mentioned the village where he grew up and suggested that he could take us out there to see it in a few days.

That Sunday, borrowing his sister’s car, Christine, Jackson and I jumped in to get taken out to the small villages that dot the German countryside around Cologne.

The first stop was a beautiful village named Zülpich with ruins and an ATM (yay!). We enjoyed walking around and looking at the cobbled streets and gardens. Felix described climbing all over the ruins as a kid. That struck Jackson and I as very strange: nothing in our countries is anywhere close to being a ruin! And if it was, there’d be no chance that kids could climb on it. As we explored the gardens, the church bells started chiming madly; it set a wonderfully romantic mood.

Next, we pulled into a lovely old dairy farm made of red bricks called Haus Bollheim Handels near Oberelvenich. Felix would point to a place and describe a childhood memory and the people he played with. Then, like magic, the people he’d describe would walk out from around a corner! We wound up meeting about a dozen different people who had known Felix when he was a kid. We got invited to have cake and coffee with some of them and wound up chatting about travel with a group of extremely well-spoken locals (I honestly felt really bad that they all had to speak English on Jackson and my behalf– I wish I spoke German).

The local pastor of the church came to join us and invited us to come see the chapel. It was a simple place and the pastor, a very sweet, friendly and calm woman, explained how the community had built the chapel and how they were hoping to get the government’s approval to build a new church soon. I was struck at how simple and beautiful it all was. This small one-room building was so important to the community and was a place for people to come together to be around each other.

The pastor looked at me as we were saying our goodbyes and wished me peace and “inner calm” for the future. I tried very hard not to start crying. It was such a simple wish for me and yet was so full of goodwill and earnestness. I didn’t feel like she wanted to convert me or get me to find Jesus or give me pamphlets about the church; none of that. She was just being extremely sweet. I told Felix as much and he agreed, saying that “she is a very special person, she makes everyone feel calm.”

I’d never seen such a perfect example of how it “takes a village” to raise a child until this point and although I had only been around it for an hour, I could feel how loving, supportive and personal it all was. Felix made more sense to me.

We went and got pizza in Düren at a delicious little spot hosting post-church goers in their Sunday suits.

Our last stop of the day was Felix’s parents’ home in Linzenich. What was once an old house was converted into a large two-part home with modern and traditional interiors. Making a cup of coffee and getting to know the dog, Felix pulled out several pieces of cheese that his village makes for us to keep. It was so sweet of him to get his mom to pick this up for us! Because of the political rallies in Cologne the day before, all the weekend markets were closed so we weren’t able to buy any of the cheese that Felix had told us about in Vietnam. The fact that he’d had his Mom pick some up for us anyway was super sweet. The cheeses were delicious, one of my favorite being a soft, mild cheese made with pieces of walnut.

The next day, Felix invited us to come to the fire station he works at for a tour. We hopped a ride with Dennis (who is also a firefighter at the same station) and went to meet Felix as he was finishing an overnight shift.

I have no memories of touring a fire station as a kid. I don’t think it ever happened, to be honest. My sister went when she was little, but somehow I fell through the cracks. Going to this tour was awesome. I got to have a full-on tour of everything! Felix showed us the fire trucks, the ambulances, the training rooms for firefighters and we even got taken up in the man lift or Mobile Elevated Work Platform (MEWP) which can get up to 30 meters high and is designed to give firefighters a chance to fight flames that are higher up in the building. We used it to get a sick view of Cologne.

The fire station was awesome. I was surprised that when the emergency bell went off everyone was super calm. No wasted movements, but no running and frantically throwing their gear on like in the movies. The emergency bell wasn’t even a bell, really, more like an alarm clock that’s had its volume button turned down.

As Felix showed everything to us I could really sense how much he loved his job. He’d get giddy as he explained what the “jaws of life” did, pulling it out of the firetruck and holding the massive piece of equipment up. I held it for a second and felt how damn heavy it was. Felix explained how hard it is to hold it above your head and try to rip open a totaled car. Nope. No thanks.

The ambulance was wild, too. I’ve never been in an ambulance (lucky me) and seeing how organized, clean and succinct everything is was really reassuring. Firefighters and emergency-responders are wizards of organization: their lives- and the people they help- depend on it.

I loved trying on the firefighting coats and helmets. We even got a chance to put on a gas mask and do a few training drills while carrying an oxygen tank (I wimped out of after a few minutes. The gas mask is not easy to breathe in!!). Having a full-on ax on our belts was awesome, too. How often can you say you’ve walked around carrying an ax? 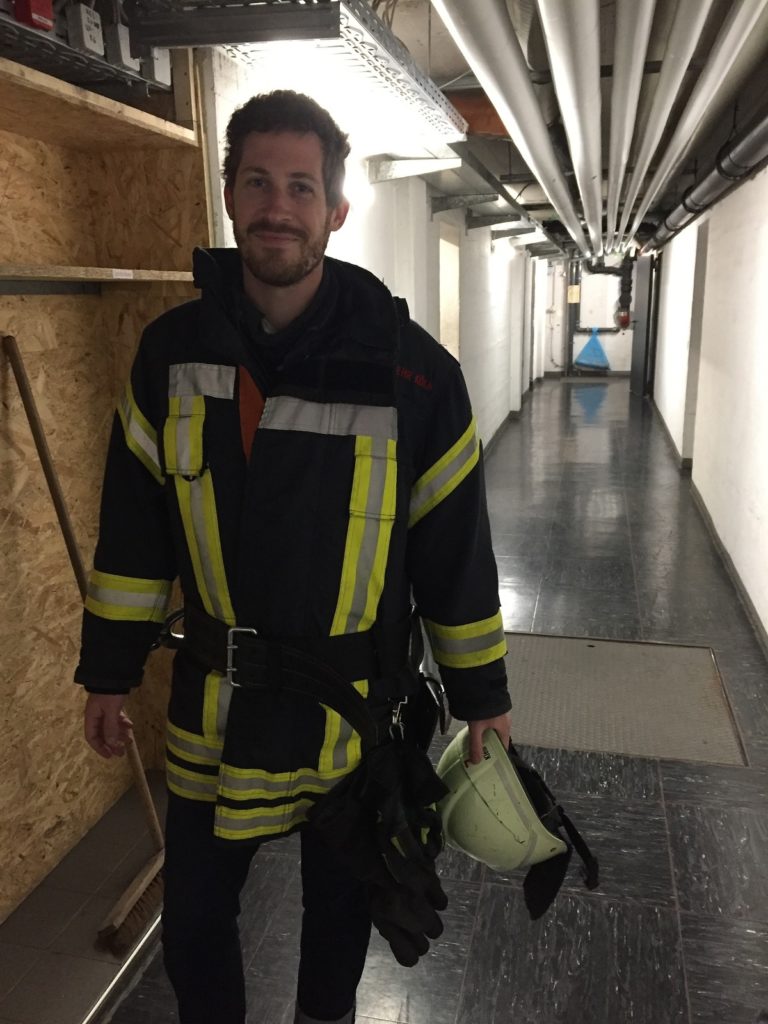 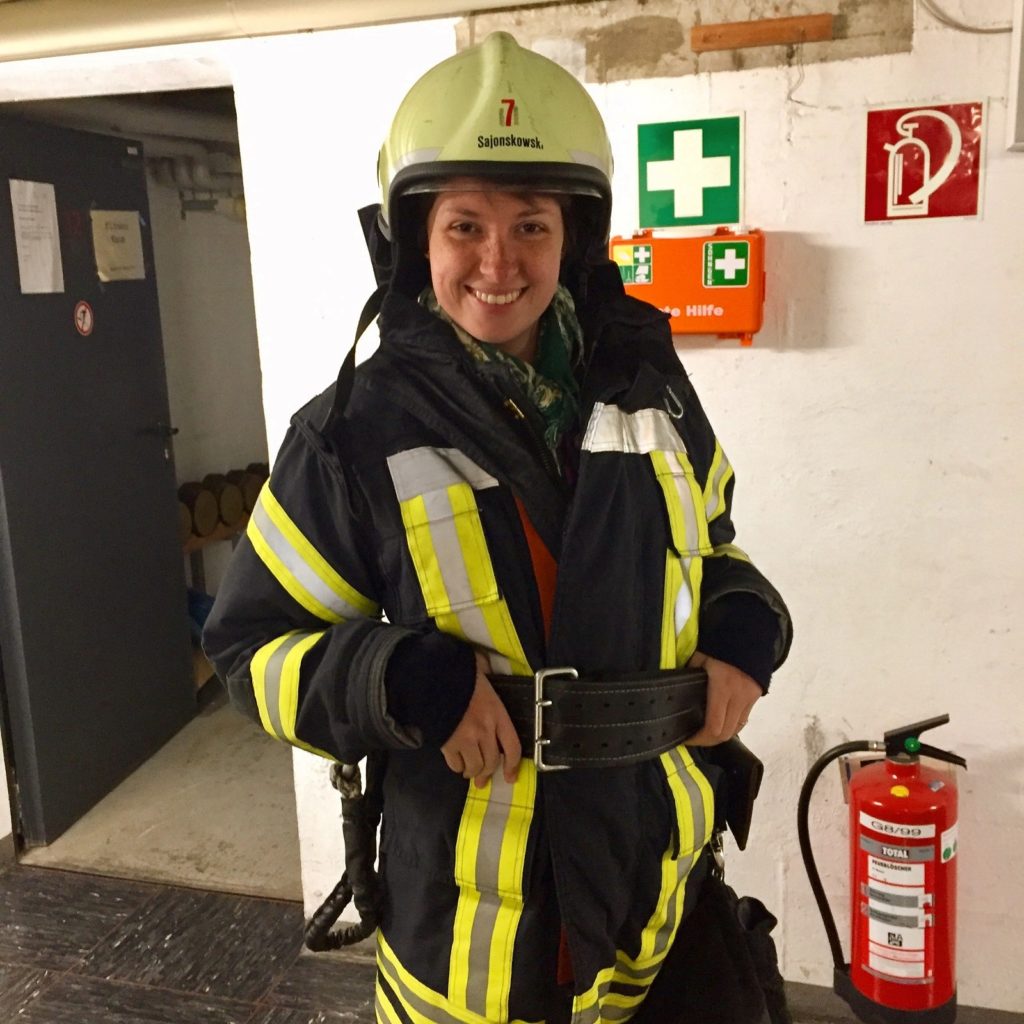 As a thank-you we took Felix out for lunch and offered our home in New York as a place to come if he ever decided to visit. I hope he does. He’s very curious about seeing Ground Zero and meeting firemen in New York City. But, even beyond that, Jackson and I would love to repay the wonderful favors he did for us and show him a slice of our lives. We’re very lucky to have met him.