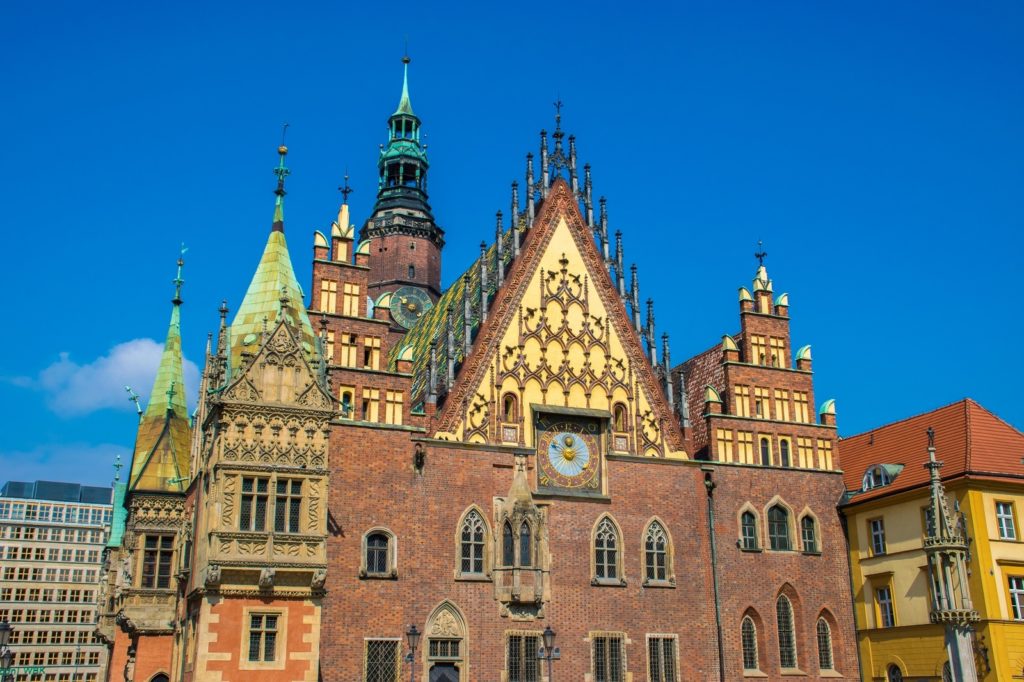 Pronounced Europe’s Capital of Culture in 2016, Wroclaw, Poland has since been firmly placed on the map as a destination for travelers looking for the best of what Europe has to offer. 24 hours in Wroclaw is a great amount of time to take the city in while leaving more to see. There are so many great things to do in Wroclaw – it’s just a matter of how much time to spend here.

Wroclaw is pronounced “vrat-swav”, but I think saying “Raw Claw!!” and holding up my hand as a claw is a lot more fun (and super wrong, the locals won’t know what the hell you’re doing).

Being that it’s only 4 hours from Berlin, 4 hours from Prague, and 2 hour from Krakow: it’s a convenient stop on the way. But, don’t have high expectations for the highway from Berlin. Apparently Hitler built that road to better get troops in and out of the occupied country and it has since turned into a bumpy mess (has it ever been repaved?). It’s strange, too, because the rest of the highways are totally fine.

I spent 8 weeks here in the summer of 2016 laughing, crying, sweating, not-sleeping and studying my brains out while working on the Delta. For anyone who is an English Language Teacher the Delta is a program run through Cambridge University and is a rigorous diploma program designed to give experienced teachers a chance to learn more about their craft and maybe get bigger and better jobs in their field. It’s a bit like a master’s degree, but shorter and cheaper. 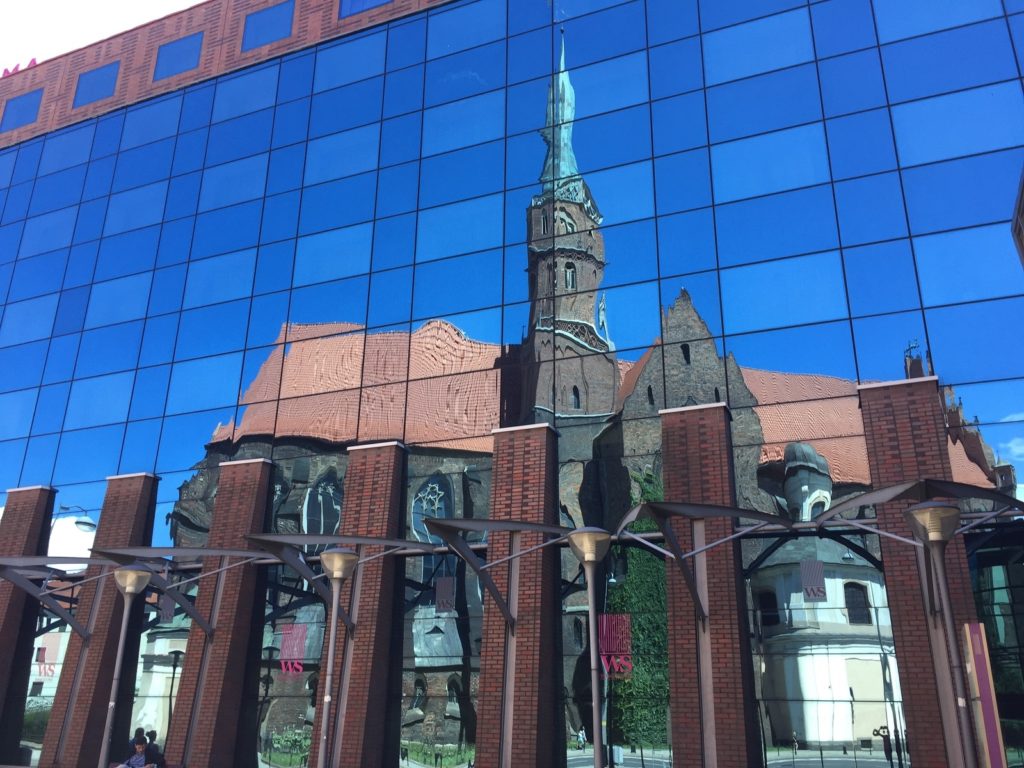 When I first arrived in 2016 I had no idea about which places to visit in Wroclaw. It’s not a very large city – about 620,000 people – the 5th largest city in Poland. The great thing about a city this size is that 24 hours in Wroclaw is very doable without stretching yourself too thin. After spending 2 months here, I learned a lot about what to do in Wroclaw!

Visiting again in 2017 reminded me of how much I love this city. It is a college town, first and foremost, hosting about 130,000 students during the school year. It feels vibrant, young, and very European. There are fantastic little bistros, coffee shops, cheap eats and bars all over the place.

Not to mention the architecture. I mean… it’s friggin lovely. Places to visit in Wroclaw include a glance up in, really, any direction.

Throw a stone and you’ll hit a gelateria. If there is nowhere else you go while you are looking for places to visit in Wroclaw – please go to a gelateria! They are delicious!

Honestly, Wroclaw, Poland is HIGHLY underrated as a destination and after living in this country for 2 months I can say that it is really lovely – and it desperately wants to shake off the shadow of the Soviet Union and being associated as one of those “Eastern European” countries.

Wroclaw was heavily damaged during World War 2 and was not treated well by the Soviets, either. It wasn’t until Poland entered the EU in 2004 that the city began its renaissance. Now, the center is vibrant! You can’t walk through it without hearing some kind of violin, live band or seeing someone blowing bubbles.

What to Do in Wroclaw:

Go on a Free Walking Tour:

There are free tours offered in the Rynek (the city’s center). I’d start by taking one of those on the morning of your arrival. They’re usually 2-3 hours long and can cover anything from the dwarves of Wroclaw to the Jewish quarter.

After a tour, take some time to photograph the Rynek which is also the largest central square in Europe. It boasts renovated buildings, churches, parks and historical centers. This is one of my favorite places to visit in Wroclaw. In the afternoons, people will come out and create bubbles that little kids will flock to like seagulls to french fries on a beach.

Try to Find all the Dwarfs:

What do you need to see while there? The Dwarfs are a great place to start. They are everywhere! They’re really cute, too. There are a bunch of great treasure hunts you can go on to try and find as many as you can. Currently, there are about 350 (although only 165 are legal- many are counterfeit!) of them scattered around the city.

Dwarf hunting is a great activity to do with kids or as a couple. The dwarfs are all themed differently and will tell its own little story. Trying to “catch them all” is a popular activity among all the things to do in Wroclaw!

Take a Walk and Find a Cafe:

Strolling around the city you’ll find all sorts of side streets filled with doorways to peak in. My favorite cafe is Vinyl Cafe– a great place to get a coffee and then a glass of red wine while relaxing in a cushy chair and listening to a  record.

There are tons of churches/cathedrals dotted all over, one of the more famous ones – among the places to visit in Wroclaw – is the Cathedral of John the Baptist. It’s a cathedral located on its own island in the middle of the river Oder.

If you are looking for other places to visit in Wroclaw, the inside of the University Chape is gorgeous. I like to peek my head in to check out the vibe. Each church is different and has a character of its own.

Wroclaw, Poland is full of “milk bars” that serve cheap, delicious Polish food. These Milk Bars are not quite restaurants. They served as cheap places to get food for the working man during communism. They’re a holdover today and are sprinkled around the center. You can pick up a huge meal for 17 zloty ($4.50 USD).

For things to do in Wroclaw, you should definitely consider filling up on Pierogi, a local treat filled with meat and/or veggies.

We met up with a colleague of mine who also did the Delta and is a Wroclaw local from Scotland. Jon (or as we call him: Jono) teaches English in Wroclaw and met up with us for some beer. There’s a fabulous bar called Ambasada that serves 5 zloty tartar ($1.25 USD) and beer. It’s a great hang.

We wound up finishing a drunken night at Setka– a Soviet Era style bar that I used to go to after Delta lessons to blow off some steam. They give you a piece of bubblegum for every beer you order.

It’s expected that if you go out with Poles, you’ll get drunk. Our night was no exception. Beer is cheap. Vodka is cheap (5 zloty a shot) and the bars are open late. The Polish love to drink.

How to Spend 24 Hours in Wroclaw:

Get a coffee and breakfast at Bulka z Maslem.

Go on a walking tour in the Rynek.

Walk over to the Hala Targowa Market and pick up some fresh veggies, sample some meat, and oggle the stuff for sale. This market is inside a beautiful building near the river that was built between 1906-1908.

Get lunch at a milk bar. You could try Bar Nadwaga, which has delicious traditional Polish food.

Go to the top of St. Elizabeth church and see Wroclaw from below. Entrance is 5 zloty (about $1.25 USD).

If you have time, grab a gelato (or as the Polish will call it: Lody). I’d recommend getting a cone at Lodziarnia Barton which is in the center of the Rynek. They make the gelato in the store and you can see it churning as you walk in! Delicious.

If you haven’t been already, you should be collecting all the dwarfs you can find on your phone! If you are looking for what to do in Wroclaw, dwarf hunting is a lot of fun.

Go out for drinks at Ambasada. If you’d like something quieter- an totally different- you can try Art Cafe Kalambur, which is a real nod to the art nouveau scene you’ll see if you go to Prague. You’ll recognize it by the floating alligator out front! Finish the night here by drinking vodka.

Best Time to go to Wroclaw:

I’ve now been to Wroclaw in the summer and the spring and the summer was without a doubt the best time. I can only imagine how cold Wroclaw can feel in the winter!

In the summer, the students have gone home for the summer, replaced with far fewer tourists. In summer and spring, pop-up stalls of fresh fruits and veggies will line the streets and festivals happen on the weekend. I’d recommend spending your 24 hours in Wroclaw on a weekday so you can avoid the worst of whatever crowds come. But even if you are here on a weekend it never gets too busy.

Wroclaw, Poland doesn’t get very hot in the summer: average high temperatures hover around 24C/75F making walking around the city and finding places to visit in Wroclaw quite pleasant.

It’s really not a very crowded city as the brighter gems of Central Europe: Prague, Krakow and Berlin are only a matter of hours away. That said: Wroclaw is changing.

When I was there, there wasn’t a Hard Rock Cafe… now there is. A Starbucks sits directly across from the iconic old town hall in the Rynek. Oh, and don’t forget a McDonald’s presence just a couple doors down. What was once unthinkable 10 years ago is now a reality. Wroclaw has fully embraced the rapid globalization and is growing as a result. Whether that’s a good or a bad thing.

If I were you: I’d try to spend more than 24 hours in Wroclaw. As a weekend getaway, this is a great destination. It’s cheap, it’s quaint, and full of history. There are lovely parks, tons of cobbled streets to walk, and it’s largely quite safe. I think of Wroclaw as a great destination for anyone looking to really saturate themselves in a smaller city.