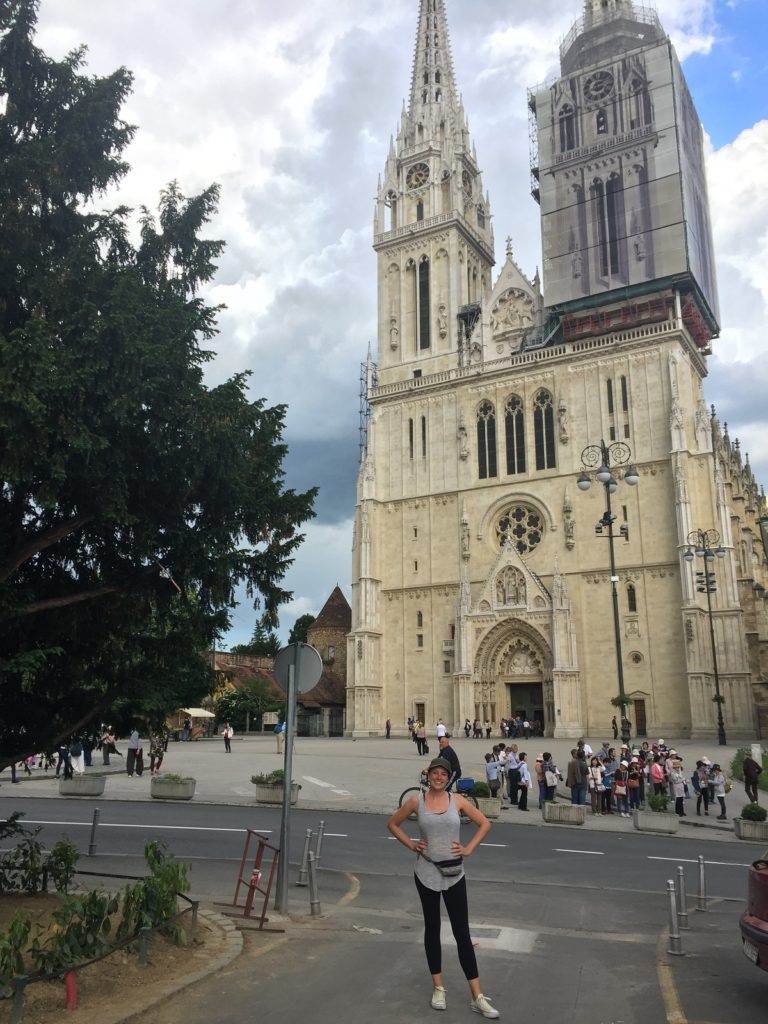 Hitchhiking has never appealed to me. I’ll admit there’s a romantic aspect to it that has been perpetuated by Hollywood and Jack Kerouac, but I’ve never wanted to do it. In New Zealand, when we went in 2013, Jackson and I picked up a couple of hitchhikers around the Fox Glacier who needed a lift to their car in the parking lot (it’s a long walk to see the Glacier these days as it has melted so much). It was raining out and Jackson and I took pity on these two. They were in the car about 5 minutes. It was pleasant. We chatted a bit about travel (what else?). I think they were from Sweden. They got out. We drove away. The End.

So. There we were in Budapest, considering our options on how to get to Zagreb, Croatia. All of the travel sites were telling us that the 3.5 hour drive would take more like 9 hours because we had to hop a bus to Vienna first and then take another bus from there. Gross. Also, the pleasure of that trip would cost us about $90USD for the two of us (WTF?), easily the most expensive cross-country trip throughout all of our travels. What do we do? Flying wouldn’t work: we’d have to fly to Warsaw and then down and that would have taken just as long and cost twice as much!

That’s when I turned to Blablacar.com.

I know: I sound like I’m writing a testimonial, but this was too cool. The way it works is you put the destination of your choice onto the site (kinda like the internet version of using a large piece of carboard to advertise to drivers on a highway that you want to go to “ZAGREB”). Then, drivers who are going that direction will offer to take you with them for a fee. It’s a really organized hitchhiking service. Yes!

For $35USD Jackson and I got a ride to Zagreb with Timbo, a German ex-pat who has been living in Budapest with his Turkish girlfriend. Timbo was really nice! He explained that he drives down to Croatia a few times a year and loves it. He asked how long we were planning on staying in the country.

“A little over two weeks.”

“Nice! Very very nice. A good amount of time. You picked a good country to end on.” He said.

He got us down to Croatia really quickly and we chatted quite a lot about travel and our future (Timbo is moving to Cairo soon). He even dropped us off at our AirBnB. Sweet! I can’t believe I didn’t use BlaBla car until this point in our trip. It was awesome. I’d use it again in the future. It’s organized and you know a bit about who’s driving you (even read reviews about them from other passengers). Winning!

First impressions of Croatia were excellent! The roads were well paved. The countryside was dotted with little orange-rooved villages and green pastures. “Just wait until you see the coast.” Timbo explained. “This is beautiful, yes, but the coast is even prettier.” (We had no idea about how right he was). Waving goodbye to Timbo we settled into Zagreb.

Croatia’s history is long, bloody and varied. It was Roman, Venetian, part of the Ottoman Empire, The Hapsburg Empire, The French Empire, bombed by the Germans and Allies in World War 2, it was a Soviet Puppet state under Yugoslavia and, finally, gained independence in the 90s (after fighting with their neighbors for a while). As a result of all these different influences, a place like Zagreb is full of strange architecture with medieval and modern; renovated and dilapidated; occupied and abandoned buildings.

Zagreb is not very big. It was easy to walk around and take it in over the course of two days. I found it incredibly quiet and empty after the days we spent in Budapest.

When we were reading about Croatia and deciding whether to go, one of the deciding factors was the descriptions of the food I most remember reading stuff like: “Incredible” and “You’ll gain weight”. They were not joking. Our first meal in Zagreb was at a touristy-looking pasta shop and the gnocchi I ordered was MINDBLOWING. Damn! Incredibly delicious! Soft, chewy, fresh, creamy. Delicious and cost about $10USD.

It didn’t stop there. We had lunch at Vjestica Bistro which was fantastic. My soup and then mushroom toast was so good that when the other table in the bistro ordered it as well, they demanded that the chef come out so we could thank him personally. When he poked his head out of the kitchen all of us broke into applause.

Walking around Zagreb is fun. There’re really tiny little streets that wind their way up the hills and lead to some great lookouts. Zagreb is built at the base of Medvednica mountain and sports beautiful views of the green slopes. Much of the city is on an angle so it’s likely you’ll find stairs and steep streets as you wander.

We went to check out the “Museum of Broken Relationships” which was very poignant and interesting. I was a little worried that the focus of the exhibits would be on heartbreak and sad stuff, but it wasn’t at all. It’s basically a collection of donated objects with stories attached explaining what happened to end the relationship. Some stories are funny, some are sad, and some are really strange. Walking through the different rooms (each themed) and reading the stories and looking at the objects took a few hours and didn’t get old. It was cheap to get in (about $4USD per person) and well worth a visit. 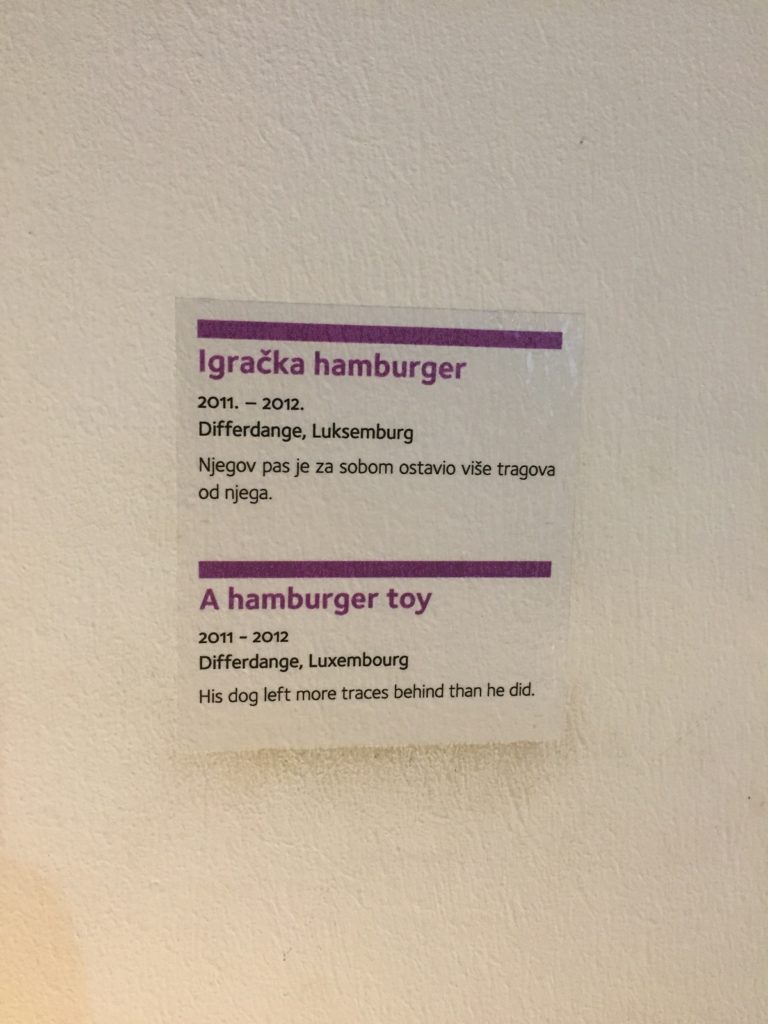 Overall, Zagreb felt very European. It has similar architectural styles to Poland and Hungary, but the orange roof tops and funky tiles make it distinctly Croatian. 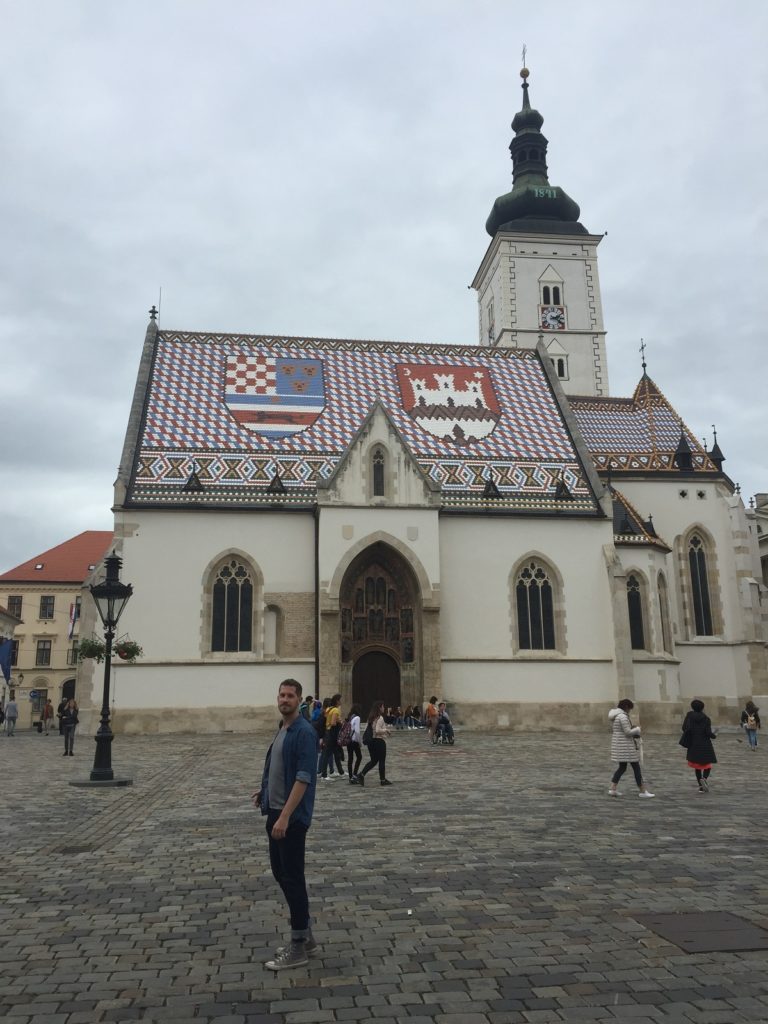 The people were friendly, the food was fabulous and the city was easy to navigate and stroll through. 2 days is plenty and it is definitely worth a visit.