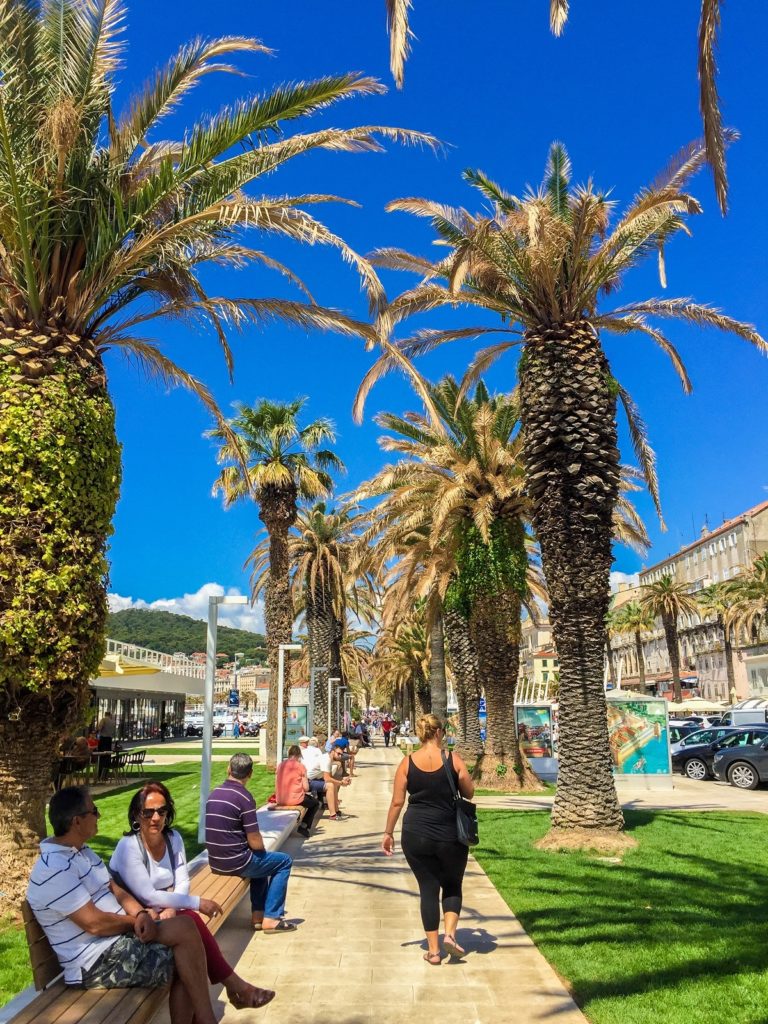 Croatian cities hold quite a lot of appeal for tourists: they’ve got airports, buses zip between them, people speak English, there are tons of bars and restaurants, and some of them are full of ancient ruins.

As we drove down the coast toward our final destination of Dubrovnik, we stopped to check out three cities: Zadar, Šibenik, and Split.

We’d first heard about Zadar from Timbo (our driver from Budapest to Zagreb) who had told us he’d be staying there to go windsurfing. Zadar is the oldest continuously inhabited city in Croatia and at times you can really sense how old some of the ruins are.

But, before I go into Zadar too much, I want to tell you about how jaw-droppingly beautiful the drive is to get to Zadar from the North. I don’t think I can truly convey just how mind-blowing the road trip from Povile to Zadar really is.

There are major highways in Croatia and then there are two lane roads that act as the local and service roads. The highways are tolled, so we avoided those most of the time we were driving. This led to some intense driving through some serious back-water places.

To get to Zadar from Povile takes about 3.5 hours. The first two can get a little monotonous as you get used to seeing small farming villages, herds of cows crossing the roads and rugged mountain landscapes that march off into the distance (you know: boring, right?). Then: the land drops out from beneath your wheels and the road can do nothing but plunge toward the coast with hair-pin turns, zig-zags and views so spectacular you feel like the car could go over the edge because you can’t take your eyes away from what you’re seeing.

It’s like: verdant, thick forest gives way to arid, mountainous desert and the crumbling Dalmatian mountains. “Gorgeous”, “stunning”, “how-can-this-be-real!?”… whatever you want to call it: road tripping here will leave other road trips you’ve taken a lot to live up to.

We pull into the city (the fifth largest in Croatia) and were confronted with our first real tourist traps and crowds. Walking around we noticed a bunch of ice cream shops selling elaborate displays of ice cream and decided to get some. It was TERRIBLE ice cream! STAY AWAY FROM THE GELATO/ICE CREAM IN CROATIA. This was so bad I COULDN’T EAT IT and thew it away. (I did feel like a small angel died somewhere when I did, but the sacrifice was worth it). Yech.

The ruins in Zadar are all reconstructed after the city was bombed and shelled heavily over the decades due to WW2 and the breaking up of Yugoslavia. The old buildings are seriously old, though. I was reminded of Rome in that sense (these are contemporaries of Ancient Rome).

There’s special chimes in Zadar that play music as the surf hits them and you can sit on the edge of the city and listen to the somewhat mournful chimes of the waves. This, and the ruins, felt like all there was to see in Zadar. We walked all over and found that the old-town was pretty, had some really old buildings, but didn’t hold our attention for too long. Zadar overall felt kinda “meh”. We spent the night in an AirBnB before shoving off the next morning toward Šibenik.

Šibenik is a small city with some old ruins as well. We wandered a bit, marveling at the old structures (which, let’s face it, look stunning in the daytime sun). After lunch we continued on toward Split.

Split is the second largest city in Croatia and was founded by the Greeks around the 2-3rd Century BCE. It is old. There are ruins on the main promenade which were built by the Romans in 305CE and these are several hundred years younger than the founding of the city! Yeesh. Jackson and I enjoyed walking around the city. It has a real bustle and is FULL of tourists. Southern Croatia is quite a bit more crowded than Northern Croatia.

I liked Split because for several reasons:

I lost my phone. I only realized it was gone several hours later, after we had checked into our AirBnB in Brela, an hour away from Split. SHIT. I’d gotten the phone from a friend in Vietnam after my bag was stolen. I can’t lose this one too! WHAT HAPPENED TO IT?

I searched my memory and realized I’d left it in a bathroom on the Promenade in Split.

Jackson and I searched online for some kind of phone number and could find nothing. We had to drive back.

I get to the small espresso shop I knew I’d left my phone in and a young man with chestnut hair and heart-breaker eyes behind the counter tells me my phone is gone: “at the police station” he tells me. WHAT? How do I get there!??

The young man takes pity on me. “You have any money?” He asks.

“No. Nothing.” I reply. I had hoped it would just be behind the counter and I’d pick it up from the espresso shop.

“You need to take a taxi to the station.” He says. He reaches into his pocket and fishes out 70 Kuna (about $10USD). He gives me the money. I look at him blankly. What am I supposed to do with this?

“Do you know where the taxi station is?” He asks.

“I will take you to the taxi.” He promises. I can only stare. I have no way to contact Jackson who is waiting in a parking lot with the car. I can only hope the police station is close.

I follow the young man who has “Gentile” written on the back of his teal shirt. At the Taxi station he waves over a driver and explains everything in Croatian. I understand nothing, only stand there holding the 70 Kuna Mr. Gentile had given me.

Mr. Gentile tells me to give the taxi driver the money. “He will take you.” Mr. Gentile assures me and walks away.

“THANK YOU!” I call out, before getting into the taxi.

The taxi driver, who tells me his name is Bruno, drives me the ten minutes to the police station. He was really nice with a soft face and large hands.

“You lose your phone?” He asks.

“It happens to everyone.” He assures me.

He pulls up to the station and walks with me up to the entrance. “I will tell them.” Bruno says and proceeds to tell the cops about my lost phone in Croatian.

I’m getting a little nervous at this point: I’ve been gone about 30min and have no ID, no way to contact Jackson and I don’t know where I am. I hope the cops don’t give me grief for not having a way to prove who I am….

Bruno waves me over. “They will help you. I will wait downstairs for you.” And then disappears.

The cops ask me what color the phone is.

They pull it out. I type in the pass code: voila!

“Ok.” The cops say. “It is yours! Please sign this really ghetto looking piece of paper that looks like it will be thrown out next week with the recycling.” (They didn’t really say that but, like, I thought that’s what it all looked like.)

Then they asked me for an ID. Shit.

“Uhh. I don’t have my passport with me.” I say, expecting some bullshit. I trip downstairs to Bruno who’s sipping an espresso. He looks surprised. “That was fast!” He says. “Come, let’s go back.”

In the 10-minute ride back to the downtown taxi station, Bruno tells me about his life. I tell him how much I fucking love Croatia. He agrees whole-heartedly.

“They say when God made the earth and gave the countries their land, he had a little bit he saved for himself that he didn’t know what to do with; with this, he made Croatia.” Bruno explained.

I chuckled. Yeah, I can see that.

I walk back to Jackson who is having a cow at this point. I’ve been gone 40min and no word.

“Yeah. You wouldn’t believe what just happened.” I say.