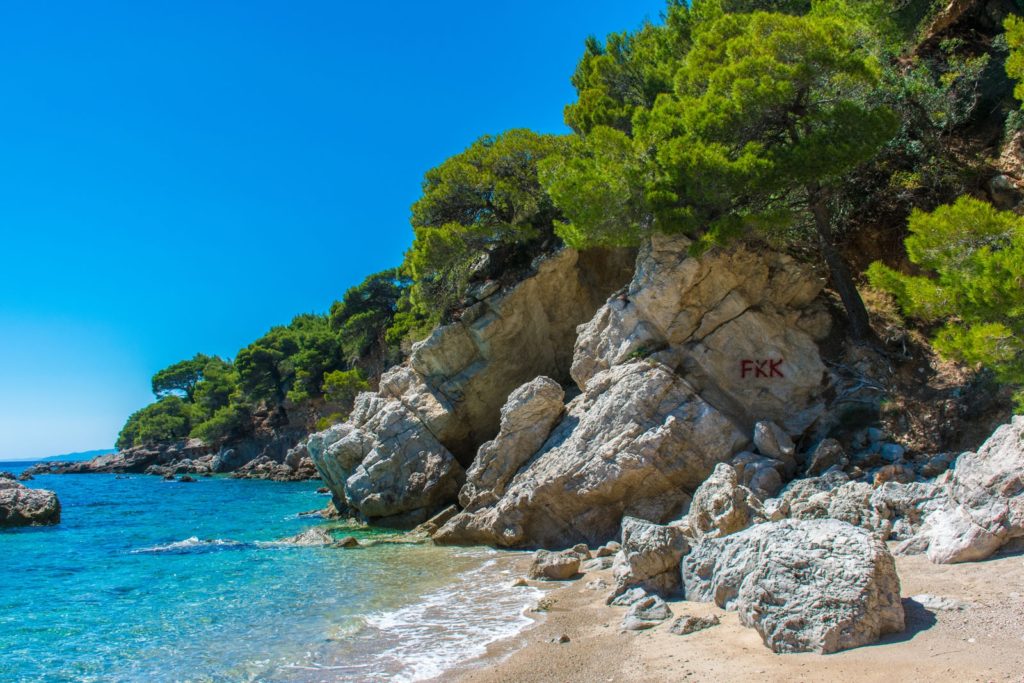 Croatia nude beaches are some of the prettiest beaches we’ve seen on our travels and can also offer the best tan you’ll ever get.

We spent a little over 2 weeks in Croatia in May 2017 and during our visit we searched for and found beautiful beaches. Although we didn’t expect to be nude the entire time we were on a beach, it so happened that this way of enjoying the sun and surf felt the most comfortable and natural for us (and our tans were the BEST they’ve ever been!). We’ve put together some of our favorite Croatia nude beaches from when we were there.

Before we begin: If this is going to be your first foray into outdoor nudity, don’t forget sunscreen! Some of your skin is going to be introduced to the sun for the first time, and it will burn if you’re not careful. Our personal favorite sunscreen brand is Banana Boat. This spray on stuff is by far the most convenient (and when it comes to sunscreen, convenience is what will keep you reapplying as much as you should), but the regular stuff is great as well.

Without further ado, here are our top 5 Croatia nude beaches (in no particular order)…

This was the first of our Croatia nude beaches, on the coast just north of Crikvenica. After wandering around the park a little we found stairs that led down to the beach. This beach was gorgeous: cool, clear water and we had it to ourselves for an hour before anyone else showed up. People from the top of the park could look down and see you naked if they felt to, so be aware that you could be a little on display.  (There were three sets of stairs, that we saw, which lead down to the water. Each one had the letters FKK painted on the ground, so you’ll have a little bit of choice! We later found some of these details here. – Jackson)

The Northern Edge of Cove Debeljak in Kamenjak i medulinski park

The drive out to this beach took a while, but it was really nice. The northern edge of the small bay was where all the FKKers went. The way the beach naturally formed gives small, secluded entrances to the water and divides the beach into 2-4 person capacity sections. This made the beach feel more personal and private than the previous beach.

You can still see people across the water on the other side who are not nude, but it wasn’t too bad. (The bay is a delight to swim in. I swam from one side to the other, and back! – Jackson)

For more information about what we did in Istria, a beautiful area of Croatia, you can read more here. While we didn’t try out the naturist cruise pictured above, it does sound highly relaxing! It’s also interesting to know, that the cruise passes by these next two beaches. Being such a beautiful part of the country, we can’t really blame them! If you love a good cruise, it might be worth checking them out!

We LOVED this beach. Stopping in Brela on the coast is already a jaw-dropper and this beach, about a 20min drive from Brela and another 10min walk was private and beautiful. We stayed here for hours and only saw a few people. There are several little coves that all branch off a main path, so you will occasionally get people walking the path right above you.

To get there, follow the road along the coast through Jakiruša. At some point you’ll reach the end of the paved road. There are a few parking spots right here, or you can keep on down the dirt road, and you’ll eventually come to a rough parking lot, where the dirt road turns into a bicycle path.

From there, you’ll pick your way down some pretty well marked dirt paths, as you climb down the cliff towards the water. Doing this, there is a large beach to the left, or you can continue to the right, where there are many small natural coves, each of which is only large enough for a few people.

(There was only a little info on this beach online, and some reports indicated that it was impossible to reach unless you used a boat. We found the best info here. – Jackson)

Easily the best beach on our trip. Taking the time to go out onto the peninsula not only got us off the beaten track, but gave us a private beach that was all our own FOR THE WHOLE DAY. We saw no one. You’ll find many wild Croatia nude beaches like this one, if you keep and ear and an eye out.

Getting there: As you drive along the road (away from Zulijana) above the beach keep an eye out for a steep dirt road on your left. Immediately past this are a few spots you can pull over and park. From there, walk down the dirt road, until you see a small goat path leading towards the cliffs. You’ll have to pick your way down some relatively steep paths, but if you keep an eye out, the way will be obvious.

This was the most exposed of the Croatia nude beaches we went to. Tourist boats would sail past as we baked on the rocks and we really felt like we were on display. The cool thing about this beach is its proximity to Dubrovnik and the views. The rocks you can sun bathe on look out over spectacular coast lines and by taking a boat to Lokrum island you can beat the worst of the tourist crowds. There were also ladders with which you could climb into the water, though the day we were there, the sea was pretty rough, so we stuck to sunbathing.

Here’s a handy google map of the Croatia Nude Beaches we visited in this post!

Here’s a couple of things to note:

If you are ever curious about learning more about nudist beach etiquette, you can read our 11 tips for how to behave on a nudist beach here. 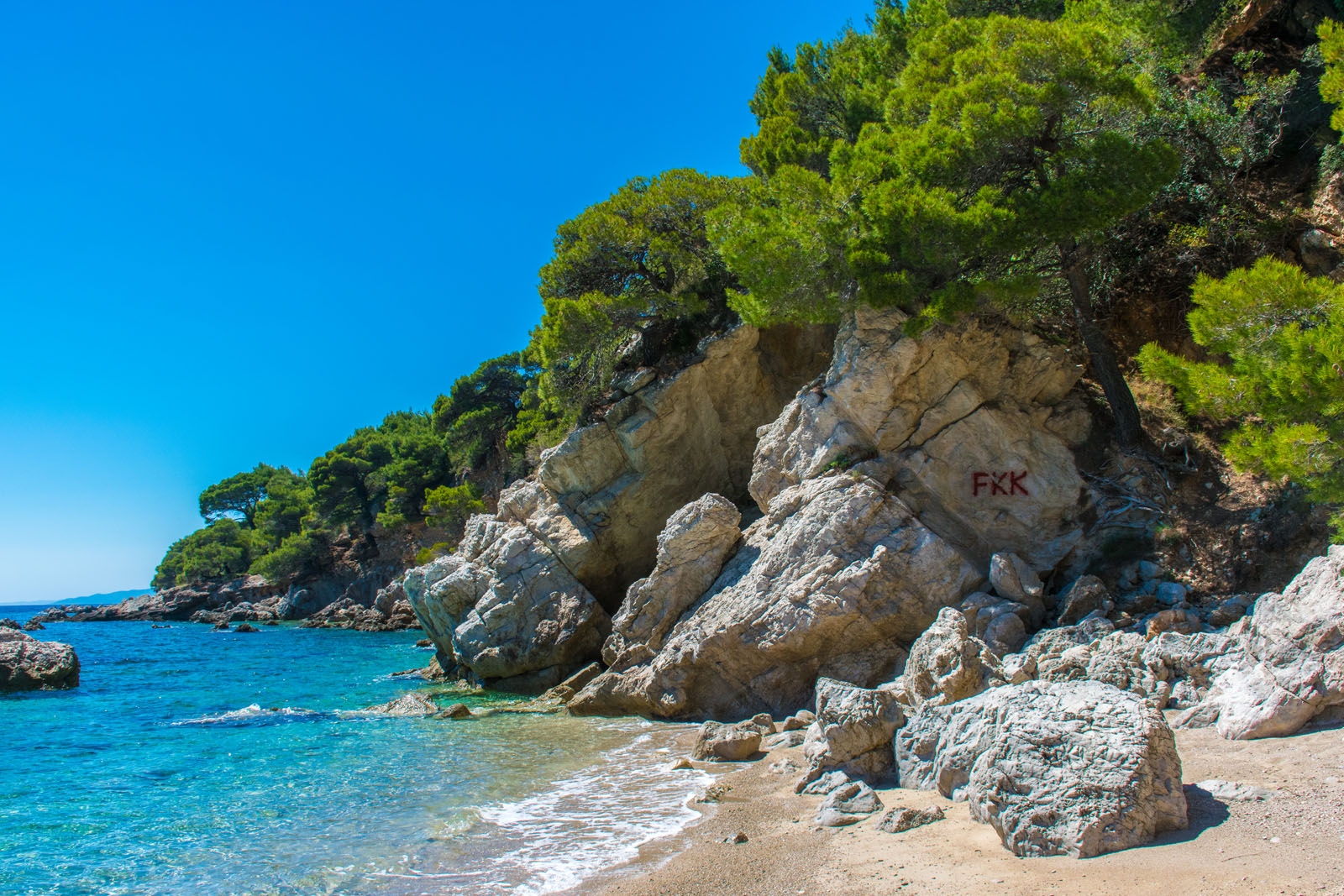 Article Name
Croatia Nude Beaches (Our Favorites)
Description
Croatia nude beaches are some of the prettiest beaches we've seen on our travels and can also offer the best tan you'll ever get.
Author
Natalie Allen
Publisher Name
A Pair of Travel Pants
Publisher Logo