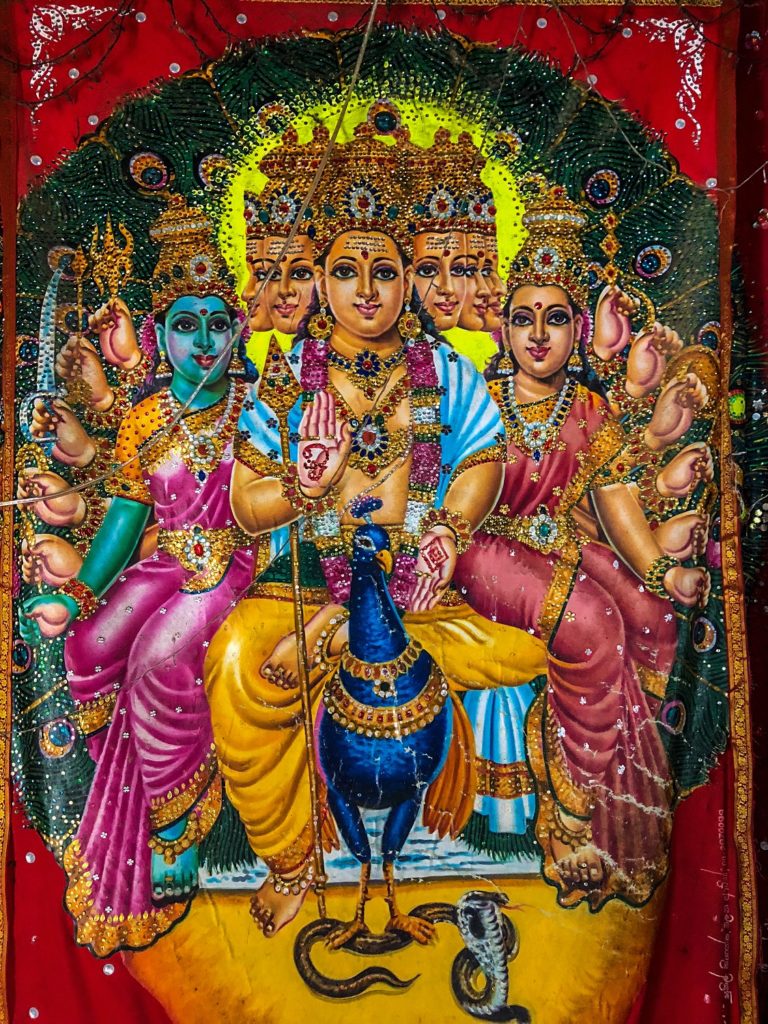 We went back to Kandy because it’s such a good central point for jumping into the rest of Sri Lanka.

We decided to give Kandy one day to see some of the stuff we’d missed the last time we came through. Rather than going into the center of town like last time, we opted to stay outside at a home stay we found on AirBnB.

Our hosts at the AirBnB we were staying in gave us a list of suggestions of places we could go, including some of the places we’d been last time. (So many Sri Lankans seem absolutely floored by the fact that we are back for a second visit. Then, they promptly suggest that we go and do all the same things we’d previously done. Trying to suss out new places to see is a little frustrating for this reason!).

We hired a tuk-tuk to take us out to Embekka Dewalya Temple, boasting 750-year-old wood carvings and a chance to see more of the countryside. The drive did not disappoint! We drove past rice paddies and small farms in the backwaters of Kandy. It was idyllic and beautiful and felt a little forbidden, as if we were traipsing into someone’s private estates.

The temple was a small one and when we pulled up, the driver turned to us and said he’d wait. 30 minutes? We were hesitant, would there be other drivers here? Unlikely. In fact, when we pulled up we were the only visitors. Looks like we’d need to fork over another 1,000LKR (about 7.5 USD) for the 25min ride back.

For the price of $2USD per person, we took our shoes off and went inside for a look.

The temple was quiet and old. It was small, too. The bodhi tree in the courtyard spread out its massive limbs and took up a good chunk of the space. We wandered the pillars of carved wood and spoke in whispers.

Felt like the kind of place where using your full voice would be inappropriate. Near the back was a room devoted to the local god. It was a small room with painted ceilings and walls depicting bodhisattvas and buddhas in yellow.

It felt like such a precious little space and I felt so large being inside of it. As I left I whispered a “thank you” to whomever was listening.

Our next stop was the Royal Botanical Gardens. The admission was 1,500LKR ($10USD) each. The guides said that we’d need about 2-3 hours. We took 5.

This place was amazing! It was clean, quiet, there were lots of plants and trees! There was even a really cool display of different types of grass from around the world, which I loved.

We walked all over and eventually came to the green in the center for a cat nap under a tree. The air temperature is a lot cooler in Kandy than it is in Colombo, so it felt really good to be outside and not choking on fumes and humidity.

This trip was really different from the last visit. It felt far more relaxed and at a slower pace. This is probably due to having been here before and not being so slammed by the new experiences. That said, however, by this point we were still suffering mightily from some of the worst jetlag I have ever had! Once 8pm came around I could not keep my eyes open! Then, around 3:30am I’d spring awake in bed. It was a vicious cycle.

Our homestay host also made us a delicious meal. It was some of the best dhal curry I’ve had in Sri Lanka.

Pro Tip: Staying at a home stay can be really great because you get all sorts of home-cooked meals to sample for reasonable prices. Plus, you don’t have to do any dishes or go anywhere.