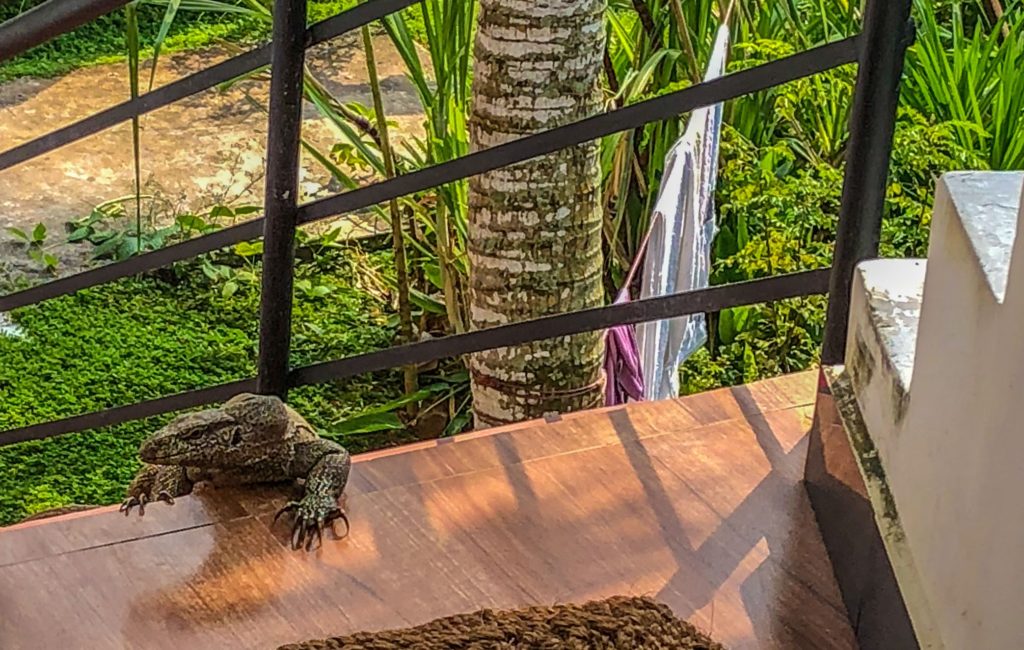 It was 1:30am and Jackson wakes me up with a start. I crack my eyes open to see something black flying over the edge of the bed.

“What was that?” I mumble. Too tired to consider it anything serious.

Jackson, immediately alert, says: “Something just crawled across my face.”

“What was it?” Reading something wrong in his voice.

“I’m not sure.” He answers, tensing as he looks around his pillow and the edge of the bed.

“Anyway, I think it’s gone.” Jackson says, lying back on his pillow. I lie back on mine and wait for sleep to come. A few minutes later Jackson jerks upright again.

“It’s back!” He says, leaping off the bed and going for the light switch.

Nothing on this planet gives me the heeby-geebies quicker than the thought of a roach crawling across me.

“WHAT THE FUCK! WAS IT CRAWLING ON YOUR FACE!?”

“Yeah, I could feel it near my mouth when I woke up.”

There was a cold pause.

“Where is it now, Jackson?”

I shot out of bed. Mosquito net be damned! I didn’t want to be near the bed.

Jackson grabbed his phone and a shoe and went to work, carefully checking the bed for any movement. I stood on a small patch of rug (no chairs in the room otherwise I would have stood on that and squealed).

“We need to move the mattress.” He said.

We did. Ripping the thing off the bed posts and sliding it across the room.

Jackson started hitting the bed with his shoe, coaxing the Demon Spawn out with his thumps.

Then: like a horror movie, I could see antenna, frantic little legs and a black, beady head stick itself out of the wooden slats of the bed. I slapped my hand over my mouth to keep from shrieking. It was big.

Jackson, waiting like a trained hunter in the jungles of lore, slowly raised his shoe for the death blow. He had to be quick and he had to be accurate, because if he missed that Hell-Splinter would crawl back under the bed.

His strike was sure and true. I tossed him a napkin and he took the extra measure to make sure there was no roach second-life by crunching it again and then tossing it in the garbage.

After putting the room back together we lay on the bed in silence.

“Jackson? Remember that HUGE iguana we saw today walking across the balcony to its hidey-hole in the roof?”

I slapped at a mosquito which had just landed on the inside of the net. “That roach was way worse.”

“I can’t believe it crawled on my face; I don’t think I’ll be able to sleep for a while.”

The next morning, our host, Harrison, asked us how we slept.

“Fine.” We lied. How could we tell him about the nightmare of the night before? What could be done about it? We did, however, leave the carcass “butter side up” in the trash bin so that whomever cleaned the room would see that there had been a just murder of evil.

Jackson and I had the unfortunate luck of getting a cold. Thankfully, we got a cold at the same time so we could sniffle and sneeze together. This also meant that there was no energy for going to the beach, exploring, or doing anything more than reading a book on the balcony that overlooked the gardens of the home stay.

Harrison, a balding retiree from the air force, was a very nice, but very strange host. Throughout our stay he would show us every piece of paperwork he had about himself, right down to how much his pension was a month from the government. He’d also pop up randomly throughout the day to the balcony we were sitting on, one time coming up to us with a battery powered keyboard and playing (and singing) us a couple of Sri Lankan songs with his index finger before standing up and walking away, leaving the keyboard and no explanation.

“I am your Sri Lankan Father!” He’d proudly state at dinner, as his wife, Indra, set the table. Sri Lankans, as a whole, are quite formal. Guests will sit at the dinner table and eat and the hosts will not join them, but instead hover around the diners in case anything is needed. It’s really disconcerting when you are trying to eat dinner, but the person who’s house you are in is standing over you and watching while you eat. Not Harrison, he’d pull out a book filled with declarative statements translated from Sinhalese and shout “You are my daughter and son! I will never lie to you! I will never cheat you! Your happiness is my happiness!”

Jackson and I would sit in bemused silence, nodding and chewing.

“Harrison? Did you know there is an iguana that lives in your roof?”