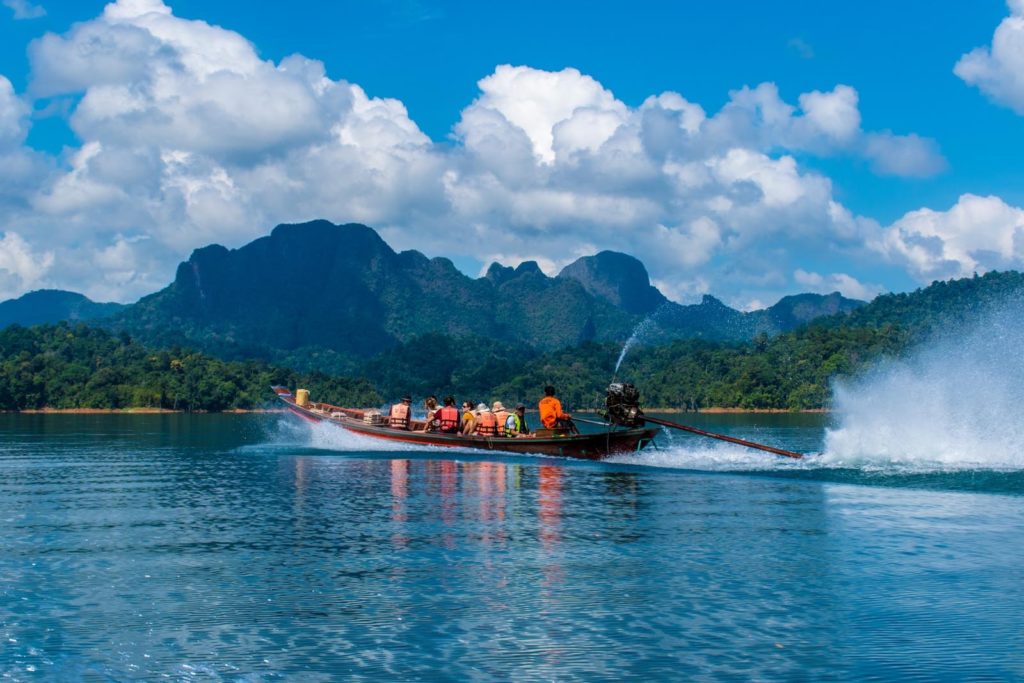 We’d never considered visiting Khao Sok before, but after seeing some gorgeous pictures on instagram, learning we could go hiking in Khao Sok and how easy it would be to go exploring Khao sok, we knew we needed to go South and check this park out. 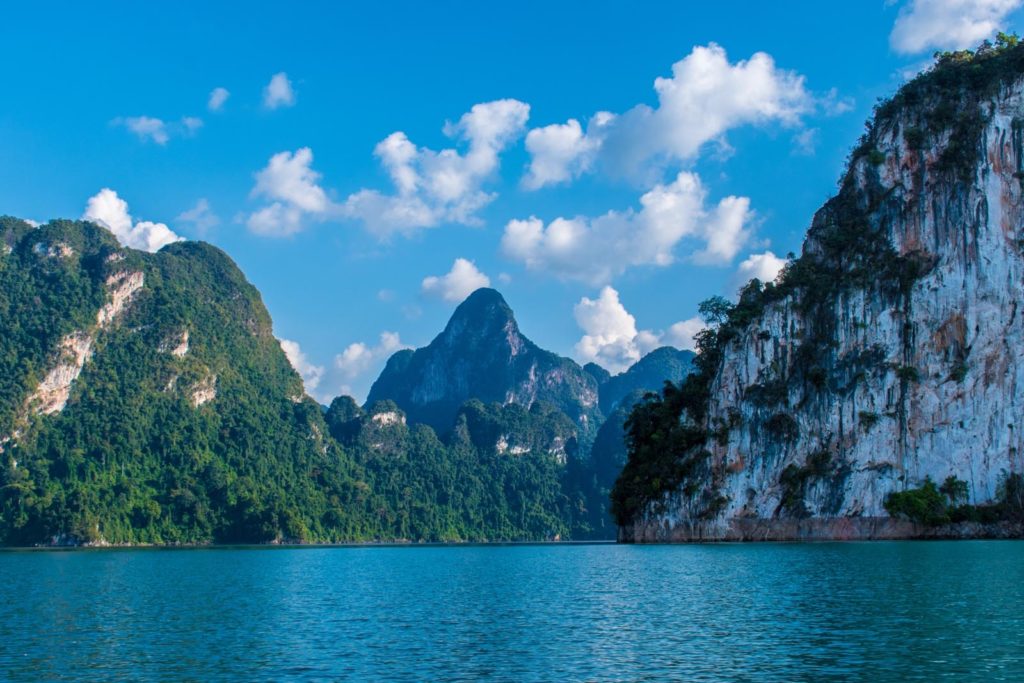 We went South on this 2nd visit to Thailand because we’d spent last year gallivanting in the North (hiking up the monstrous Phu Kradueng Trek). Figuring we’d see another National Park, Jackson thought 2 days in Khao Sok would be a likely place to get in a good hike, see some nature, and maybe eat some yummy food along the way.

Thailand can be really crowded with tourists and we knew we’d really be in for it since we were staying on Koh Lanta – a beautiful island whose secret is well and truly out – a few days after our 2 days in Khao Sok.

Khao Sok appealed to us because we wanted to see some of the natural beauty of Thailand, go off the beaten track a little, and get in a hike. Plus, we knew we could catch a hella’ cheap flight out of Krabi to Singapore so we really felt like we were winning.

Khao Sok is located above Phuket, about a 5-hour drive, and sits in the mountains. It’s famous for its dam, the Ratchaphrapa Dam which is the largest in South East Asia.

The Dam was built in 1982 and was constructed as a way to generate hydroelectric energy for the region. The subsequent 64 sq. mile (165 sq. kilometer) lake that formed flooded the valleys of the park and created a vast watery wonderland that makes exploring Khao Sok so iconic.

What to do in Khao Sok:

Jackson and I signed up for a full-day excursion, which included:

…all at our hotel. Unfortunately, you are required to book a pass onto the lake because you have to rent a boat to get around and a guide to take you around the park. Exploring Khao Sok is ok if you just want to hike around, but if you want to spend time visiting Khao Sok’s lake, you need to pay up.

For the full day of exploring Khao Sok, we paid 1,500 Bhat ($50USD) each for the excursion. It was an expensive day, but SO WORTH IT.

The town outside the National Park is small and sleepy.

If you are like us and arrived with an extra day to kill before you mega-excursion into the park, you might want to think about exploring Khao Sok’s little street and taking in a small Thai town.

Exploring and Hiking in Khao Sok:

This boat ride was incredible. The mountains jut out of the water like Dr. Seuss pictures. They’re jagged, crooked, like the spines of ancient dragons now covered in green.

I was reminded of our 4-day Milford Trek in New Zealand. There was a “land before time” quality to the views. The boat ride took 1 hour 20 min to get to the small port at the end of one of the fingers of the lake. As we approached, little huts floated on the water and we observed people jumping off the pier and splashing around.

After a lunch of fish and curry (yummy!) our group of 10.5 (we had a 3-year-old coming with us on her daddy’s back!) set off to go exploring Khao Sok to a motherfucking massive cave!

The trek was awesome. There were rivers, mud patches, massive trees, monkeys, leeches (thankfully we didn’t get any biting us although others were not so lucky…), birds, vines, and finally: the entrance to the Nam Talu cave.

Nam Talu translates to “water through it” and it is a very accurate description of this 800+ meter (.5 mile) cave. What sets this apart from other caves I’ve explored is that it has an entrance and exit so you don’t have to turn around and go out the way you came in.

Following the river that has cut through the rock over eons, you can make your way through the pitch dark to the other side of the mountain and then hike back to the beginning of the trek.

Which is exactly what we did.

The cave was massive: at some points opening up into large halls where the floor was covered in nasty looking crickets, huge spiders, and crabs. Then, glancing up at the ceiling with the flashlight on your head, we’d see thousands and thousands of bats hanging. Exploring Khao Sok in this cave was easily the highlight of the trip!!

The river was cool, but not cold, and flowed over rocks and boulders, looping around massive stalagmites (one of which looked like a huge turtle as our guide pointed out!). We stumbled and cursed our way through the bowels of the mountain, at one point turning off our lights to get an idea of how dark the cave was (it was super dark! Like, couldn’t tell if my eyes were open or closed).

This was before the 12 boys got trapped in a cave in Northern Thailand a few months later. After experiencing only a very brief moment in utter darkness in the cave I can’t imagine what those boys must have gone through. I was panicky just from the couple seconds we were without light. I can’t imagine days on end in there…

Our guide, a really jovial Thai named Two, would whistle and sing as he led us while we were visiting Khao Sok, coaxing us onward with promises of getting soaked near the end. “You see!” he’d croon. “Water up to your chest!”

I prayed my sandals wouldn’t break as each step seemed to test their endurance by flipping the soles and twisting the straps (thank you, Columbia sportwear!! They held!!). Please be sure to bring the right gear on this hike! The stones are sharp, the mud is slippery, and it’s going to be hot and humid when you go visiting Khao Sok.

As we neared the end of the cave, Two took off his shirt and with a massive grin told us that the time had come to take a dip. Here, the water went from knee and ankle deep to chest and shoulders and we each scooted our way over rocks into the cool river.

This was my favorite part! The cave closed in on us and at some points the opening to get through was only a foot or two wide. The daddy with the daughter managed to limbo through (although he was the size of a bean pole) if he could do it with a three-year-old then we could do it!

Something to remember when visiting Khao Sok: The Thai will often not tell you the dangers and hazards you are about to sign up for. If you are not very physically fit or overweight, the guides will NOT let you on this hike. Of course, they’ll tell you after you’ve bought your tickets. Be careful.

Two cackled like a madman tripping over the walls and stones like spiderman as we lumbered and splashed our way through the river. (How did he manage to do those moves!?).

After the muddy hike back (and by this point it was MUDDY- so many tourists had shown up and were splashing through the rivers and tracking the water into the soil) Jackson and I took a dip in the lake which was surprisingly warm, like bathwater!

This was a seriously fun day.

The hike to the cave took about an hour, inside the cave took another hour and then the same hike back. All told, you’re on your feet for 3+ hours of strenuous, slippery hiking in Khao Sok.

What to bring if you are visiting Khao Sok:

We were shocked to see some people walking this hike barefooted. This struck us as a BAD idea because it is so slippery and at some points really sharp and jagged.

Also: one daddy was holding a little kid in both hands while hiking barefoot and one of the Thai guides was like: “Bro, that’s super dangerous, you could drop the kid and yourself in a nasty fall.” and the tourist ignored him. (Ugh. People are so dumb.)

Nam Talu cave is not normally open during the monsoon. Two was getting a bit concerned about rain on the walk (it didn’t rain at all, thankfully) because if it did rain, the river would flood and we all could drown in a flash flood. So, like, don’t go during the rainy season.

Do NOT go during the rainy season. Like I said above: rain in this area could cause the cave to flood and that never goes well.

The rainy season in Thailand lasts from May to October.

The Hot season (when temperatures can get really sticky, too) lasts from February to May (April is the hottest month!)

The “Cooler” season (can Thailand really get cool, I ask you?) is from November to February.

You can read more about the seasons and temperatures in Thailand here.

Hiking in Khao Sok was a really fun day. 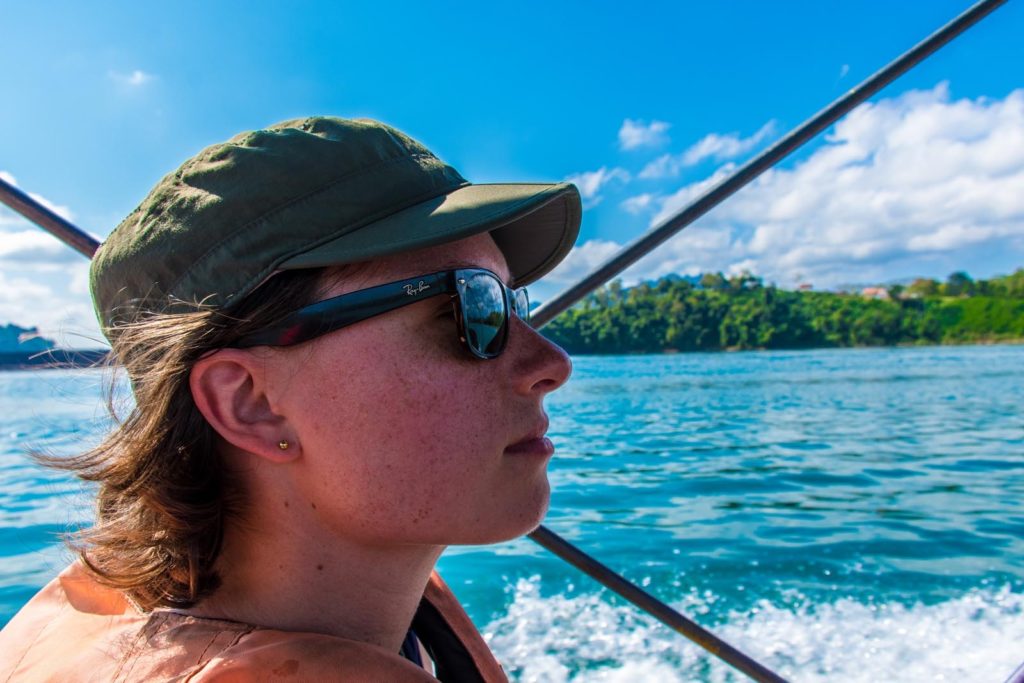 I’d caution against going without adequate sun protection because you’ll be on a small motorboat for at least 2 hours getting to the shacks in the middle of the lake and back.

They will feed you at the houses, but we brought a snack just in case because everything we did was pretty strenuous.

Your hotel should be able to book an excursion for you.

2 days in Khao Sok was plenty of time to see the little town and then go on our big day. I think, had we spent longer, we would have gotten bored. It was BALLS hot when we were there so hiking in Khao Sok wasn’t too appealing if we were going to do it on our own. Nomadic Matt has a great story about hiking in Khao Sok if you’d like to know about his experience.

We love hiking, just not in steamy temperatures like that time we did a hike in Fiji. Yikes. So splashing through rivers and jumping into the lake at the end was delightful. This was a great park to visit and 2 days in Khao Sok was just enough. Highly recommend it!

Have you gone on a great hike? Where did you go? Let us know in the comments!