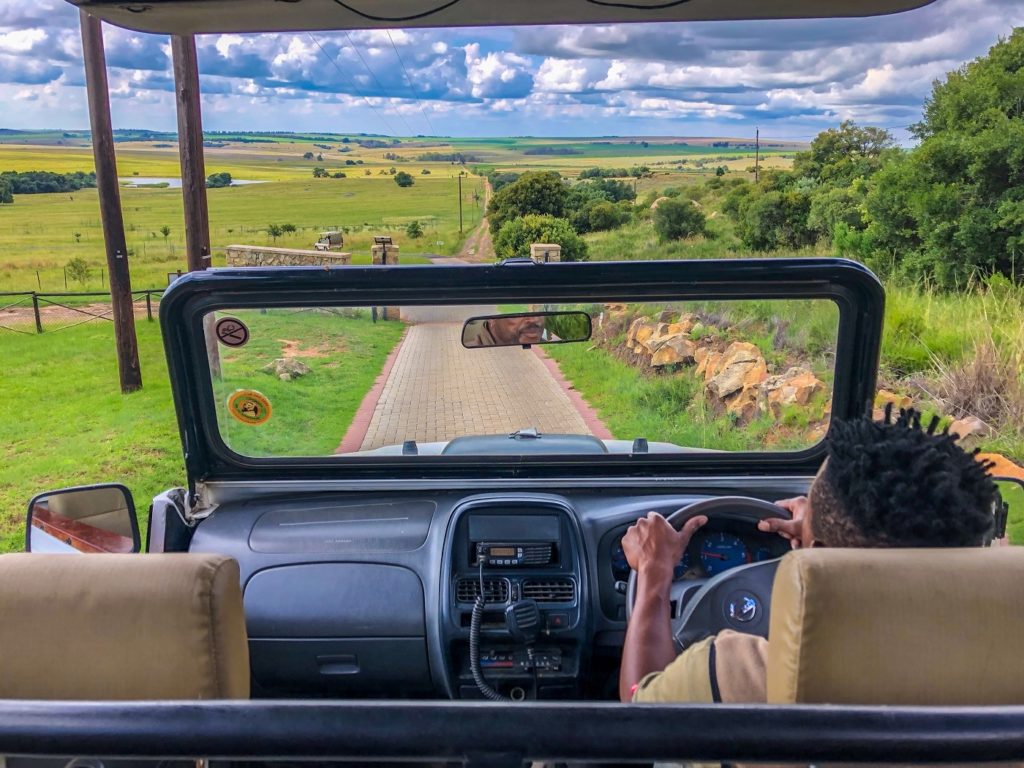 3 hours outside Johannesburg and our little white Ford was bumping over a very gravely dirt road on its way toward Lionsrock Big Cat Sanctuary: an animal sanctuary in Africa.

Our friend Jen had found this place online. It’s an animal sanctuary in Africa which serves as a recovery center for big cats from around the world who have been rescued from war zones or terrible living conditions. We’re talking lions and tigers and leopards who were saved from Aleppo, Syria, Mosul, Iraq and Russian beach spas.

The lodge for visitors sits on a slope overlooking grasslands that spread out like a green patchwork quilt into the distance. The sky is low here as the elevation is pretty high (about 5,300 ft./ 1,630m), which also causes the temperature to be lower.

Where is Lionsrock Big Cat Sanctuary?

Lionsrock big cat sanctuary is about 3 hours from Jo’burg, a relatively easy drive south toward Lesotho that you can make in a 2×4 car. If you are unsure about driving in South Africa, we have more information on that.

Finding this place wasn’t too difficult as there are signs on the roads. The dirt road to get there was a bit bumpy, but not too bad.

The drive to the lodge is lovely once you enter the sanctuary grounds. Springbok, antelopes and wildebeests graze on the plains as you drive over the small one-lane road. We gawked at their large horns and white faces. These are animals I grew up looking at at the Natural History Museum in New York City, except these are not glassy-eyed, stuffed creatures: they’re living breathing African vegetarians!

The lodge is lovely and very comfortable. We managed to snag a room for about $50/night on booking.com. It’s a great place to stay because all profits from the lodge go toward saving and rehabilitating the animals. For 250 Rand (about $20USD) each we went on a guided tour of the grounds, getting glimpses of the tigers and lions and leopards.

The lodge is open year-round, but can get really cold in the winter (June-September). The employees recommended coming in the summer.

Going on a Tour of the Grounds

Tours of the grounds are offered several times a day, everyday. Although they feed the animals on Tuesdays and Thursdays which is the best time to go because the animals will come out and you can see them more easily.

The tour was really sobering. The majority of these creatures have been through a lot of hardship. Our guide explained how one lion had lived his entire life in a cage and at the age of 15 was sent here and felt grass for the first time (lions generally have a life expectancy of 15 years!). This makes the work this animal sanctuary in Africa is doing so important.

We learned about “Canned Lions” which is basically a set up for hunters who want to shoot a lion. Amateur hunters will pay to shoot a lion in an enclosed space and then take a picture with it. Apparently, thousands of lions are bred for this purpose a year. It was so sad to think of lions being herded into an enclosure where they have nowhere to hide and then are shot to death. Four Paws, the charity organization that works with Lionsrock big cat sanctuary, is working very hard to make this practice illegal in South Africa (the only African nation where this is legal).

The cats we saw looked healthy and content. I was especially impressed by how large the Bengali tigers were: MASSIVE! We were lucky because we showed up on a feeding day (Tuesday) so we could see the animals eating and staying relatively still for us to take some pictures (Jackson has posted his safari photos!). The people who work here really good care about the mission of an animal sanctuary in Africa.

I would highly recommend staying at the Lionsrock big cat sanctuary if you come to this part of the world. Lionsrock and Four Paws are doing some incredible good for the animal world and making a lot of efforts to save animals who can’t save themselves.

There are also sanctuaries in Germany for bears! (I’d like to see that, sounds super cool!). The staff working here are incredibly friendly and helpful. The lodge is comfortable and boasts an outdoor pool. All proceeds help with the recovery and maintenance efforts of this animal sanctuary in Africa.

Plus: on the morning we left, the lions were roaring and roaring! It was quite the cacophony of sounds to wake up to. Incredible.


This was our first stop on our road trip across South Africa in early 2018. I think eco-tourism is welcomed at Lionsrock big cat sanctuary, which they feel is really important. Staying here is a great combination of helping a local company out that is trying to do the right thing and getting a chance to view wildlife. It’s all a win-win!

South Africa is such a lovely country and can have a bad reputation. For a chance to get out of the big cities and see something really special, I couldn’t recommend this place enough. I’ve answered a couple of FAQs here if you’d like to know more about our trip to South Africa.

But as for the Lionsrock Big Cat Sanctuary: I would definitely come back. I’d recommend 2 nights here. We spent 1 and that was fine, too. This was a lovely experience.

Have you ever been to animal sanctuary in Africa or around the world? What were your experiences like?