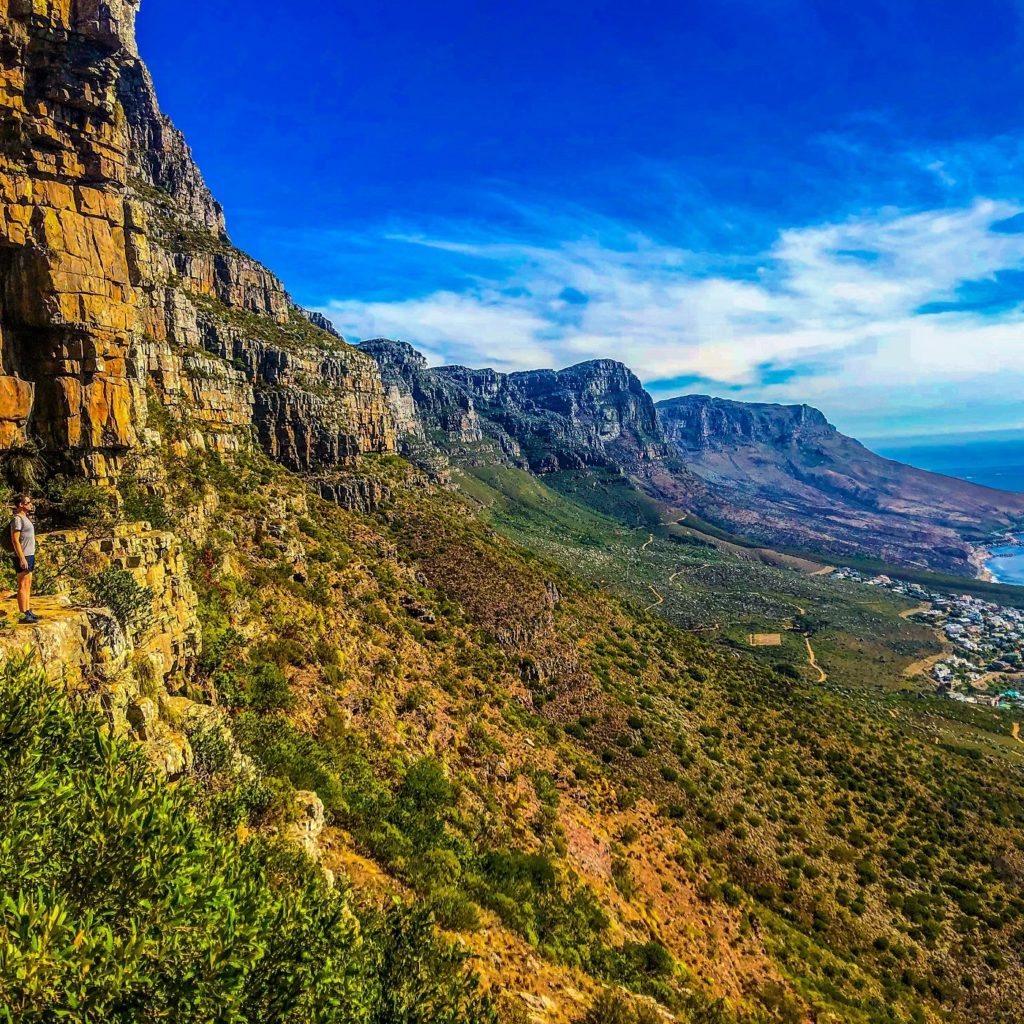 We’ve been getting a lot of questions about South Africa and thought to do a general FAQ post. If you have any other South Africa questions feel free to ask and we’ll add them to the list!

What Was It Like Being in Cape Town During the Drought?

I was really taken aback at how nonchalant everyone was about the worst drought in recorded history (and that the ominous “Day Zero” is only a few months away!) no one seemed too concerned from what we could tell. That being said, there was a lot of signage up pleading with the visitors and locals alike to use less than 50 Liters a day. Jackson and I tried very hard to adhere to that. We took very short showers where we’d turn off the taps to rub down with soap and then turn them on again to wash off. The water that came out during the shower we would collect in a bin and then wash our dirty laundry in it. THEN we would save that water and flush the toilets. Talk about austerity measures! (I kinda’ liked saving water, to be honest, made me feel like I use way to much normally).

Cape Town’s bar and restaurant scene had a lot of “out of order” signs on the bathrooms. Apparently, the government would fine a business if it was using more than their fair share of water so the restaurant would just close the bathrooms to cut back on the public use. We needed to plan accordingly and pee before we left our room.

Driving around the Western Cape, we could see a lot of very dry looking places, and then we’d pull in and the locals would proudly state that they were not experiencing a drought! It was really strange. Everyone and their Mother had a bore-hole and was fishing water out from deep underground. I can’t say that the water tasted very good, very metallic and chemically. Yucky, in my opinion. But I found myself baffled most of the time we were not in Cape Town: where was all this underground water coming from and was it endless? My guess would be that it is not.

At first we were a little worried about car jacking and something getting stolen because we had read online that that was a distinct possibility. We didn’t leave anything in our car when we parked in on the street! We always locked the doors. Otherwise: we didn’t feel too worried. South Africa’s tourism is thriving and there is no shortage of people from abroad and therefore: safety in numbers? Plus, people we met were really nice and would tell us where to go that was safe; we didn’t go anywhere that felt creepy or weird. Outside the major cities the towns were sleepy and quiet.

How Has the Recent Change in Presidents Affected South Africa?

The locals seemed really excited to have a new president. The last guy, Zuma, was deeply disliked and embroiled in a range of scandals. Once he stepped down the Rand rose in value and people seemed a lot more hopeful about the future.

Are the Roads in South Africa Good?

Overall: Yes! There were some roads that had potholes, so we drove a little slower around those, but the main highways were well kept and clean! It’s really common to see people picking up trash along the side of the highway. We were impressed with the whole operation: so much cleaner than The States!

There are some smaller side roads in the countryside and mountains that really turn into gravel and dirt. Those roads were a bit hair-raising in a 2-wheeler, but otherwise everywhere we drove was comfortable for the most part. We did get a nail in a tire in Cape Town, so even in the “better kept” areas, you’ll likely need to get a tire replaced. Make sure you have insurance!

About $5 a gallon. They measure their gas in liters and describe it using the word “Petrol” (like they do in most of the world outside of The US!). The gas stations are amazing experiences. You don’t pump your own gas: they do. The attendants will also clean your windshield, pump air into your tires, and check your engine oil if you ask them! This is all “free” but it is really nice if you tip them after all is said and done.

Do They Speak English in South Africa?

Yes. And Afrikaans as well as local dialects and languages. But, they super-duper speak English.

It’s still summer so it was warm or hot. It was very sunny, too. Although as we drove through the Free State and Eastern Cape we came across a lot of summer thunderstorms. For the most part, it was quite dry.

Are There a Lot of Tourists in South Africa?

I don’t know the exact number, but when we were tooling around we would often be alone or sharing the experience with only a handful of other tourists. I didn’t feel like there were many tourists at all until we got to Cape Town and saw more, but even then it wasn’t too crowded or anything.

Awesome. Seriously spectacular hiking here. There’re stunning vistas, amazing diversity and the weather is great. I would HIGHLY recommend hiking as much as you can while here. There are so many hikes you can do! We did the Striptease Hike which was wonderful.

Although not South East Asia prices, it is quite affordable. You’ll probably pay about $25-30USD a night for an AirBnB, $5-15USD for lunch and $10-20USD for dinner at restaurants. Food prices at grocery stores are pretty cheap if you want to cook for yourself. Alcohol is cheap, too. A bottle of good, cheap wine will run about $3-5USD.

Do I Need to Tip?

We’ve been tipping about 10% at gas stations and restaurants.

What’s the Money in South Africa?

The Rand. At the time of writing this, it is 12 Rand to 1 USD. To put that into perspective: you can buy a cocktail in Cape Town for about 70R, a burger for about 130R and a tank of gas for 450R. Generally, South Africa is pretty affordable for Americans and the USD will get you some sweet stuff. (Like: ALL the delicious South African wine!!).

Is the Wine Good?

Oh man. So. Good. So cheap! We would buy a bottle for about 30R  (little less than $3USD) and have a delicious table wine. We went to the wine country outside Cape Town and went to town on the vineyards out there. Couldn’t believe how cheap everything was! Winning!

If you like cities and day trips: go to Cape Town and explore around there. You can spend about 10 days there easily tooling around the region if you rent a car.

If you like hiking I would HIGHLY recommend going.

If you want to drink your bodyweight in wine, I would also highly recommend going.

If you want to veg out on a beach: go to Thailand. This isn’t for you. (Beaches are cold!!).