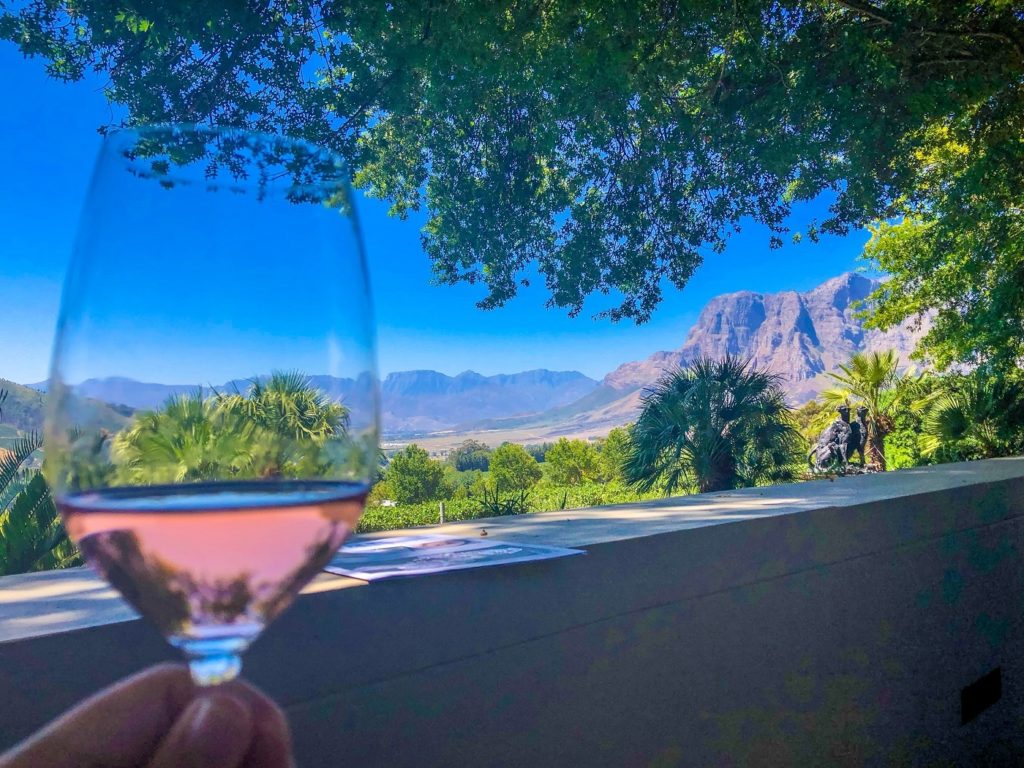 Leaving Cape Town, we decided to venture into the South Africa wine region of the Western Cape, giving us a chance to taste and savor as many South African wines we could get our hands on.

The last time I was on a real wine tasting tour, I was about 16 and tagging along in a limo with my parents and extended family in California, watching curiously as the adults around me got drunker and drunker. I remember marveling at their ability to sip horrid tasting whites and reds (at least, to my teenage brain they were unappealing!) and bounce from vineyard to vineyard to do it all over again.

Flash forward 15 years and now I’m chomping at the bit to get my lips around a glass rim: tipping cool bubbly, flavorful whites, and rich reds down my throat (plus, throw a little brandy in there and I’m golden). I guess this is further proof that youth is wasted on the young. At 16 I probably could have hit 10 vineyards and woken up the next morning ready to run a 10k. No more now…

Jackson found us a cheap AirBnB in the township of Franschhoek, about an hour outside Cape Town. This was our first time staying in a township and we were a little worried about the security of the area. In our guidebooks, most of the crime you hear about in South Africa happens in the townships. Were we inviting doom into our journey!?

Other than the chorus of barking dogs that happened every night we were perfectly at ease and felt safe. The barking dogs were epic, though. I mean: during the day we didn’t see a single pup, but come sundown it was like they’d rise from a secret den and their sole purpose was to bark their balls off from 1am to 4am. But, hey, it was cheap as chips.

Our host, a helpful, but quiet, intense guy from Belguim once upon a time, gave us a list of vineyards we should go see. And see we did. We managed 4!

On our first day we managed to squeeze into Haute Cabriere before closing at 4pm. This was a lovely vineyard with a sweeping view of the mountains and valleys. For about 60 Rand each ($5USD) we tried 5 different wines and the waitress (is that what they are called??) gave us another taste for free! It was delightful! Our favorite was the Pinot Noir Reserve 2014: delightful and flavorful.

The next day we visited 3 more vineyards.

This vineyard features a museum with a lot of information about the region (it’s free) and boasts that it shares its profits with the employees. It had some very pretty buildings in a picturesque landscape. They weren’t offering tastings when we got there at 10am, so we walked around and admired the views for a time.

This was a beautiful vineyard with old architectural buildings and rhododendrons everywhere. We had our wine tasting after a lunch at their “Deli” which is a ridiculous name for what was really quite a fancy bistro. We had a charcuterie board and smoked cauliflower while watching a massive chicken strut around the diners. The cost of this marvelous lunch? About $15USD.

The wine was delightful. Jackson tried their brandy (yum!) and I had a flight of bubbly whites to sample. All for the delightful cost of about $5USD for my bubblies and $3USD for Jackson’s snifter.

As we ate and drank we observed how everyone at these vineyards was wearing white and floral patterns. There wasn’t a single neon, black or studded leather anything among the crowd. We must have gotten the memo because we were wearing the uniform: linens, pastels, whites and flowers. We scanned the estate for anyone not in these clothes and secretly scoffed at a couple wearing running clothes (oh! The nerve!). We’re drinking Pinot Tage here people! Let’s have some klassss!

I got a tasting of 3 different bottles for about $6USD (gasp!) and Jackson sampled 3 as well. The views were beautiful and their roses were a delight. We went on a small walk around the grounds and enjoyed the quiet solitude of the rolling hills (made even more enjoyable by how tipsy we were feeling!).

We took a quick look in their clothing shop (linen: I can’t help myself). The linen clothes were going for a modest $500USD a piece. Trying not to bolt and run because we had looked at the price tag, we took a leisurely stroll through the rest of the shop before loudly pronouncing that we really must be going.

The experience was a lot of fun and we couldn’t believe how cheap it all was. I kept comparing prices to what my American brain thinks should be the totals and am flabbergasted by how off my guesses are. Surely, I think, a bottle of Pinot Noir so good will cost me $100USD? Not so. More like $14.

We decided to get a quick tour of downtown Franschhoek, and stopped in a small wine shop for a gander.

Wandering over to a basket of wine bottles, we discovered that nothing in the basket was younger than 15 years old. I picked up a “BMW series: 1990” and was stunned at the cost. 65 Rand ($5USD). How? What was wrong with it?

“Nothing!” said the jovial attendant when we called him over. “These are some bottles the boss wants to get rid of, so he puts them on special. They’re fine!”

I couldn’t help my curiosity. So what if the bottle is actually vinegar? Let’s try a 28-year-old bottle of shiraz! Live large!

It wasn’t the best red we’ve had, but was still yummy. Tasted a bit like port.

Stellenbosch, Franschoek: well done. We thoroughly enjoyed dressing in our florals and whites and linens in the South Africa wine region and pretending we owned the world for a day.