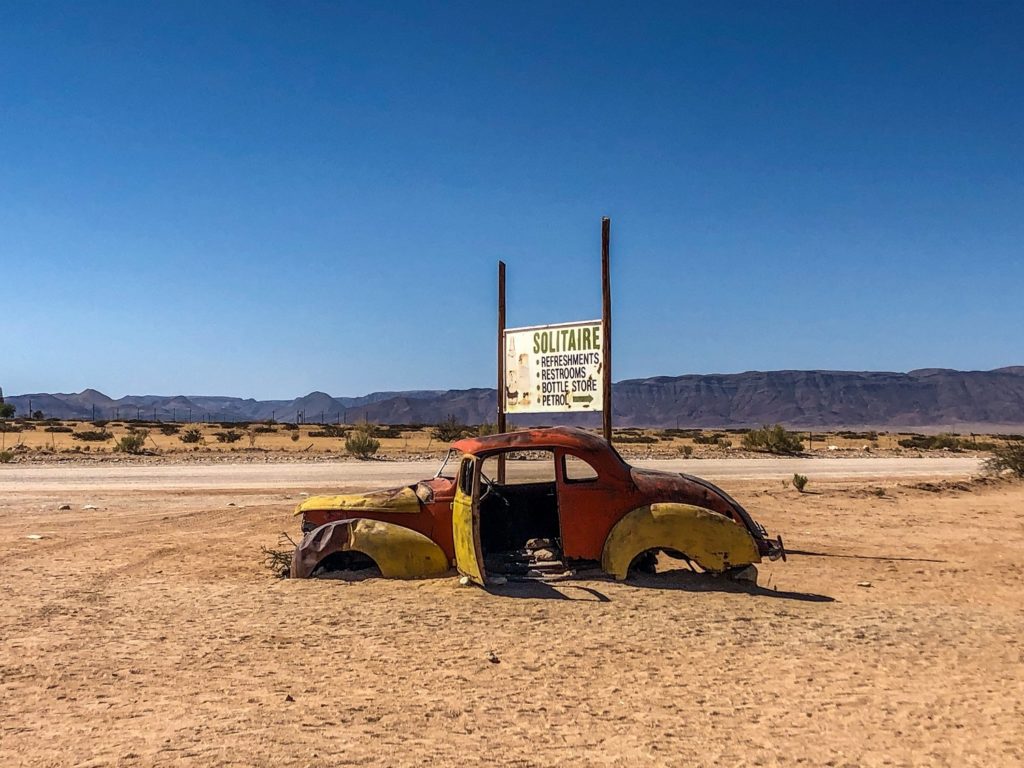 Everyone has a bad day (or week) when on the long-haul. Bags get stolen. People get sick. And sometimes you get really, really lost and then ruin your rental car.

In Solitaire, only a short way up the road from where we were supposed to stay near Soussusvlei, we could get delicious apple pie (world famous!). Thinking we could make a cheeky day trip up for some apple pie, we left our cushy campsite.

Our car bumped and ground its way toward Solitaire. What was supposed to be a 45-minute drive turned into a 90-minute drive of very uncomfortable roads (these C roads SUCKED). As we plodded our way along, we decided to forgo the accommodation we had booked 45-minutes away from Sessriem and instead push on further North in the hopes of finding a place closer to Walvis Bay (our eventual destination on the coast). We didn’t want to have to drive these roads again! Yuck!

Solitaire did deliver on the pie. It was very yummy.

Feeling hopeful, we pushed on heading North along C14. Jackson found a place for us to stay that boasted no electricity and would hopefully give us some epic star viewing as it was in the middle of the desert. Sweet!

Turning on to C26, we reached our campsite: “Namib’s Valley of a Thousand Hills Camping and Lodge”. Uh Oh: The campsite was 6km (3.75 miles) down a sandy road, but we can make it! (I think?).

We got about 500m in to the driveway and our little car sank into deep, soft sand. We were immovable; up to our ankles in sand and without a hope in hell of getting out without help. We pushed, we put stuff under the wheels, we tried backing up: nothing. The car was stuck stuck stuck.

I tried not to panic. Surely, I thought, there will be someone along this road to help us out? It was 1:30pm. We still had plenty of daylight. As Jackson tried vainly to dig the car out in 100F (38C) degree heat, I walked back to the main road and waited. No one came. 20 minutes passed. I decided the best bet would be to walk to the lodge instead.

You ever get stuck in the desert? Let me tell you: it sucks. It’s hot, it’s empty, and there is no cellphone service. The wind blew like an oven and only succeeded in covering our tires in more sand.

After 90 min of panic and indecision (should I stay or should I go!?!) we saw our first 4×4! We’re saved! Turns out they were planning on going to the same campground as we! They could help us out!

Help they did! I named them Mr. and Mrs. Help. They were German.

Mr. Help attached a line to the back of our car and towed us out of the sandpit. Then he encouraged us: “If we can get a bunch of rocks down, maybe we can build a road for you to get to the camp on?”

We spent the next 30 minutes pulling up pieces of rock and lining up a track for the car to go over. The car went over the track perfectly until it ran out and the car sank back into the sand. We threw up our hands in defeat.

“There’s no way we are getting to that camp.” Jackson said.

“There’s a camp about 5km down the road!” Mr. Help said encouragingly.

Mr. and Mrs. Help got behind their 4×4 and pulled our car out of the sand pit again, this time towing the Ford back toward the main road. Jackson sat in the car to help steer and I walked along side.

Then Jackson lost control of the car because you can’t hit the breaks while being towed. The car swung wildly out behind the 4×4 and I waved frantically for the tow to slow down. The Germans came to a fast stop and the ford slammed into the back of the 4×4, scratching the paint and denting the trunk.

“Don’t worry! We’ll take it from here anyway.” I reassured him.

Jackson backed the rest of the way down the driveway until he hit the road. We watched Mr. and Mrs. Help drive on toward the campground. They promised to let the reception know we wouldn’t be showing up. “Namib’s Valley of a Thousand Hills? More like Valley of a Thousand Fucks.” I said, trying my best to dig red sand out of my nails. “Now what?”

We still had no cellphone service. Where do we stay?

We decided to head for Walvis Bay, about 230km (143 miles) to the west and hope to find a camp on the way there before nightfall. It was 3pm.

We drove about 30 minutes, entered a massive national park and promptly panicked. Will there be a campsite here?! We can’t drive through this at night!! Should we go back? Try to find that camp the Germans had told us about?? The potholes worsened in the park and the daylight was slanting dangerously behind the hills.

I’ll make a long story short: There was no campsite 5km (3miles) up the road from where we had gotten stuck.

There was nothing up the road except hopelessness.

We drove and drove. The sunlight got dimmer and dimmer.

“Why didn’t we get more gas in Solitaire!? Why didn’t we just keep going on toward Walvis Bay?! Why didn’t we just stay at the camp outside Sessriem?! Where will be stop tonight!?!” We moaned and cried in desperation as we lurched and bumped over some seriously rocky roads toward Windhoek, the opposite direction from where we needed to go.

I started imagining the worst: having to sleep in our car on the side of the road. There are hyenas, jackals, and plenty of other scary snakes that roam that country. I didn’t want to be out in the open.

Or: what if we ran out of gas…

We drove for 70km (43.5 miles) through some seriously pretty terrain (except we were too terrified and panicked to enjoy it) before finally finding a camp. It was getting quite dark, but we made it.

Hokas campsite was nice. After I had burst into exhausted tears, I was able to enjoy what we had found: No electricity! We could see the stars! And that night zebras came into our camp and ate some grass around our tent. (Cool!).

The next morning, we treated ourselves to a yummy breakfast before setting out for Windhoek (we needed gas, wouldn’t be able to make it to Walvis Bay with what we had).

No sooner had we left the campsite feeling slightly refreshed, a truck came in the opposite direction and hurled a rock at our windshield, cracking it. 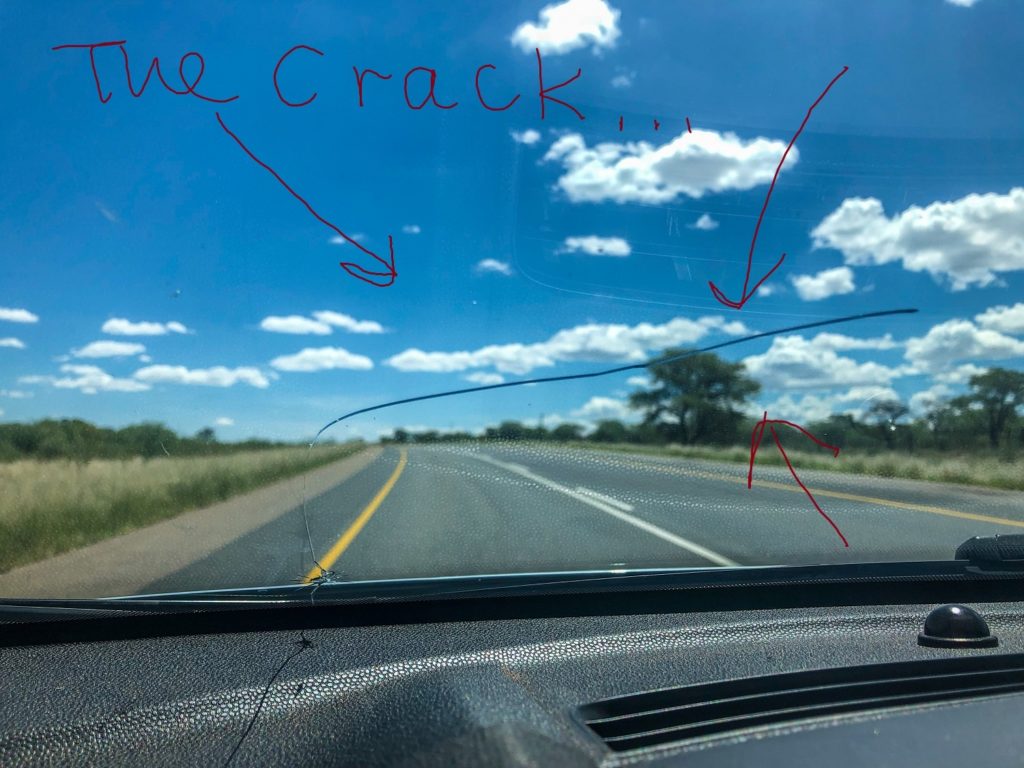 We drove for 6 hours: through Windhoek, then on the tarred B road that leads to Swakopmund/Walvis Bay. It was a long drive. I watched as the crack in the windshield grew bigger and bigger.

We finally pulled into the AirBnB in Swakopmund, totally exhausted but happy to be there.

“What’s that smell?” The host asked. It smelled like burnt oil.

Our car was leaking oil.

Turns out we had busted the rear suspension on our little jaunt through the backwaters of Namibia.