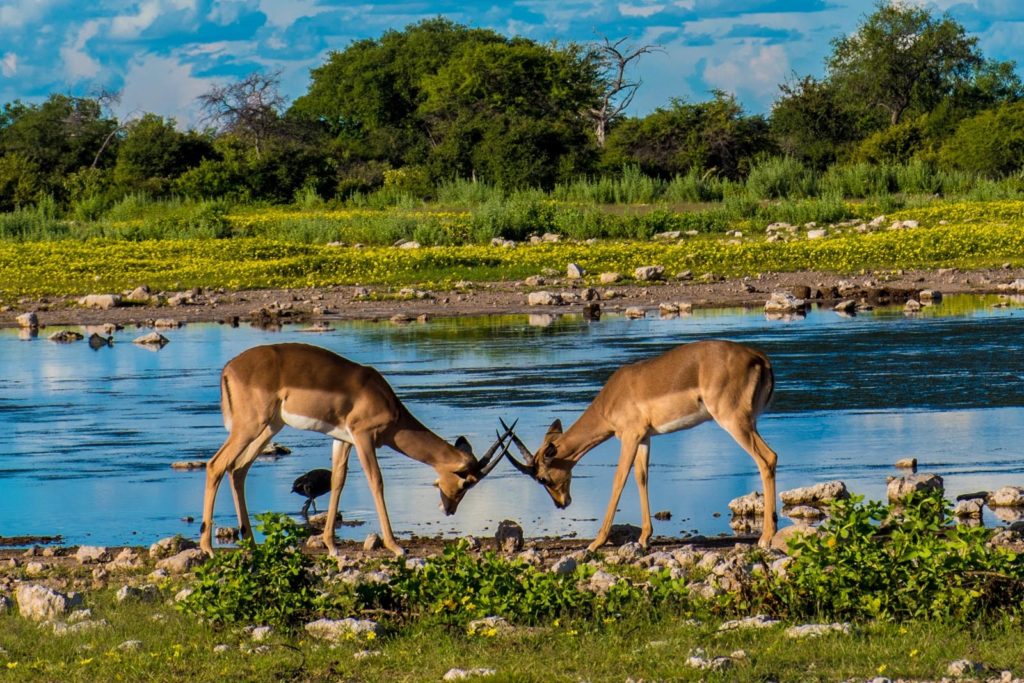 Considering your first Safari in Africa? Botswana and Namibia both provide excellent options, but it can be difficult to make a decision if your time is short. We visited Etosha and Chobe in March of 2018 and here’s our breakdown of Chobe vs Etosha: two Safari Parks that are world-class African destinations… but which is the better of the two? 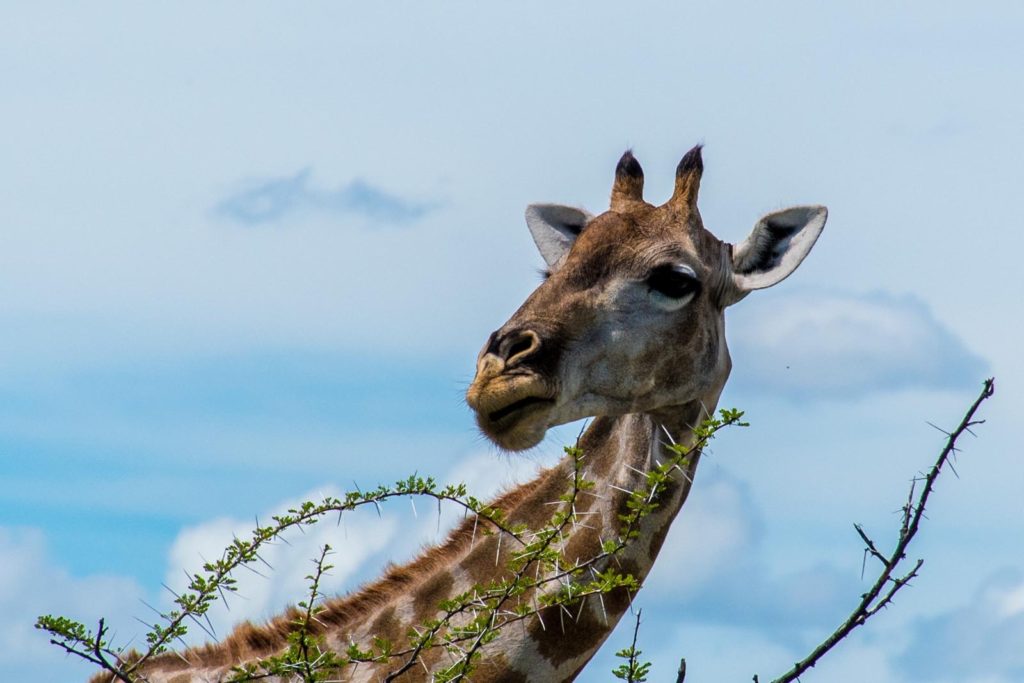 In the following post we have broken down the parks into several categories for comparison:

Flying in to Windhoek (Namibia’s major airport), you can get up to Etosha park in about 4 hours (according to Google). The roads are paved the entire way and are very well maintained. You can get there on a 2×4 if necessary.

Once in Etosha, you have various options for getting around the park. There are many safari tours you can book or you can self-drive (like we did).

The main roads in the park are good quality dirt roads and you could easily drive the park’s main arteries using a 2×4. If you wanted to go off onto the smaller roads, you’d really need a 4×4 or SUV. (We found that the main roads are just as good, if not better, for seeing animals than the smaller roads!!).

Chobe is really off the grid. You’d need to fly into bigger airports, like Johannesburg, and then take a small regional flight to Kasane, which is the nearest airport to the park. Otherwise, you are looking at a 13+ hour drive from Pretoria.

Once at Chobe, you have very limited options for getting around the park. To self-drive, you’d need a serious 4×4 (an SUV will NOT cut it!). The roads are really bad (if you can even call them roads…). There are many safari tours that are offered in the area and it is quite easy to book a tour through your accommodation. We’d highly recommend that option!

Chobe is also a massive park, so it’s really easy to spend hours driving around and it’s also really easy to get lost as the roads are not well marked.

In 2015, about 1.5 million tourists visited Namibia. The rainy season sees the least amount of visitors during the year and that means that Etosha is virtually empty. At any given time, we were the only car on the road. At the most, we saw about 4 other cars clustered around a massive herd of zebra and giraffes. That’s plenty of room to take your pictures and move on.

Botswana’s tourism sees 2.5 million tourists a year. That’s a cool million more people checking out the country. Chobe reflects that increase, quite substantially. When we were there, there was a mad rush to go see some lions eating a warthog. There were so many vehicles with people in them, we had to wait in line in the car to see the lions. That was super lame. It also means that the roads are a lot more congested with cars which really takes the “wow” factor out of the experience.

There are 6 campsites inside Etosha National Park and many more outside the various entrances to the park. Here is the website with details on what is available inside the park.

We camped at Namutoni and not only was it pretty expensive (about $60USD for the two of us per night) it was really crowded and a little rundown. I can’t speak for the other camps, but this was not a great one. We were there for 2 nights. If you are looking to save some money, the campsites outside of the park are generally cheaper and better maintained.

During high season these campsites will sell out fast, so make sure you book well in advance!

There are plenty of campsites, lodges and hotels scattered around the park at the various entrances. We camped at the Mopane Village Lodge Etosha for one night, which was a delight: clean, welcoming, and beautiful.

There are 3 public campsites within the park. All of these require a 4×4 to access!! Given the limited availability, they book out well in advance, so make sure you book ahead!

There are 9 lodges available in Chobe. You can read more about them here. (They are not cheap!).

Around the park you can find a plethora of campsites and lodges to stay in as well. We stayed at Senyati Safari Camp and really enjoyed our stay. We saw some amazing animals at the camp itself as it sits facing another game reserve. The elephants were so cool! They offer excursions to Victoria Falls as well as safaris to Chobe. You’ll need a 4×4 to get to Senyati, the roads were sandy and crappola.

During the rainy season, animals will not flock to the watering holes. In fact, don’t even bother trying to go to a far flung watering hole because you’ll see a whole lotta’ nothing (like we did). I think this gives Etosha a bit of a bad wrap because of the scarcity of animals. I’m told in the dry season the animals will be out in force and you can see some serious herds. 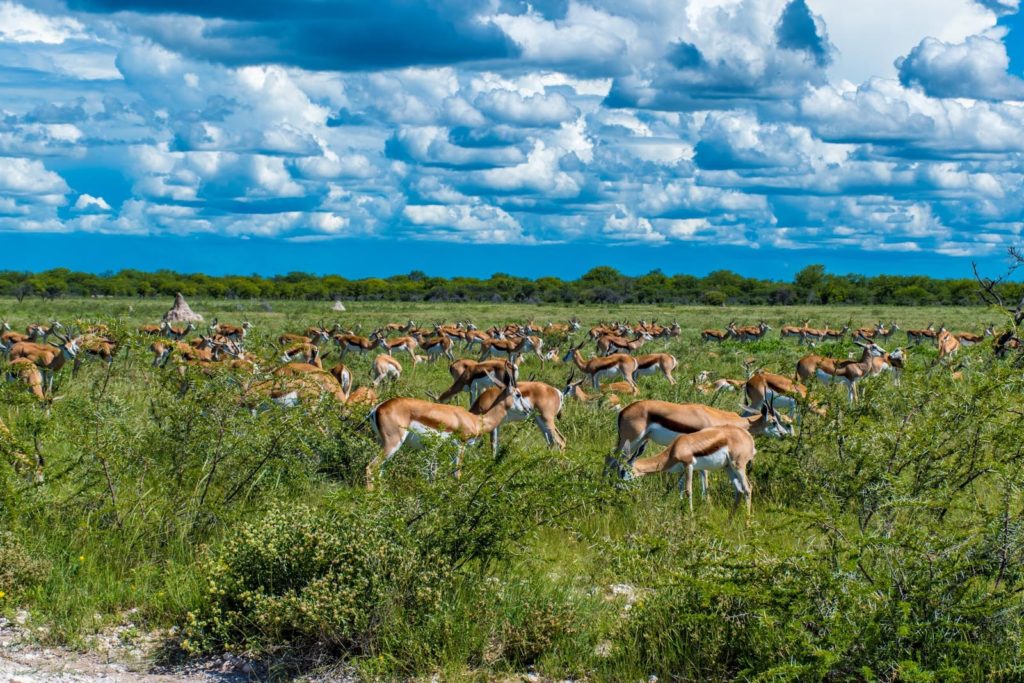 Despite the rain, we saw some great sightings. Giraffes, zebras, elephants, kudu, wildebeest, springbok, oryx, a fox and tons of birds (ostrich!). Some of the camp friends we made saw cheetahs, rhinos, and lions, too (we weren’t so lucky). I think a lot of Safari-ing comes down to being in the right place at the right time. One local we spoke to outside of the park said that the best time to go was the rainy season because the landscape is lush and green and the animals are all fat and happy unlike the dry season when they look really skinny and sad. If you’d like to see more photos we took you can see them here. 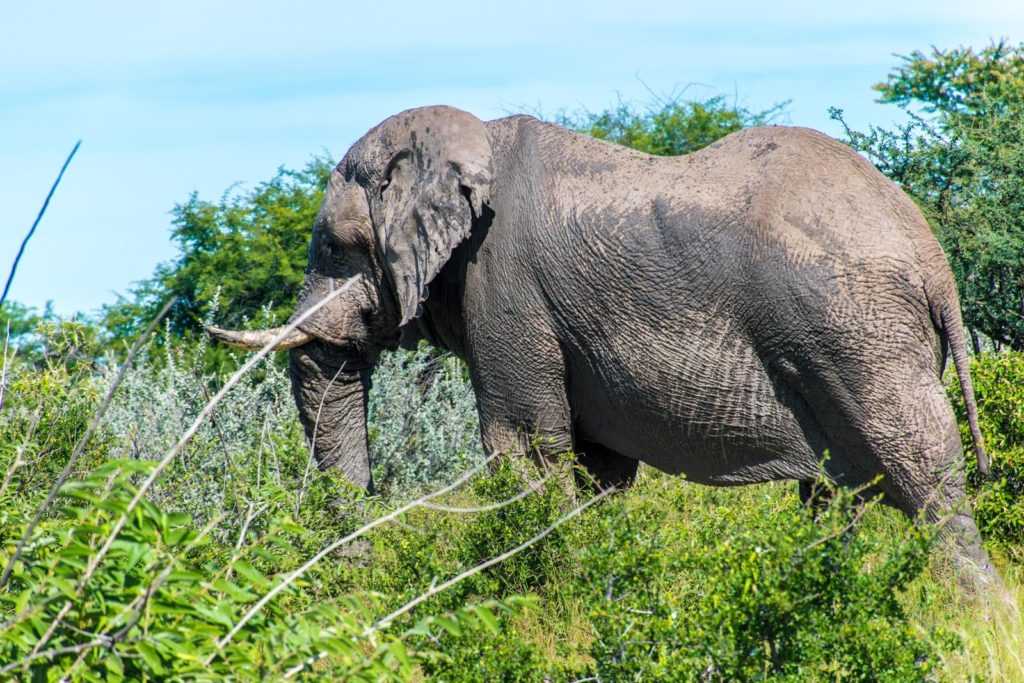 Botswana is home to the highest population of elephants in Africa. That’s a crap-ton of elephants. There are elephants EVERYWHERE in Botswana, not just Chobe (although you’ll find a lot in the park, too!). One family we met told us how they went on safari in Chobe and saw a massive herd of hundreds of elephants. (We were not so lucky. We saw more elephants on the highway leading to and from the park, ironically). 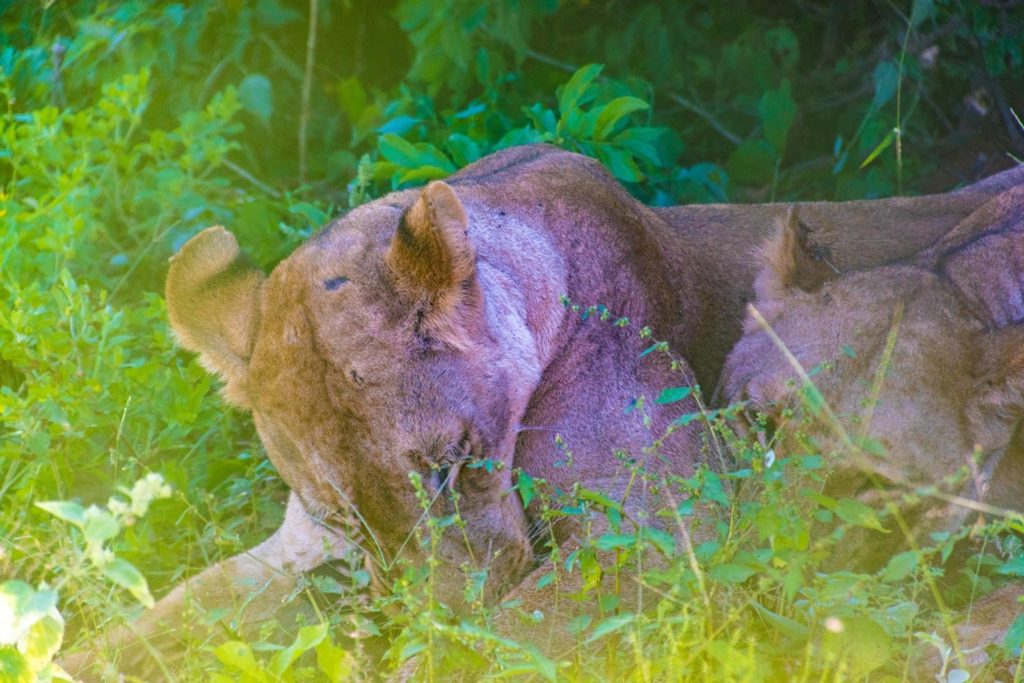 I’m told you can witness a serious amount of animal wildlife in Chobe. We did not. But, it all comes down to luck sometimes. Unlike Etosha, you can see hippos, crocodiles, and in general, more birds and water life than Etosha as well as all the animals I listed above. Chobe is lush and green in the rainy season because the Okovango Delta floods and brings a whole lot of wildlife to the region. Unfortunately (or fortunately?), the park is massive and the animals are hard to find unless you can charter a flight over the park to really take it in. 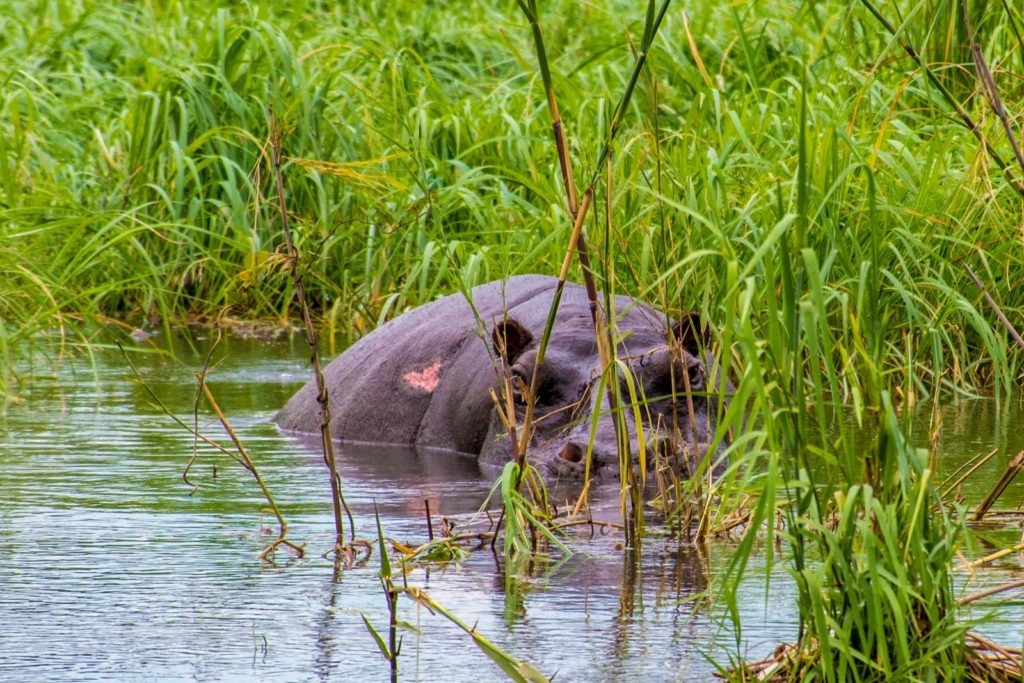 Beauty of the Parks

Etosha is quite flat and the Etosha Pan is huge. This pan is a massive dry salt flat that stretches out into the horizon. This makes spotting animals pretty easy as they stick up out the landscape for the most part. 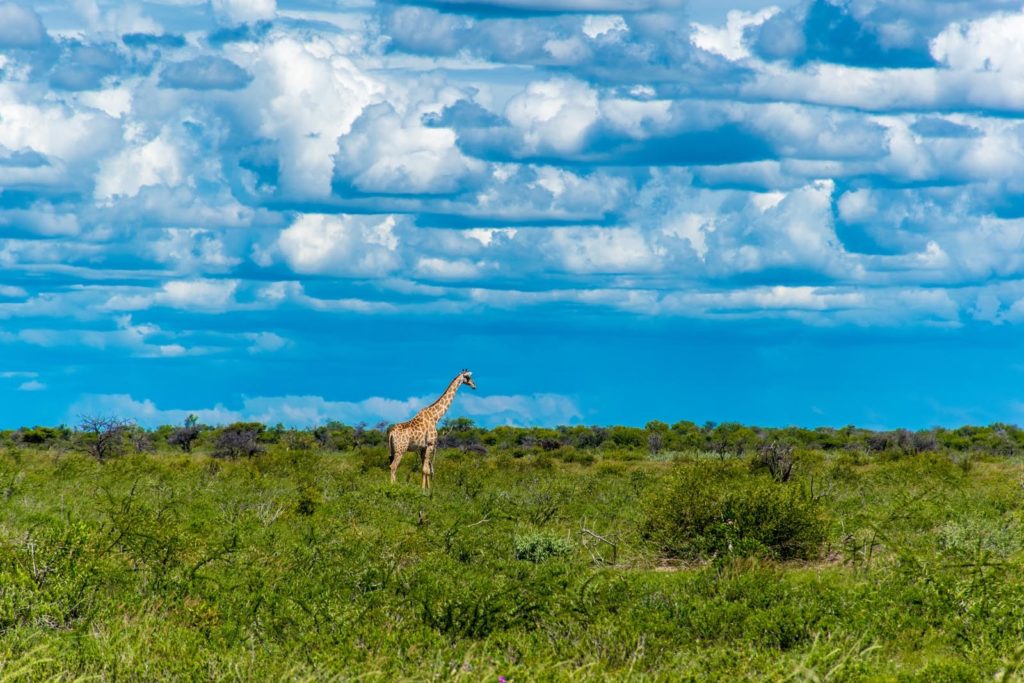 If you go off onto the smaller roads the bush gets thicker and it’s harder to spot the animals in the undergrowth.

The rains were dramatic to watch on the plains and the sunsets were beautiful. Etosha is also a lot dryer than it’s sister park to the east.

Chobe has a series of rivers running through it, making the park really lush and green. This also means that there is a lot of bush and trees for the animals to become obscured in. The park is also not super flat and the roads will curve and go up and down quite a lot. 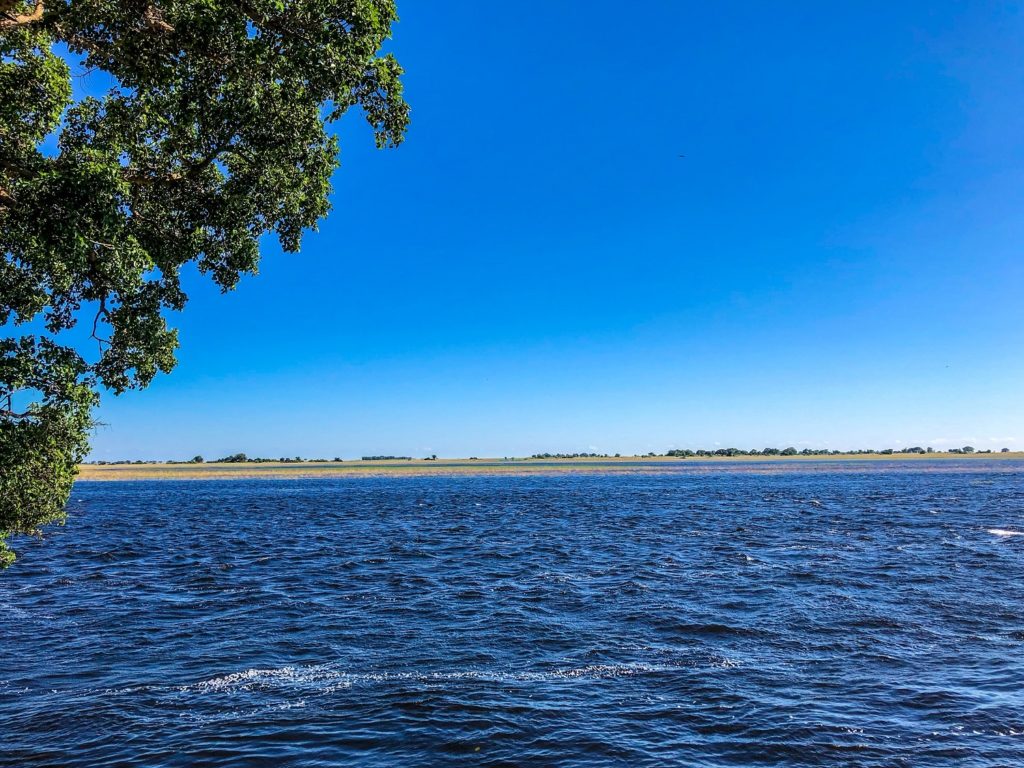 It is quite dramatic to be in the park, it feels like you are entering the “Lost World” of Africa, especially when you spot a vulture flying around the minute you enter.

When we scheduled our safari, we had to pay about $30 USD in entry fees for the two of us in addition to the cost of the safari. That was a 3-hour tour. Ouch.

Basically, you’ll pay the same in entry fees for one day in Chobe, as you would for two days in Etosha.

Chobe vs Etosha: Who Wins?

Etosha is cheaper, less crowded, and more accessible. With the right amount of luck you can see almost the same range of animals as you would see in Chobe (except that the human population will be far less…).

Liked this? Pin it!