Home / Blog / Advice / Driving in Croatia: Things to Know Before You Go 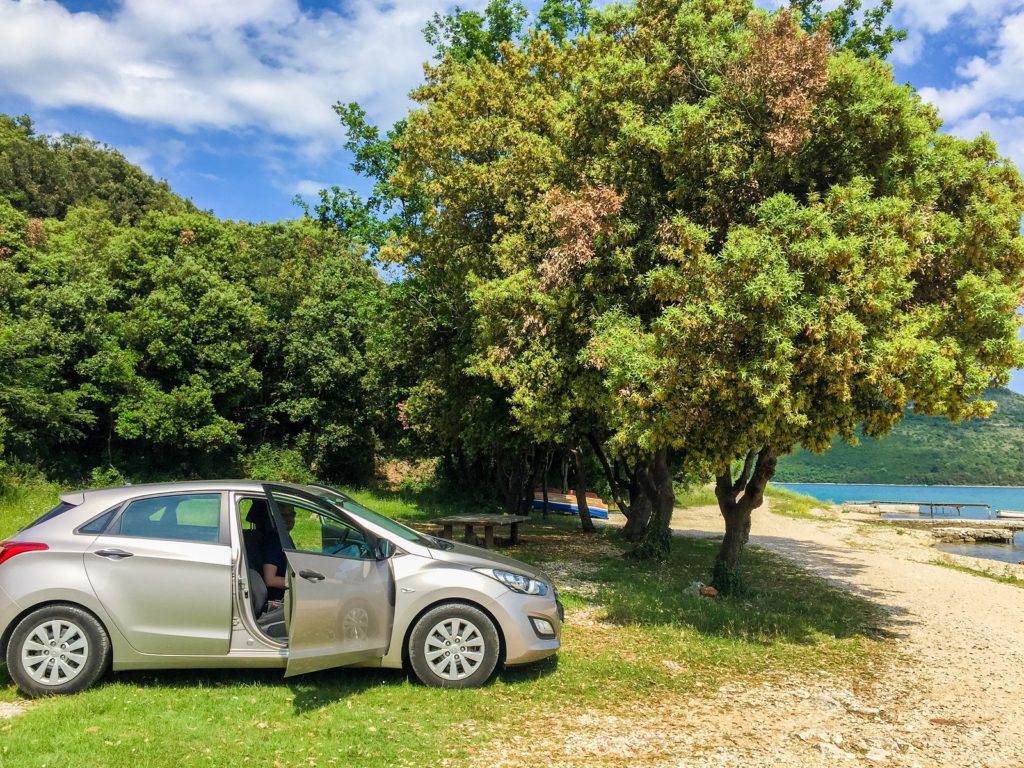 What Side of the Road do you Drive on?

When we were there, we drove a manual transmission car and I found driving most difficult in the situations where your natural instincts handle everything. Going around a round-about and wanting to change gears, my instinct was to do so with my left hand, so I’d have to consciously remind myself that I was about to change gear with my right hand. Out in the countryside, it’s also helpful to remind yourself to stick to the right when you pull out of your parking spot; traffic is often a good reminder of where you should be, and out in the country you might not have that to rely on!

Also, get used to thinking you’re about to indicate your turn and instead accidentally turning on the windscreen wipers.

If you’re coming from a right-hand-side-of-the-road country, driving’ll be pretty straight forward. Your only issue will be if you’re used to automatic transmission but find yourself in a manual…

What Kind of Car is Best?

You’ll find most rental cars in Croatia are manual transmission, though for a higher price you can find automatics. You can easily get by with a regular 2-wheel drive car, and if you’re planning on visiting some of the smaller villages, you might find the smaller the car, the better.

If you’ve never driven a manual transmission car before, I’d definitely advise getting some practice in before you go ahead and rent one. Understanding the actions required while driving, and executing them in the moment are two different things!

The little Hyundai we had took us everywhere without any issue. If you decide to go off the beaten track a bit (like we do), you’ll likely come across some lesser maintained roads, and even the odd gravel or dirt road here or there. These will likely be no worse than anything you’ve encountered in your country, and a small two wheel drive will be able to handle them fine.

A quick warning: Be cautious when going too far off the beaten track. During the 1990s, Croatia was in conflict, and as a result there are some lingering landmines around the countryside. A good portion of the country is clear of these, but there is still a danger at times.

Be aware of the usual pitfalls when renting a car (taxes, insurance, additional driver fees etc). In addition to this, you’ll find that there are extra fees for border crossings (unavoidable when driving from the north to Dubrovnik, due to a tiny strip of Bosnia), and for taking your rental on a ferry to get to the Croatian islands.

In terms of where to start on your epically beautiful Croatian road trip, you’ve got a few options. Here are the four starting points we’d recommend:

Overall, we found the roads in Croatia to be excellent! We took back roads, country roads, dirt roads, and highways. All of them were well maintained.

That said, the other drivers on the roads can vary. Croatian drivers can be quite reckless, speeding and passing on blind corners and with limited room. On the other hand, you’ll likely come across plenty of tourist drivers as well who are often slower and more indecisive about where they’re going. Keep an eye out for both.

When we were there it was the shoulder season, so while there was a good amount of traffic, it was nowhere near what it can be in the height of the high season (June-September). Aside from the big highways, most roads will only have one lane going in each direction, so when traffic gets backed up, you have no choice but to wait for it to move. This gets especially bad as you get to the more popular areas in the south, along the Dalmatian Coast.

For the most part, you’ll not have any trouble finding a petrol station. Even in the most remote parts of Croatia, you’ll still only be two or three hours from a larger town or city, and even a lot of villages and smaller towns will have a petrol station or two. Petrol prices are similar to what you’ll find around the rest of Europe (at the time of writing, about €1.24 per litre).

We relied on Google Maps exclusively. That said, when navigating the small winding streets of an Istrian village, you’ll need to use some common sense as well. By default, Google will take you via the fastest routes, which often make use of the tolled highways. If you’d like a more scenic route, I’d recommend using the “avoid tolls” option. We did this throughout our trip, and this option pushed us into some fantastic routes through hills and mountains!

During our two weeks driving in Croatia, we came across some great roads to drive. Here are some of our favourite routes:

If you’re looking for more route suggestions, check out this post over on The Culture Trip.

We didn’t encounter any checkpoints while we were driving in Croatia, however we did see many police speed traps, and were pulled over at one point on our way to Plitvice for a random spot check (there was no bribe involved; they just wanted to check our papers). Make sure you have all your correct documentation, keep to the speed limit, and you’ll be fine.

Overall, driving in Croatia has been one of our favourite road tripping experiences! You’ve got windy twisty roads through gorgeous mountains, and idyllic coastal roads next to azure blue waters. Coming down via the “serpentina” roads of the mountains near Senj on our way from Plitvice to Crikvenica was one of the most epic and striking drives we’ve taken! We spent 2 weeks driving in Croatia and while it was sufficient, we absolutely could have done longer. If you’ve got the time, my opinion is that you should spend as much as you can there!

We were only in the Istrian peninsula for 4 days, and if there was one regret we had, it was that we didn’t have the time to fully explore this beautiful part of the country. Similarly, we really only visited Zagreb and Samobor in the north, and would have loved to spend more time exploring this region. Another part of the country which we enjoyed for only a day was the Pelješac peninsula. This was beautiful, sleepy, and quiet part of the south, compared to the areas surrounding it. Even though we only spent a day there, it contained one of our favourite beaches of the trip.

Driven in Croatia? Feel like we’ve missed something? Let us know in the comments!