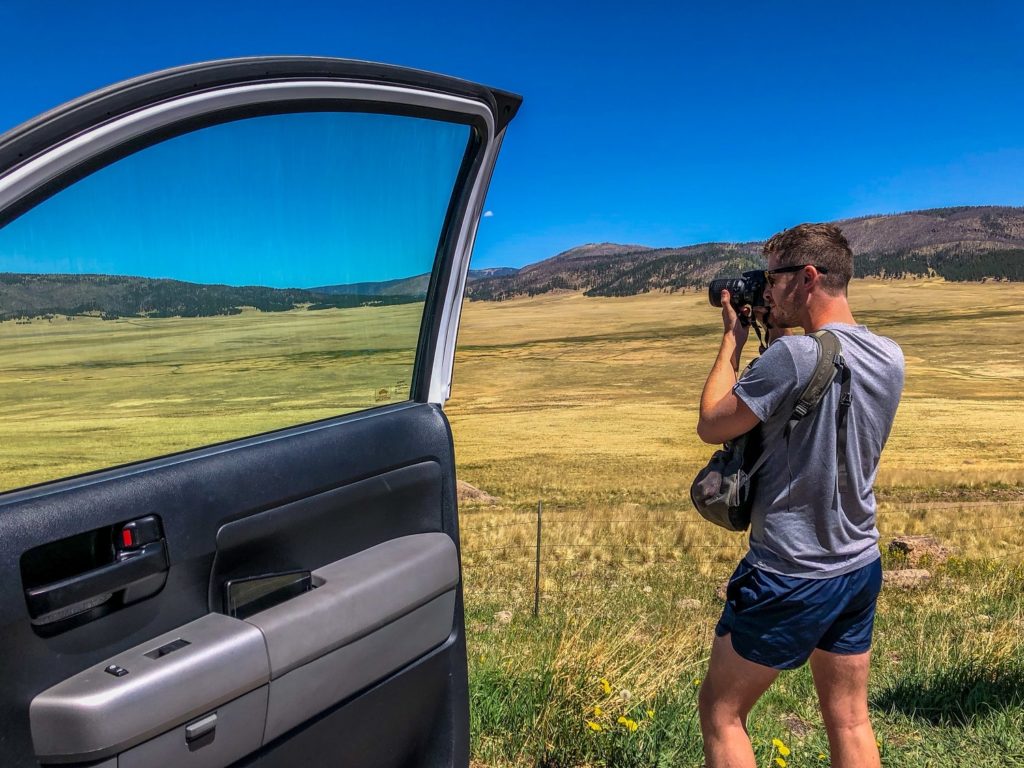 There have been times in the past when we’ve been shown a really special corner of the world by a local, whether that was in Germany, Poland or Japan. Regardless of the place, a local guiding us is really the best thing ever when visiting a new area. New Mexico (NM) was no different.

An old family friend, Trevor, who lives in Albuquerque, NM, was incredibly generous with his time and took me and Jackson on a full, travel-round-New-Mexico bonanza. We focused mainly around Albuquerque and Santa Fe, NM but saw a ton of stuff in one packed 12-hour day that made our visit really awesome.

We thought we had to share our route in case anyone with a spare day or two needed some insights about activities in this region and just how possible that is in 12 hours.

Ok, enough with the introductory banter: what the hell did we do?

We Ate our Weight in Breakfast

We scooted over to Hannah and Nate’s, a local joint in Albuquerque that was delightful. The Huevos Rancheros was yummy as hell and stuffed me fuller than a garbage can on a Sunday night. Just… roll me out of there, why dontcha?

I felt really good for going to a local spot because, I have to be honest, the majority of the Unites States’ restaurant lineup is pretty rough. You’re basically looking at your choice of:

The list goes on, as you can imagine, and most of the time you’re looking at these as your only options when driving on the highways in the USA. I’m not saying these places are bad, just that it’s nice to try to support the local small-fry that’s generally got a good line-up of local, yummy stuff you can’t find anywhere else.

In New Mexico the offer of choices is no different from above, but the least we can do is try to find places that aren’t major chains. That said, we did go to IHOP(b?) for breakfast on our third morning because sometimes the choice between the local joint and a brand you recognize is hard…

Driving up Rt. 4 toward Jemez Springs, we stopped by the side of the road and gawked at some beautiful cliffs.

According to the locals, the cliffs are sacred so you can’t go scrambling over them. It wasn’t too hot as it was still early in the morning and we walked in the shade of the stone and marveled at how beautiful the red clay looks against the blue sky.

Driving up here takes you through the Jemez Pueblo which is a Native American reservation. It’s awesome to be able to drive into the reservations and get a glimpse of their world.

You get a lot of that in the Southwestern USA.

Here’s a massive caldera sitting in the desert of New Mexico. It’s a wide open space with a whole lot of bike trails, hiking, and outdoor activities to do if you want to get yourself a permit and go into the park for a weekend trip. We just drove into the center and enjoyed a look around before heading back out.

We pulled up to the side of the road before driving off and took some pictures, trying to capture what we were seeing. Unfortunately, I’ve noticed a theme while travelling to mountainous places is that you cannot capture the raw power and magnitude of mountains, unless you’re, like, National Geographic and then: fuck you. 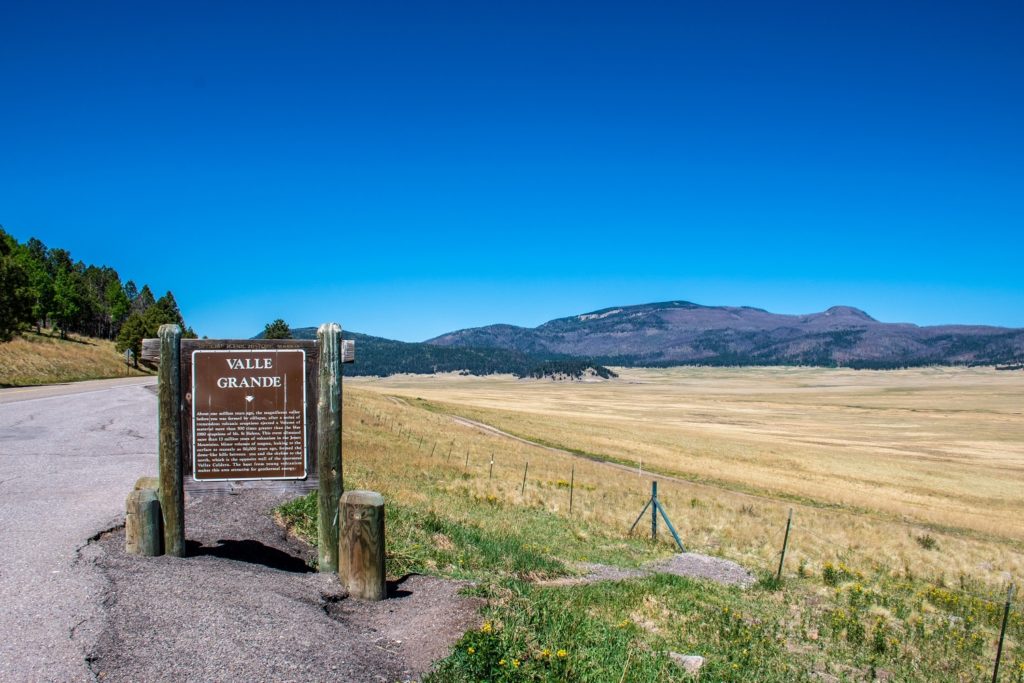 We all agreed that if we had another week off we would definitely come back to this beautiful park and walk around. I’d need to bring a canister of oxygen, though, because even walking around the parking lot I felt like I was breathing through a straw. The highest altitude of this area is at 11,253 ft (3,430 m) making any buttery, ocean-air-breathing noob like me feel like an 80-year-old.

The altitude also makes this park a bit chilly. The wind was whipping around and the temperature couldn’t have been more than 70F (20C) in the sun. Due to how dry this area is (a mean humidity of 15%; a high of 30%) the temperature difference between sun and shade can be humongous. All of this means perfect temperatures for a hike, if you can breathe and also moisturize your ashy, dry face and cracked lips.

This drive is a beautiful road that cuts right through the mountains and takes the driver through the Bandelier National Monument. The views from the road were stunning and felt like we were driving through a post card.

As we wound our way through the mountains, we watched as the temperature outside dipped down into the fifties and then back up into the seventies when we descended toward Los Alamos.

Originally a top secret site for scientists to develop the nuclear bomb as part of the “Manhattan Project”, Los Alamos today is a somewhat quiet, sleepy town of just over 14,000 people with a lot of scientists still working away on whatever top-secret science-y thing they’re involved in. (Let’s hope its all in an effort to help solve the global plastic crisis, right?).

The town itself sits around 7,000 feet (2,133 m) above sea level and is perched precariously on rounded cliffs. The town looks like a massive monster came through and gouged out these valleys between the houses. According to Trevor, there isn’t much to do there. Even the travel guide for Los Alamos seems to shrug its shoulders when I clicked on the “walking tour” button, coming up with the dreaded 404: Not Found page. Whoops.

That said, the Los Alamos History Museum looks like a good place to stick your head into if you are there for a few hours. We didn’t get a chance to go, but I’d probably check it out if I were there.

We stopped in at Rancho de Chimayó for a seriously good meal. This is New Mexican food at it’s finest, people! I had a “chile relleno” and was in heaven. 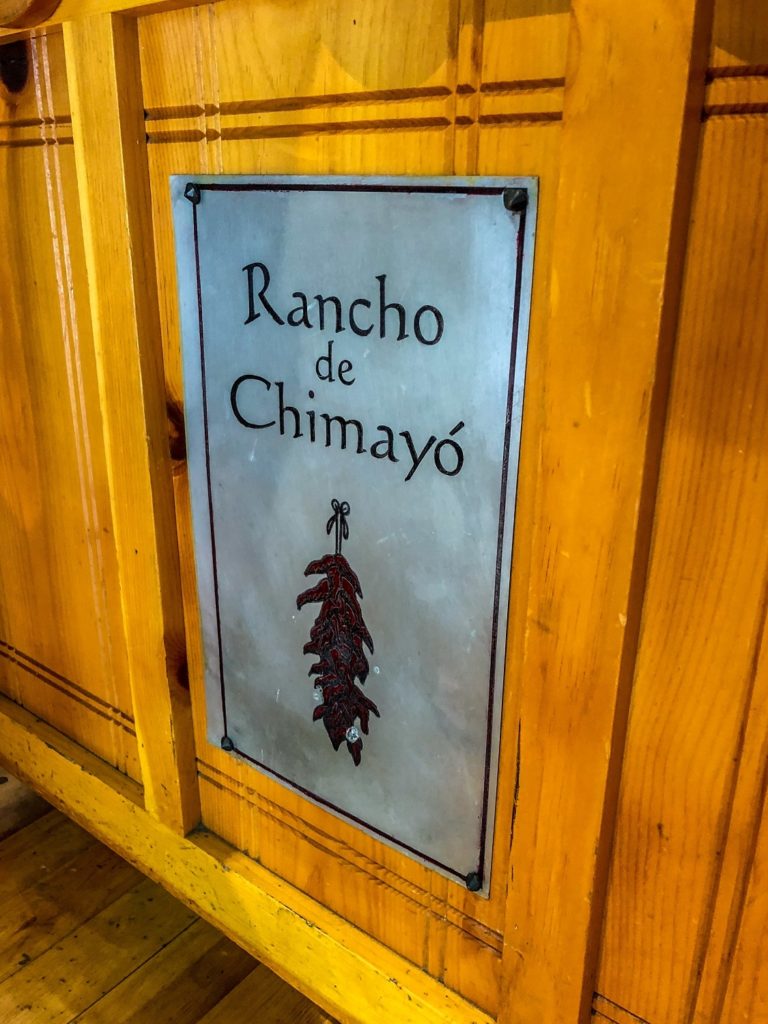 The decor of this place is awesome, too. Everything feels really authentic and the restaurant is filled with relics from the past. It’s a great place to stop: highly recommend!

Pulling in to the capital of NM we were greeted with the beautiful downtown of Santa Fe: the oldest capital city in North America.

Santa Fe boasts beautiful pueblo buildings. We enjoyed wandering around and looking at how beautiful they were against the sky.

We went into the Georgia O’Keeffe Museum and enjoyed looking at all of the work she had done throughout her life. I didn’t realize that she is 100 years older than me! I’d always assumed that the painters I was looking at had been dead and gone for so long that comparing ages would be stupid, but O’Keeffe was born in 1887– 100 years before me. I thought that was cool. She was such a badass.

There’s also the Plaza at the center which has a ton of local jewelry for sale. We stared at that for a little, but weren’t willing to buy.

The galleries in Santa Fe are so much fun to look in as well! We popped into The Monroe Gallery of Photography that features some of the most iconic photographs in history. I loved wandering around this place, looking at signed work of some of the most influential photos of the last 100 years. Wow. 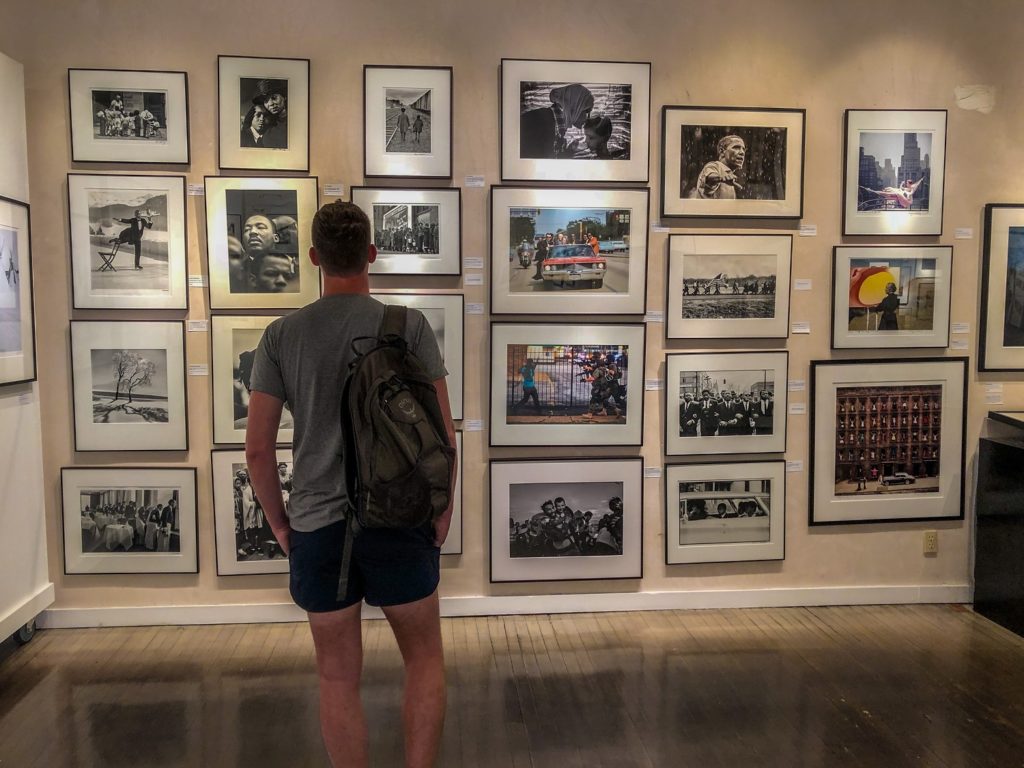 I don’t think this was ever put together with any thought given to the poor writers who would have to try to describe it to an audience that has never been. I’m going to quote burgerabroad.com: this is “art on steroids.” I’ll write a post about the experiences we had there in a little bit because THEY CANNOT FIT INTO THIS POST. Meow Wolf was like I was tripping balls on psilocybin mushrooms except I totally wasn’t.

I loved this experience. After all we had done earlier in the day, I was feeling pretty tired when we rocked up, but then once we walked inside I was blown away and felt like I couldn’t really blink for fear of missing something. It’s… It’s a trippy experience and one that I won’t be forgetting any time soon. I would come out to Santa Fe just to go here because it is worth the flight.

We were taken to Tomacita’s in Albuquerque. This was another delicious dinner of New Mexican food drenched in green or red chilies and utterly delicious.

As a side note: I don’t know how anyone can stay thin in this place because the food is amazing, but the serving sizes are MASSIVE, covered in cheese and sour cream, and served with a 20oz soda. You’ve been warned.

This area of NM is a really great place to explore. We’re so grateful to Trevor for taking the time to show us a fantastic time while here. Mountains, forests, a massive caldera, food, the birthplace of the Atomic bomb, art, jewelry, and unhinged-batshit-amazing art are all what you are signing up for when coming out to this gorgeous area of the US. You can do this trip over the course of day, like we did, or stretch it out to really enjoy more of what was on offer. I’d love to be able to come back and spend more time exploring what we only scratched the surface of.