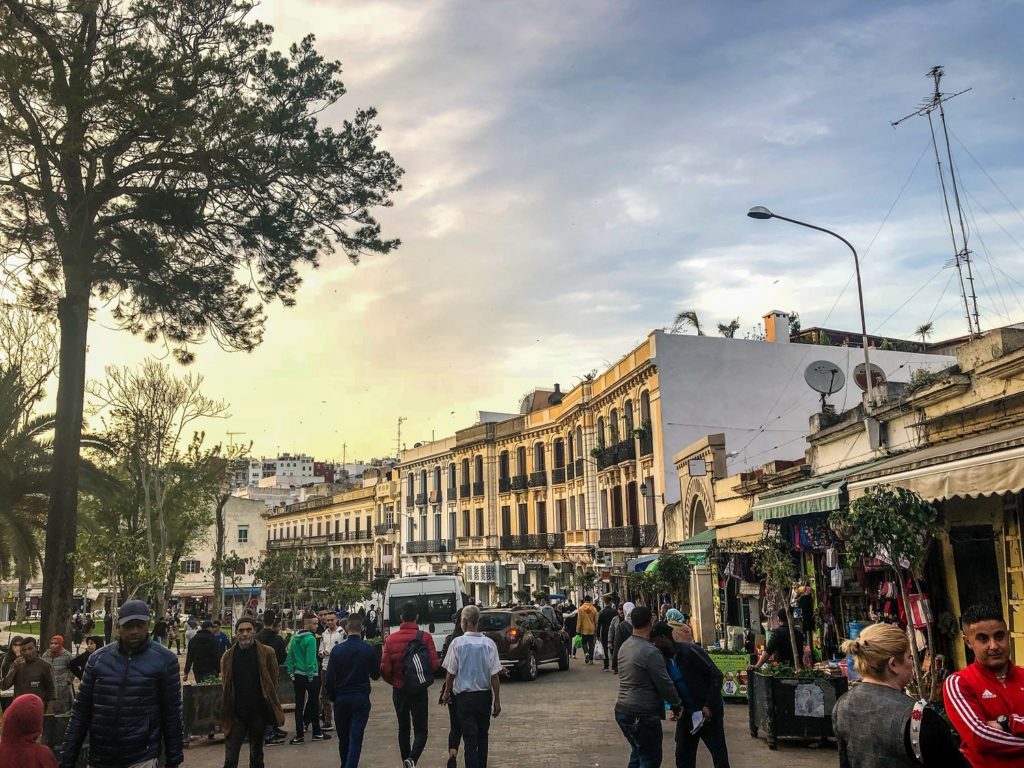 Tangier felt like I was visiting a great aunt who is comfortable sitting in her rotting furs amidst faded, dusty pictures of bygone days while listening to the construction on a new hotel outside her window.

With the smokey corners, the dusty shops, crumbling buildings, narrow cobbled streets with stones missing like teeth: it is a place that had been forgotten, but Tangier is now getting the attention it needs.

I can’t say that Tangier didn’t have its charm. It totally did, there is beauty to this city that can be mesmerizing, but is then tainted with some fresh bullshit (literally and figuratively) which makes my opinion of this town quite up and down.

The minute we walked into the old medina we got a massively psycho welcome from a crazy dude who wanted to “take us to our hotel” even though we knew where our hotel was thank-you-very-much. He didn’t like that, and took it upon himself to scream it at the top of his lungs. “I WAS ONLY TRYING TO HELP! FUCK YOU!”

I felt like I had walked onto a cliched movie set for New York in the 80s where a taxi almost hits a pedestrian and the guy yells “I’m walkin’ here!” as the Cabbie peels off around a corner into obscurity. I felt like the Cabbie: heavy, weighed down with my bags, and peeling off toward the relative safety of my hotel.

By this point, we were coming to the end of our 6-day visit to Morocco and we had tickets booked for a flight to Madrid. We had thought about taking the ferry into Spain, but the prices were expensive and flying to Madrid was much cheaper.

We budgeted two nights, one full day in Tangier and were staying at the Hotel Mauritania in the old town. Our room sat above a small square that looked out over grimy clothing shops, dim cafes, and a warren of streets leading off into different directions. I wanted to find the romance in this area, but instead checked my sheets and mattress for bed bugs because I felt full of the heebie jeebies.

Why did this town feel so dirty?

Believe me, I’m used to a layer of grime: I grew up in New York City, and if my park bench didn’t have something sticky on it I’d feel like I was too lucky and the karma would right itself by having a pigeon shit on my head.

Maybe it was that Tangier was so foreign? I mean: just across the Mediterranean was Spain and the rest of Europe but, on our side of the sea, we felt as far away as Southern Africa. The cultures are completely different. The language, the dress code, the religions… 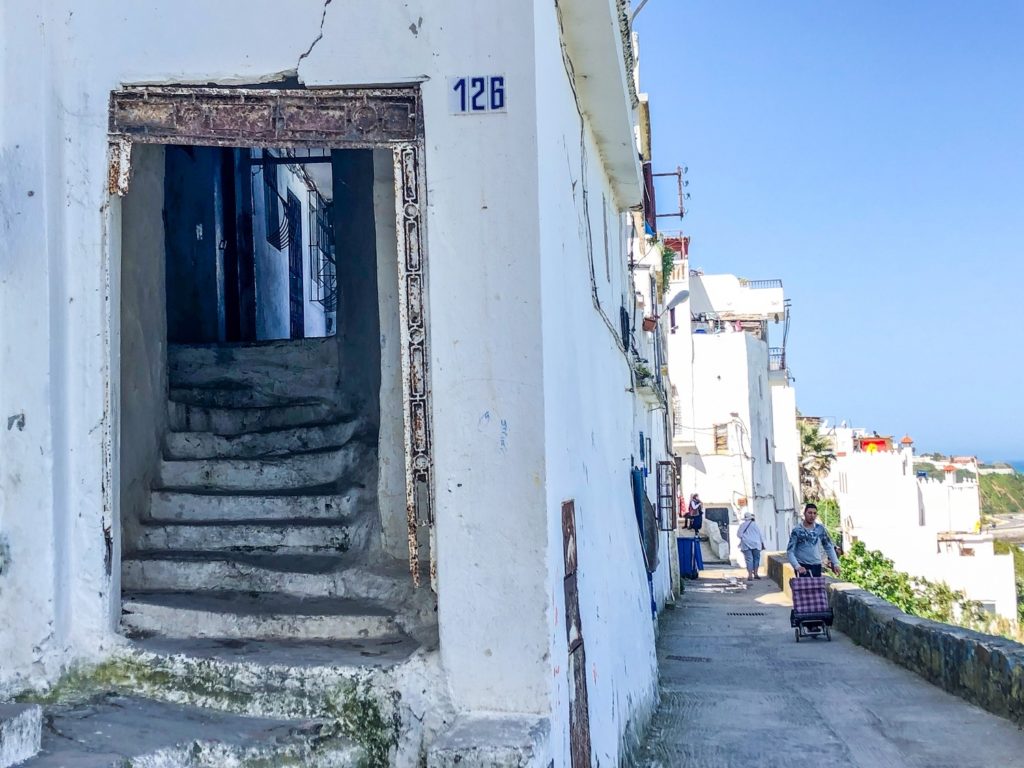 Tangier has grand old houses that sit as reminders of a time that was better. And it’s true: a couple decades ago Tangier was a host to thousands of expats who spilled their wealth into this city and created a popular destination for holiday goers and romance-seekers (including, apparently, a “haven for gay westerners“). Although the city is now seeing a boom in tourism and renovation, I still felt like this place has a long way to go to get back to its former glory days.

We scoured the old medina looking for tasty treats to gush over back home.

We ate at Ray Charly, a hole-in-the-wall chicken shack, which had a really good chicken platter. I enjoyed sitting at the bar and watching the grease-spattered chef cook. I was a little turned off when he’d take cash and count change with the gloved hand he had just fished raw chicken out of a canister with. Ew. But, I can’t fault the honesty, I guess?

We decided to try something a little different from another tagine (I was getting pretty sick of them by this point) and went to a Senegalese joint called Chez Amy. This place shares a corner with a sports bar and felt like we walked into a forgotten storage space that someone had turned into a kitchen. The food was good comfort food: heaps of rice and stewed chicken served with a spicy ginger juice that I guzzled.

The meals we’d had were cheap and good, but I was hoping we’d find something truly delicious that was also truly Moroccan! By this point I was feeling like the food people eat in this country consists of couscous and some stewed vegetable all the time. Where was the food that gets raved about? Why was it so hard to find a spot that was simple and damn good?

Then, we finally hit the jackpot: we wandered into a serious food market. I’d never seen anything like this and I was fascinated! Hundreds of chicken carcasses displayed on marble counters; offal laid out in dishes; full goat heads; and the really disgusting– yet totally mesmerizing– fully skinned and bloody cow heads. 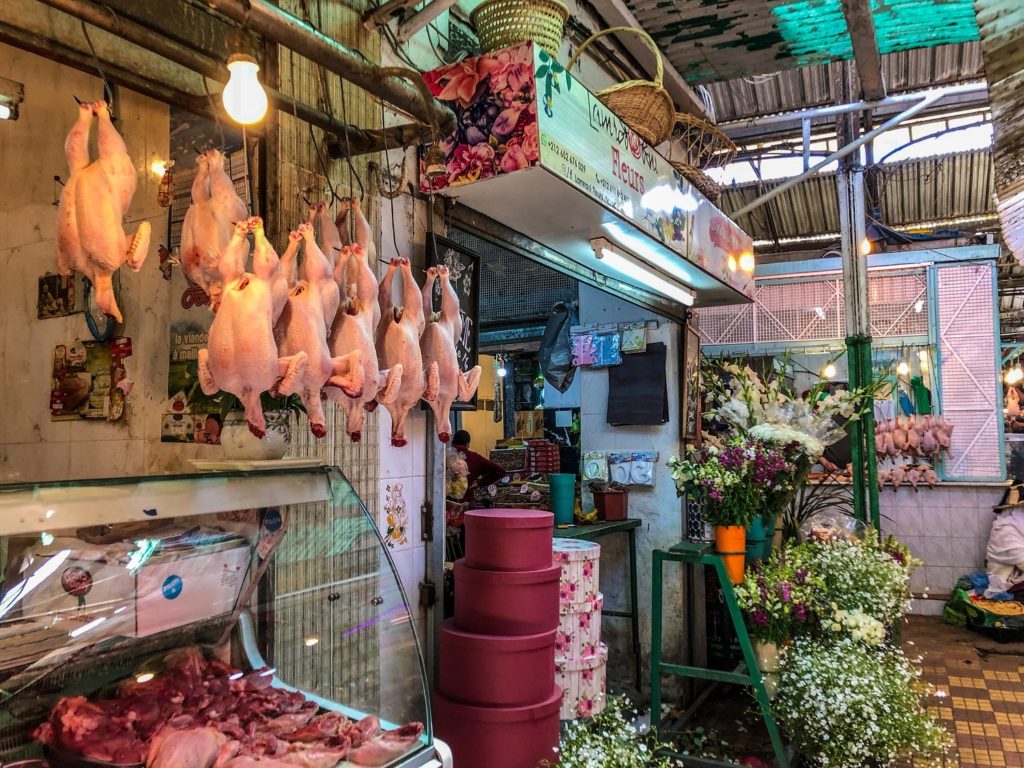 Here we could wander unimpeded through the lego blocks of Moroccan cuisine and see them in their raw, honest glory.

As we pushed deeper, we came into the fish market. Here was another massively overwhelming area of haggling, smells, sounds and trying not to slip. I stared, unable to process what exactly I was looking at until I felt Jackson touch my shoulder and point to a massive swordfish lying on the floor. Damn. That’s cool. 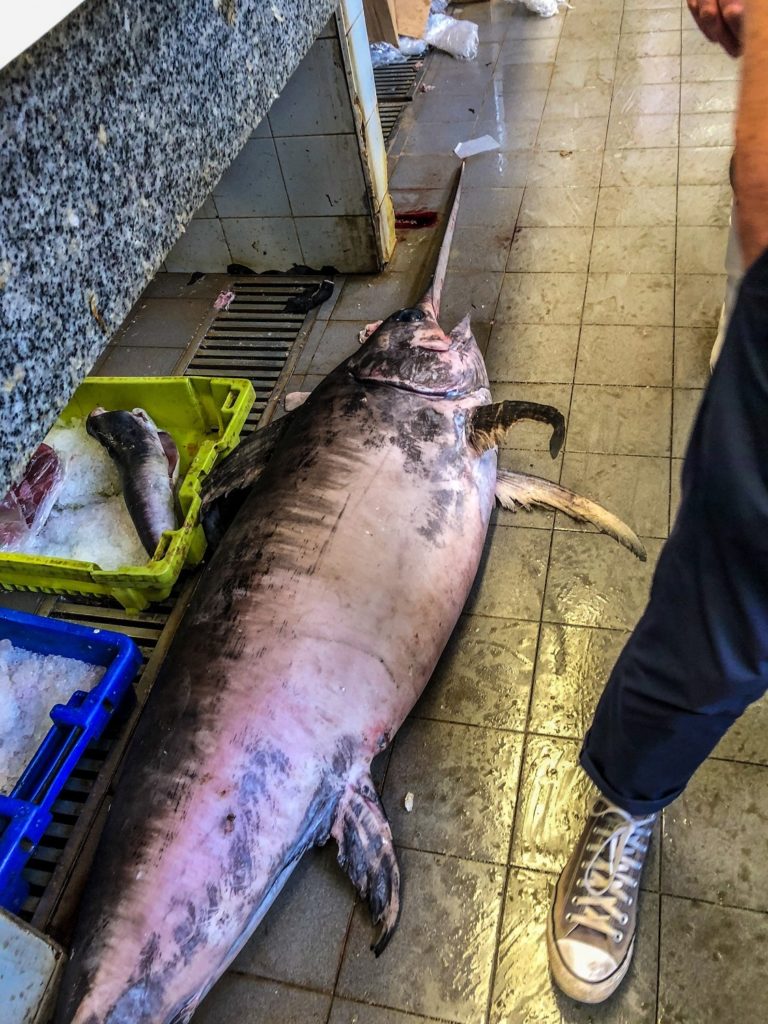 We branched out looking for a place to get lunch that wasn’t another disappointingly overpriced lamb tagine and found (wonder of wonder, miracle of miracles!) a totally unmarked, totally unpretentious, Anthony-Bourdain-would-have-been-proud lunch spot.

This place was nestled in a smaller market between a chicken stall and a vegetable stall. As we ate, we could hear them killing the chickens in the next store which is not exactly a Beethoven suite, but, hey: it is what it is.

No one spoke English there but food is an international language and “that smells good” can be understood by everyone in the right context. The chef, a burly, sweaty man with meaty hands, gestured for Jackson to come and look at what was boiling on the stove and point to what we wanted. Jackson got us some fried sardines and HOT DAMN they were the best meal we ate! This place was unmarked, and had no name, but was located here.

We wandered all over the old city

Tangier, like Chefchaouen and Fez, has small streets that lead to different entrances to the medina. Unlike Fez, however, we really weren’t harassed about getting help from street urchins so that was a nice change. I enjoyed wandering around and snapping pictures of the white buildings, islamic patterns, and old stones.

At one point, we emerged onto a wall overlooking the straight of Gibraltar and the ferry port. Across the Mediterranean we could see Spain. I felt such a thrill about going back to Europe. I enjoyed the exotic flavor of Morocco, but overall didn’t feel the romance I had thought I’d feel being there. 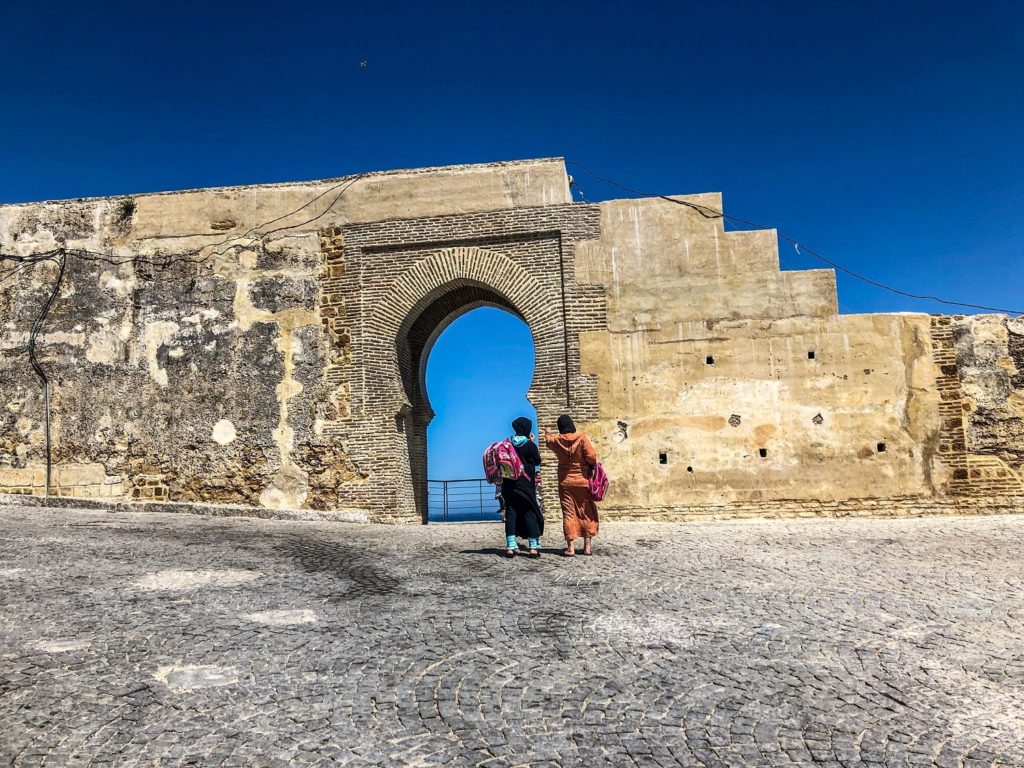 We ambled over to the newer, upgraded area by the port. This had been turned into a brand new beach front area with clean, empty sidewalks that had beautiful people out for a jog. It was really windy when we went, but I was impressed by the effort to create a cleaner, more modern vibe to this city. The new area peters out into small, smelly fishing docks and I remembered where we were again.

Everywhere we looked there was new construction and cranes, except in the medina. I want to say that Tangier is going to be completely different in a few years based on what we saw. It feels like the whole world is like that. I was reminded of Colombo’s boom and how Sri Lanka will be unrecognizable in a few years. This makes me excited for those ready to pull themselves out of poverty and live their best life, but also about the coming globalization and modernization that wipes out the charm of a place.

On our last night, we heard a commotion from our hotel room. Looking down at the square, a crowd had gathered around a group of musicians playing rousing African beats on some drums and african stringed instruments. The men drinking mint tea in the cafes had started clapping to the beat as a massive group of people formed, whipping their cameras out to film the music. From our balcony I could look down at the heads of these people all enjoying the show and loved that I wasn’t on street level for this. I clapped along with them and thought about throwing coins from my balcony before realizing that whomever’s head I’d hit would not appreciate the gesture.

The music ended after a couple of songs and the crowd dispersed and I felt a wonderful sense of joy.

Jackson and I retired back into our room and I savored the thrill of listening to that African rhythm. Then, the call to prayer came on and the cracking voice of the imam rang around the street like a radio with a bad frequency. It was the equivalent to eating a good desert and then having a pickle put in your mouth. With the oncoming upgrades, will they give the call to prayers a better loudspeaker? It felt like a good analogy for this city: at times a fantastic place, and at other times, better to skip altogether.

Tangier was a part of our Moroccan itinerary. We were in Morocco for 5 days total.